I’d try to explain the issue by an example:

So that is the issue I face.

Is there a way to see a list of those “deleted” files?

I’m running ROCK on a NUC8i7 with all libraries located on a Synology NAS.

Do you have the deleted items folder on the NAS within your share path?

I would agree with @ged_hickman1’s suggestion, I think the files are just being moved to your trash folder on synology: https://www.synology.com/en-us/knowledgebase/DSM/help/DSM/AdminCenter/file_share_recycle

Do you have the deleted items folder on the NAS within your share path?

I didn’t do anything between cleaning the library, seeing no deleted files, and Force re-scan of the folders.
So no other deletions, but they re-appear, so I’m curious about what files this algorithm finds.

No, I have not enabled the Recycle Bin on the Music share, where all my libraries reside: 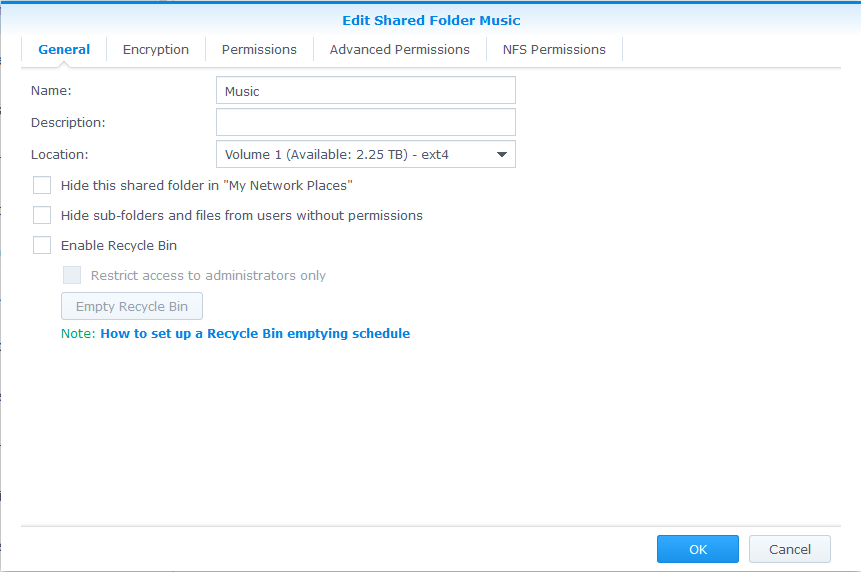 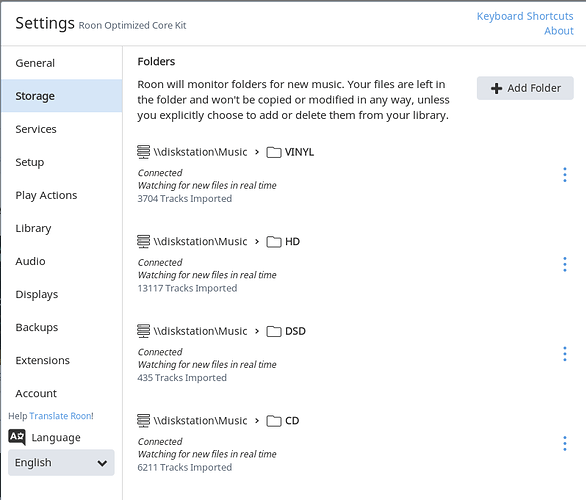 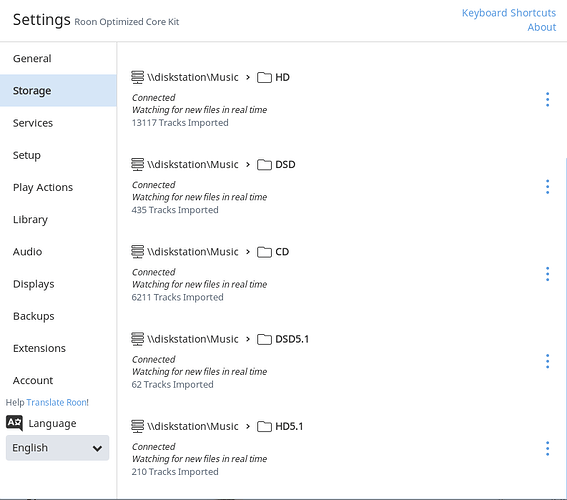 I noticed, that it happens when i Force Re-scan on a specific library folder,
and the number of albums increases during re-scan, while immediately getting back
to the previous number of album a little later - just like when you rename a folder.
Even though I didn’t change anything between clearing the deleted files and running the forced re-scan.

Did you physically delete the files or just move them?

I use this feature a lot , Move a file(s) , correct tags, clean up , return to watched folder

Works perfectly for me

The thing is, that I have not deleted or changed anything between the “Clean up 48 deleted files” (which get the number down to “Clean up 0 deleted files”) and the Force rescan, which re-introduce the 48 new deleted files…

So, no I haven’t deleted anything, renamed any files or folders, or moved any files - between the Clean and the Rescan…

I’m very well aware about which folders I watch - they are all located under the \diskstation\Music - nothing else - and no one of the folders are with a Recycle bin, as they are all under the same Music shared folder on the Synology NAS…

And yes, I do change the folder names in order to groom my library - just not in this example…

This is just a wild idea, so sorry if it’s no help…but you’re not backing up your Roon database to your watched folder, are you?

but you’re not backing up your Roon database to your watched folder, are you?

No, you’re right.
I have all music in my Music share but I only watch specific 2. level folders like Music/HD and Music/VINYL.
The Roon backup is located in the Music share, but is not any of the watched folders.

Thanks for writing anyway - it could be something I just missed.
BR Jan

Do I need to do something special to close this support case?

Reason ? : I manage to find and isolate the issue that caused this behavior

It turned out I had two folders called almost the same:

which works well on the Synology NAS but definitely not on Windows and apparently not on ROCK as well. So I had to do the following to get it completely fixed: