Cleaning up albums/tracks with merged multi-artist

I am brand new to Roon, and looking for advice on how to best clean up artists that Roon has merged into a single artist after the initial scan of my music library. The internal metadata for these files has “name, name” for the artist field. I see that “,” is not part of the default import settings. However, I am a little leery about adding it as I also have a fair number of files where the artist name in the file’s metadata tags is recorded as “lastname, firstname”. Some of these are also compounded with multiple artists for the same file. (Also, if the import settings are changed, will Roon go back and re-scan the entire library? Or will the already imported files have to be manually corrected no matter what?)

There is a fair bit of this, so suggestions on how to do bulk corrections is also appreciated. (Note that I generally use the metadata tags as they come from the services I’ve purchased the music from, and none of them have used “;” as the artist separator.)

A couple of points: 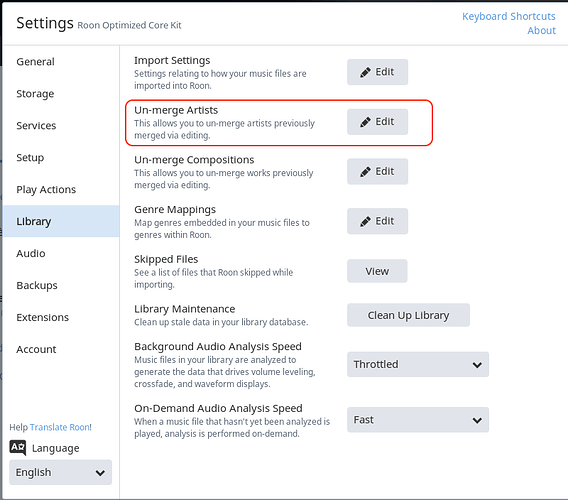 Then you’ll see a screen something like this where you can choose the artist(s) that you want to un-merge: 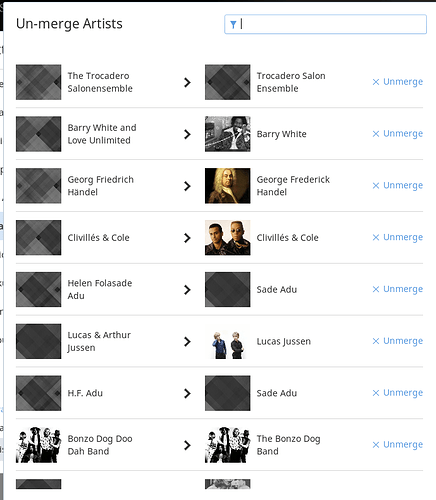 Apologies, “merged” was a poor choice of word since that’s an explicit feature in the software. What I meant by “merged” is that Roon is creating a new artist that has the name “artist1, artist2” as a “merged” name. Not that I’ve used the merge feature to mark two separate artists as equivalent.

Also, can separators in import settings be more than a single character? I am guessing maybe, since it mentions to split separators with a space. A lot of dance music has the artist field in the form of “artist1 feat. artist2”, so using “feat.” would help split those up. If it does support this, is the match done case insensitive?

No apologies necessary; my fault for not understanding what you meant.

Personally, I’ve found that a little work using a third party metadata editor such as Mp3tag or dbPoweramp to massage odd metadata helps Roon enormously to import tracks and albums.

You may well be able to use “feat.” as an additional Tag delimiter in Roon. Try it in the File Tag Delimiters setting in the Import Settings with a few sample albums to see how it goes.