I often experience a frustrating metadata issue when importing new music files to Roon, with incorrect metadata that I can’t seem to be able to edit or correct. I tag all my files manually (it’s time consuming, but it’s a labour of love :)) – artists, composers, production, years etc. Basically I only want Roon to display these tags and nothing else. I also manually uncheck all the credits once a album has been matched. Still quite often I find that Roon is displaying something incorrectly, and I just cannot figure out where it comes from or how to correct it. Let me give you a recent example where I imported Jeff Beck’s “Blow by blow”: 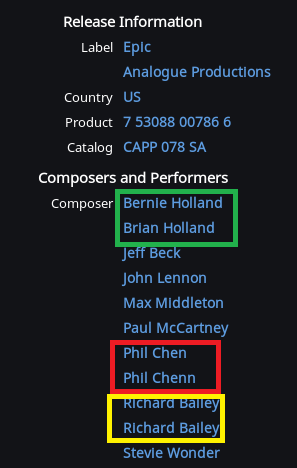 This is a screen shot of the credit section, and there is a incorrect “Brian Holland”, a incorrect “Phil Chenn” and for some reason “Richard Bailey” is listed twice. Let’s use “Phil Chenn” as an example. If I press the name, it seems to originate from one song – “AIR Blower”. I’ve triple checked the file itself in MP3tag, and don’t see any “Phil Chenn” in any of the tags I use. Everywhere else in Roon no “Phil Chenn” is to be found, including the song credits. From here I don’t know what to do or how to correct the issue as I have no idea where Roon fetches this name from.

Any ideas how to address this?

Settings, library, import settings allows you to use your own metadata rather than roons

Should have mentioned that has already been set in settings, using tags/file instead of roon… It still produces these incorrect results. 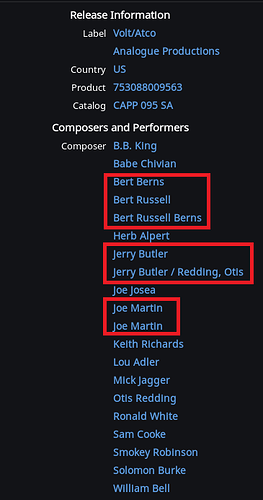