With the new Roon 1.8 software, after I clear my history and then go to the home screen, my recent activity cache has not cleared and all of the music I have played is still listed even though my history screen says that I haven’t played anything yet. Also, if I select items under recent activity, there is no way to clear them. There used to be an edit option that allowed me to do this. This goes the same for trying to clear recently played live radio stations. I don’t like the Christmas radio stations to be listed year round and want to clear them.

I didn’t know you could clear History, how did you clear your History ?

Or are you thinking of the Queue ?

Before the update, I could clear the queue as well as all my history. I don’t remember how I did it because it’s been since November that I used my stereo due to an amp failure and now the update has taken place so I don’t have 1.7 anymore to be able to show how I did it. If Roon doesn’t allow me clear all my history, I’ll need to find a different software package that allows me to do so.

You can still clear your history in 1.8 (or transfer plays to another profile):

Right-click/long press the tracks you want to remove, then click Edit (top banner): 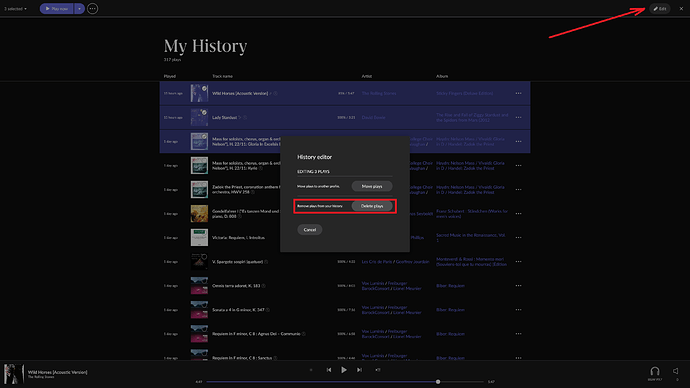 @Robert_Stahle - after clearing all my history the ‘PLAYED’ tab is now removed from the ‘Recent activity’ panel and resets the ‘Recent listening’ panel, on the Home page:

But not from the ‘RECENTLY PLAYED’ tab on the ‘Live radio’ panel on the Home page, nor on the ‘Live Radio’ screen>Recently played.

I’ve done those exact steps that you show. When I perform them, tracks will clear from ‘My History’ but not from the ‘PLAYED’ tab that is found on the ‘HOME’ screen under “Browse” as it does on yours. I’m using an Apple Mac Mini for the core and controlling it with an Apple iPad Air 3rd generation with the latest Roon Remote loaded onto it. All software has been updated. I just tried it again and still no luck, it only clears the tracks from ‘My History’. Even if I clear all the tracks from ‘My History’, the ‘PLAYED’ tab remains along with all the track history I supposedly just cleared. I also don’t see any way to clear the radio stations found on the ‘Live Radio - RECENTLY PLAYED’ tab.

Yep, I’ve just found a few albums that persist in PLAYING after deleting my history again, and some that aren’t showing up at all after playing tracks.

I would see if you can find any pattern in those remaining for you, if you are using an older install/database with a long played list, you might be better able to see what is going on?

Are any of the albums from your local library removed from the PLAYED tab sucessfully?

Looking at when albums were added, do you see any older than 14 days? I think this was the time period that the old ‘New’ banner appeared on albums, something similar might be going on?

That kind of thing…

Sorry, not to be more help.

As a poor workaround, you could create a new profile, which can be deleted once the issue is resolved - at least you know you won’t be adding to the list of albums in PLAYED.

I created another profile, and in my original profile played tracks from the albums I am still seeing in PLAYED. Then I moved my play history to the new profile.

Back in my original profile, the album of the track I played in the new profile doesn’t appear.

Thanks for the report, @Robert_Stahle

I’ve passed this along to the team to investigate further.

It looks like Roon tech support is going to look into the issue.

Thank you Dylan for looking into this issue. Please don’t forget to include the fact that I cannot clear recently played live radio stations as well.

Any update on this? None of the software updates so far have resolved the issue. Also, there doesn’t appear to be a way to clear my search history either.

I spoke with the team about this — At the moment there is no mechanism within Roon to remove Radio Stations or Artists from the Recently Played section. Generally, as you play new content, it should push the older content down the list so you’re not seeing it.

Can you elaborate a bit on why you’re wanting to remove some of this content from this section?

One potential option is to use different Profiles in Roon, since this section is different for each profile.