Recent Roon trial installer here. Impressed with the software, but having issues playing back high-res and even CD quality music on my main workstation.

Core is running on an older machine, mid-2012 MacPro, running High Sierra (10.13.6) with a Presonus Firebox as an output DAC, connected via Firewire. This is a machine I’ve used for recording and mixing music at >48KHz and playback is flawless with other software, e.g., Logic Pro, iTunes, Audirvana. Machine has 16GB of RAM and an SSD for the main drive. Music predominantly Apple Lossless stored on a local RAID mirror on spinning disks.

On Roon, the problem is most noticeable with 96KHz/24 bit files. I get occasional rapid clicks in the audio stream. Either drop-outs or jitter-induced sync. It almost sounds like static. This distortion is not present when I play the same files in another player.

I’m running my device in Exclusive mode, Large CoreAudio buffer enabled. I’ve tried power of 2 buffer sizes with no effect (it actually seemed to worsen the issue). I’ve turned off the DSP engine entirely and raised the clock priority to Highest (1).

I was able to stream to another Mac in my home connected to my main AV rack. It’s an even older Mac Mini (2009) running macOS 10.12. That machine has an AudioEngine D1 DAC attached to it and I didn’t notice any playback artefacts on that machine.

Any help appreciated. Thanks!

I have searched and found other users reporting issues like this in the past. Not sure if they were resolved. I plan on testing with another USB connected DAC on my machine in the next few days, but am hoping someone has a solution for my current DAC.

Can you describe your network and how all the devices are connected to it?

Definitely give this test a go when you’re able to. It would be a great data point to know whether the same content has issues on another endpoint or if the problem is isolated to that specific device.

Interesting question considering playback is entirely taking place on one local station. Nevertheless, I’m connected via ethernet to a switch to the rest of my LAN. I currently have one other end point installed on the same subnet on another switch, connected via ethernet. Both switches are connected to my main router.

On wireless, I have three to four airport devices. The number varies. I have yet to try streaming to them and was considering replacing them with Roon Bridges to get around the inherent limitations of airport.

I have a somewhat complex network, BUT, that shouldn’t affect playback on the local Roon Controller + Endpoint, playing directly from connected drives. If it does, that’s a problem. 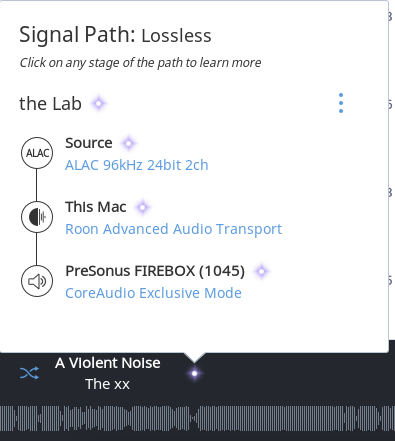 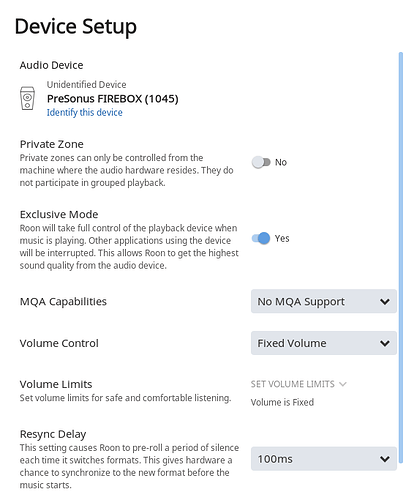 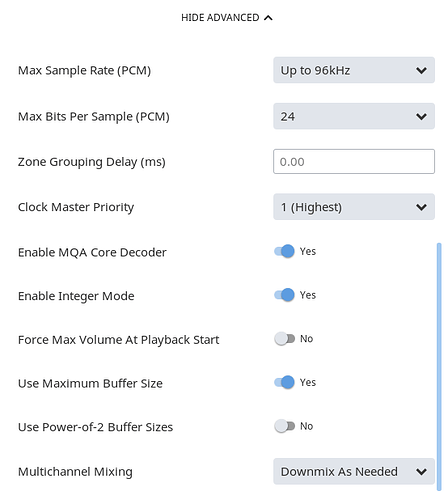 Have you had the chance to try out a USB DAC?

I have finally had a chance to plug in my Fiio E17K into my desktop machine and it does indeed seem to play cleanly. I don’t hear any pops or crackling on files that were problematic on my other DAC.

Only differences in setup are using Device Volume on the Fiio compared to Fixed on the Presonus. I’m also going direct to headphones from the Fiio, bypassing my mixer, but since that hasn’t been a problem in the past, I doubt it’s an issue here.

thanks, I’ll consider this resolved.