Ive changed the setting according to Andrews advice, but still had the popping/clicking issues when changing the Resync sample/bit rates, but to less of a degree. I still need to play around with these setting before giving my final results, I just had a busy weekend and haven’t had the time, but I will keep you informed. Thank you for the reply.

Sometimes a reboot of the Spring can help. Just means powering it off completely with the power switch at the back rather than putting it in Standby, wait ten seconds, then power on again.

I will try this as well.

I’ve powered my Spring DAC/SU-1 on/off for a good 1/2hr and I’m still getting the clicking noise while changing sample rates. I’ve set my Max Sample Rate (PCM) up to 768kHz (being my DAC/SU-1) supports this) and my Resync Delay is set to 100ms (from 50ms) and the Max Bit Sample is set to 24. Tonight I’m going to increase the Resync Delay to 500ms and report back.

Hi @Joseph ---- I wanted to touch base and see how your test with the increase to 500ms on the Resync Delay went.

Furthermore, if you are still having this issue with the “clicks and pops” after the mentioned adjustment, during your troubleshooting have you…

Hi @Joseph ---- Just touching base with you to verify that I have seen your PM update to me, thanks!

Moving forward, I think your idea of testing with the Holo Spring DAC mounted directly to the core machine is a very good next step here. Please let me know the outcome of this test and we can continue narrowing down some variables.

Lastly, did you get a chance to test with music being played out of the internal speakers on the core device?

Previous post: “Confirmed if you experience the same behavior via the system output on the MacBook Pro?”

I haven’t had the chance to continue my process of elimination due to being too busy lately. Tonight I just felt like enjoying some music without testing and launched Roon and was experiencing clicking/popping between tracks on the same album from a Tidal FLAC file 44.1/16 which was the first time this ever occurred.

I quit Roon and re-launched and the issue totally disappeared. Don’t understand what’s going on, very strange behavior. Anyway, I’ll report back on my initial issue with the popping/clicking noise while switching between sample/bit rates when I get the time. For tonight, I just want to enjoy the music.

Tonight when I launched Roon and started listening, there were pops/clicks before and after the tracks playing tracks, so I quit Roon and re-launched and all is good? This is the second time I’ve done this and it has solved this issue. Would you know why this would be? Has anyone ever experienced this same thing?

Hi @Joseph ---- Thank you for the update, I appreciate you touching base with me.

Moving forward, while I don’t have the mentioned DAC in front of me I can certainly ask our techs if they have ever experienced this behavior as I believe that we have one in our QA lab.

Furthermore, did you ever get a chance to try the the proposed tests mentioned in my previous post? Having this information will give us a better understanding where the error is occurring.

Yes, I’m sorry, I’ve done the tests with the same results. The only way for this to be solved is by re-launchning Roon, then I don’t have any issues with popping/clicking at the beginning/end of playback, but still have it while switching sample/bitrtes…this I can’t seem to solve even with the re-launch.

It would be nice if your techs have the Holo Spring DAC, I would like to hear about their finding when switching sample/bitrates, as well as why I need to re-launch Roon when I have the popping/clicking issue at the beginning/end of tracks, but after a re-launch, It’s fine?

Thanks for verifying this information for me @Joseph, very appreciated!

So based on your follow up, you experience the clicks/pops via the internal speaker of the core machine as well as with the DAC mounted directly to the unit? I just want to make sure I have all of your observations right before I ask for feedback from our techs.

Lastly, when you have a chance Joseph, can you also provide me with a screenshot of the signal path leaving Roon when you hear these pops/clicks?

You’re welcome.
I re-tested before replying, this time with different findings. 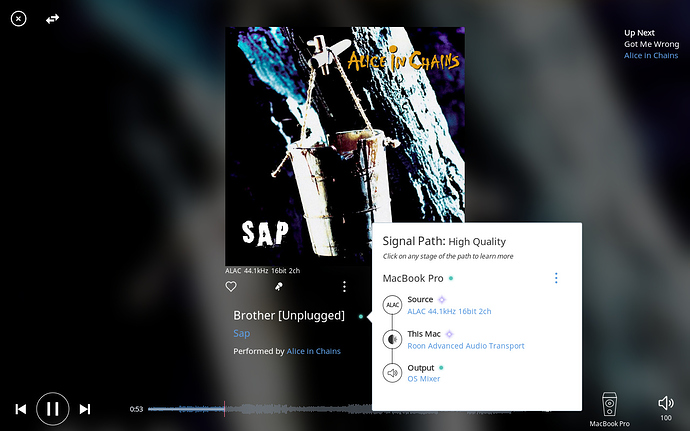 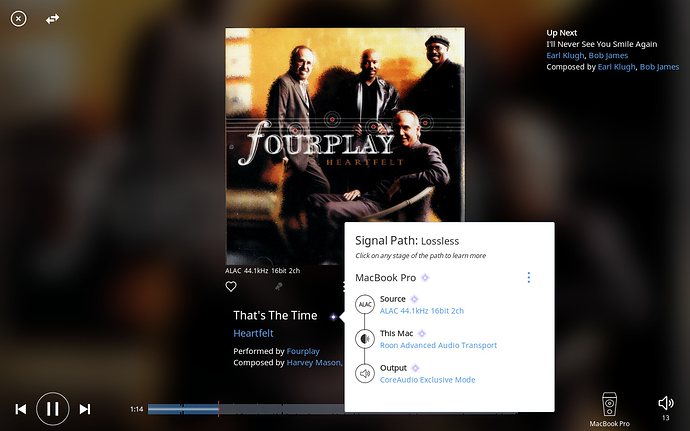 As I mentioned, strange erratic behavior, but now using “Exclusive Mode” with my headphones directly plugged into my MBP is proving to be seamless, which wasn’t the case the first times I did this.

One very important factor I just thought of is that when I’m using my main listening station I’m using a Cat 7 Ethernet cable with the uR.

Tonight I’m going to eliminate the Ethernet cable and go wireless with my main listening station. I’ll report back on my findings.

Geez, I’m really not having much luck with Roon. I can’t even sign into my account without it timing out, and I couldn’t type it in any faster if my life depended on it

I put my MBP to sleep to plug the Ethernet cable in and after wake up/re-launch of Roon the popping/clicking issue is gone (again) between the tracks now, but not between sample/bitrates. Much too much erratic behavior going on with Roon for me.

Hi @Joseph ----- Thanks for touching base with and sharing the results of your testing/the observations you have made in the last 24hours.

“Tonight I’m going to eliminate the Ethernet cable and go wireless with my main listening station. I’ll report back on my findings.”

“It’s definitely a no go without the Ethernet cable.”

“Geez, I’m really not having much luck with Roon. I can’t even sign into my account without it timing out, and I couldn’t type it in any faster if my life depended on it”

No, at first listen I had the issue “in both modes” but then it just went away on its own, which is why I mentioned the erratic behavior?

After the issue went away, in “OS Mixer Mode” switching tracks and sample/bitrates worked seamlessly with no issues whatsoever, but I still had the issue switching from PCM/DSD or vise-versa.

In “Exclusive Mode” I had no issues whatsoever in any way/shape or form…everything worked seamlessly!

I just tested with my Schiit Magni/Modi desktop combo via USB in “Exclusive Mode” and again, everything was seamless!

I can’t honestly say I recall using “Exclusive Mode” direct from the Holo, so I will try this tonight, as well as “OS Mode” again and report my findings. Sorry for any confusion, but I will admit, I’m getting a bit confused not having the time to test consistently.

I use the uR for AoIP, so when using this set-up there is no playback option for “Exclusive Mode”. This being said, I’ll be using the Holo in "Exclusive Mode via USB tonight. Sorry for any confusion in my posts.

I always login/out of a site, but lately when I login to Roon I have to do it twice.

@Eric
Here’s my outcome after 3+hrs of testing yesterday.

Introduced both the SU-1/uR via Ethernet and had the issue again as well.

I disconnected all power lines from my GFCI and plugged them into their own receptacles…still had the issue.

Removed the uR SD card and replaced it with another v2.5 card that I had purchased for my mR…same issue. I put the original uR SD card back in. Rebooted the uR several times…same issue. I put everything back to its original state and took a break. Last night I went to listen and Roon wouldn’t recognize the uR even after re-setting the settings several times. I shut down the uR instead of rebooting and Roon recognized the uR. Issue is gone, no popping/clicking at all, but I can’t say that I solved/found the issue, but I did eliminate it somehow/someway.

While doing all of these changes, please keep in mind that I had powered the uR/Holo/SU-1 on/off every single time I made a change. I just hope I remain without any issues.

I thank all of you for your concern and guidance in trying to help me solve this issue, and would still like to hear your input.

Happening again.
My next step is to change my Cat 7 Ethernet cable and try a Cat 6 which is what I used to use until the plastic snap lock on the connector no longer held the cable into my MBP and see what happens. I can’t continuously keep re-launching Roon and powering my Holo/SU-1 on/off in order for everything to work properly.

I’ve also read on this site that some had issue with Sonicorbiter v2.5 w/Roon. I’m chasing my tail at this point with the issue just going away and coming back intermittently. I was wondering if I should (if I could) purchase v2.3 and try it. I’m all over the place now.

Hey Joseph – we’re discussing this and we’ll get back to you soon with some next steps.

Just to confirm, you’re getting clicks and pops in with Exclusive Mode on or off, and with the DAC connected to the Rendu or directly to the Core machine? These occur in all scenarios, but a reboot solves the issue temporarily, is that right?

Using my MBP’s headphone out in Roon Exclusive Mode I initially had the pops/clicks…then it just went away and Roon played seamlessly in every way.
Same findings as above using my Schiit Magni/Modi combo in Exclusive Mode, everything was seamless.

No option for Exclusive Mode using the uR, but yes, a Roon re-launch fixes the pops/clicks while using the Holo/uR. I’ll need to check Tidal playback to confirm if I have the issue. I’ll let you know ASAP.