I have a copy of Colin Davis conducting Berlioz’ Symphony Fantastique with the RCO. Roon picks up the right review but seems to think the Vienna Philharmonic Orchestra is playing in the main artist link, and not the Royal Concergebouw Orchestra. 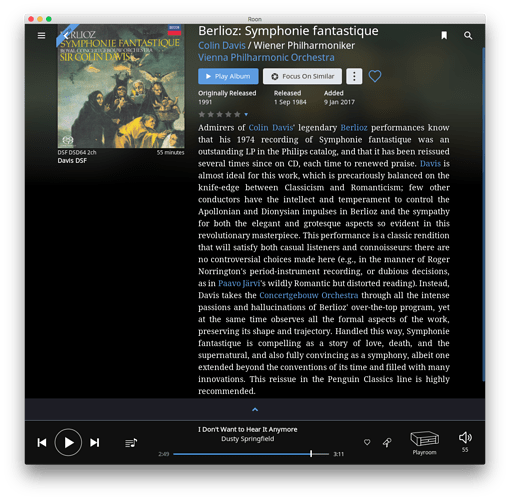 The RCO is correctly tagged in the metadata and is credited as the performer in Roon.

This issue has not been corrected after 18 months. The metadata appear to be a mash up between the correct Allmusic album which has the correct Ensemble and review:

If I attempt to re-identify the album it does not give me a choice between the two performances.

Wow, this one fell through the net; my apologies for that.

The metadata appear to be a mash up

Your assessment is spot on; we’ve equivalenced two completely different albums, one with the RCO and one with the VPO. I’m going to make an edit which should be available in 2-3 days.

As an aside, I’m pleased to report that this equivalence false positive does not exist in our new equivalence code-in-testing.