Compilation album not visible as an album

I have a Top 2000 folder, obviously with 2000 songs in it. All songs are tagged as “Top 2000 (2015)” album. In Roon’s album view though, all songs are visible as individual songs. In fact I have 2000 albums of this compilation, each with one song in it. As a matter of fact, also regular compilation albums are split up in single song albums. Why is that?
Now, and that’s where the folder view comes in. For this and some other reasons a folder view in Roon is mandatory, in my opinion. Most other music managers have such a feature. Some state folder view doesn’t belong in a music manager, but I disagree with them most strongly. I should say, if you don’t need it or want it, then simply don’t use it. Other users will be thrilled with this feature.

Perhaps add subfolders with (imaginary) CD01, CD02 etcetera, to prevent having to scroll down 2.000 tracks? Just trying to understand why you insist on a folder structure and if there would be other roads leading to the same Rome…

That’s just the point, all tracks are in the same folder. But it’s not recognized as one album.

Ah, then it’s probably the metadata. Do you have a metadata editing programme / app? You can edit the tracks as belonging to one album. This seems the easiest way to me. The other one is manually merging 2.000 tracks into one album in Roon itself, but that will take some time…

EDIT: Still don’t quite understand what a folder view would solve in this respect…

Well, if there should be no other solution available, then folder view would be the only way to see this compilation as a whole. But I could try metadata app again. I have tag&rename, I’ll give it a shot. Thanks for your suggestion.

I would infinitely prefer tagging and renaming, so Roon can display it as an album, rather than having to resort to a folder structure view. But again, this is all personal taste. Good luck, hope it works for you!

It partly worked. Picture this:
I have two 100 tracks compilations. I split them both in two CD-folders (CD1 and CD2) of 50 tracks. I tagged them with Tag&Rename, each CD with file numbers 1 to 50: “Track number - Filename”, “Artist” (different for each song), “Album”, “Track” (1 to 50).
After indexing by Roon I see compilation one nicely as an album, containing 2 CD’s.
Compilation two is all messed up in CD’s containing 1 to 3 tracks; this album has over 20 CD’s.
I do not understand this. I think Roon is a very weird program. I have never seen something like this.

Your metadata must be inconsistent. I have done what you are attempting many times to group similar types of tracks into fake albums. It is important that:

All tracks have the same album title
They are grouped into subfolders under the top level album title folder e.g. cd01, cd02, etc
Tracks in each CD folder are tagged with the correct disc number
Album Artist is listed as Various Artists for all tracks

Following the above has never failed to produce the desired result for me.
You can get away without the subfolders if your metadata is correct, but this can cause other programs issues e.g. Sonos, so best stick with subfolders for universality.

If you do not do the above, Roon will simply match each track that it can identify to the album it comes from. So you end up with hundreds of albums with only one or two tracks in each.

I already did all the important things you have written in your reply. Except for the artist tag, I have the artist tag set up as the performer of the song. And then again, why does this work in one compilation and not in the other one?
Of course I have tried to change the artist tag in “Various” or “Various artists” but that doesn’t make any difference. Still one compilation is okay, and the other one all messed up. And I can’t find any other inconsistencies.
Another thing is that I don’t have this problem with the library of my Bluesound system. Okay, maybe the database systems are not the same, but still…

there may be some confusion over Tag names here: There are two important (and different) tags:
‘Artist’ is the name of the person performing the song and is normally in the file path name after ripping
‘Album Artist’ is the Tag that needs setting to ‘Various Artists’ for compilation albums.

If you do not have Album Artist set to Various Artists, Roon will treat each song as a separate album for compilations.

I’ll try this, of course. But, on the other hand, I have a 82 CD compilation too, with the ‘Album Artists’ tag empty, and it’s displayed correct in Roon: 1 Album, containing 82 discs.

Update: Your solution turns out to be the solution (-: Thanks for that, Tony.

You’re welcome. Similar issues have come up before but finding the right thread can sometimes be a challenge.

I’ll try this, of course. But, on the other hand, I have a 82 CD compilation too, with the ‘Album Artists’ tag empty, and it’s displayed correct in Roon: 1 Album, containing 82 discs.

I suspect these work ok because the COMPILATION metadata tag has a value of “1” and Roon recognizes that. I have lots of “compilation” albums and for most the ALBUM ARTIST tag field is empty.

Interesting; I have never set the ‘Compilation’ tag on any albums. It does not show that tag by default in mp3Tag, which I use. Nor is the tag ever mentioned in support threads on such issues (IIRC?).
I thought that particular tag was an iTunes specific thing? I may be wrong though and have no idea if Roon takes any notice of it.

Interesting; I have never set the ‘Compilation’ tag on any albums. It does not show that tag by default in mp3Tag, which I use. Nor is the tag ever mentioned in support threads on such issues (IIRC?).
I thought that particular tag was an iTunes specific thing? I may be wrong though and have no idea if Roon takes any notice of it.

COMPILATION tag is not just for itunes.* It is also on FLAC files, mp3, m4a, etc. When I rip my CDs to FLAC with dbpoweramp, if it is a compilation and I tick that box, dbpa adds a COMPILATION tag with a value of “1”. All my servers/players have used this tag to recognize a compilation CD (e.g., Roon, LMS, foobar2000).

In mp3tag, open an album that Roon is correctly treating as a compilation even with ALBUM ARTIST blank. Select one or more of the files, right click, choose “extended tags” and then see if there is a COMPILATION tag. See picture for example: 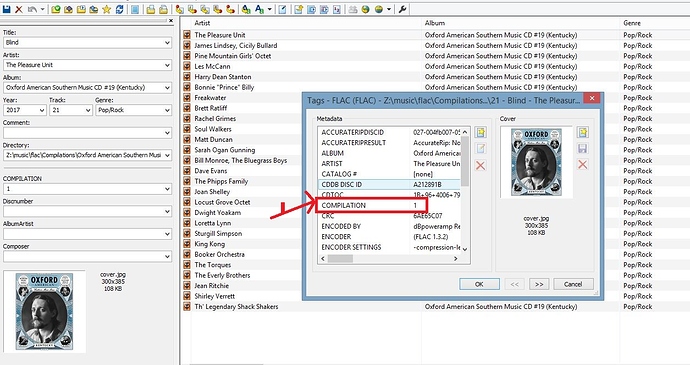 *note, there was a time when the itunes compilation tag was different that the compilation tag standard used by some other programs. That seems to have been resolved several years ago.

thanks for the info. I use dbpoweramp, but for the sort of random files I pull together when tidying up my collection, I would have no idea where they really came from in terms of a proper album or a collection; the tag could be set either way. And as I say, it would be useful to know if Roon takes any notice of this tag. Other music programs may though, so it could be good practice to set it when necessary. I never have (manually), with no consequences for Roon.
I think that where Roon is concerned, Album Artist can be blank so long as Roon recognises/identifies the compilation. That tag is just one of the clues it needs to identify the album. If you are just putting individual tracks into a folder to create a ‘fake’ album, that tag allows it to treat the album as a compilation.

With regard to iTunes, I started using that way back at the dawn of iTunes 1.0 for Windows when I was bought an iPod as a present. The scars still remain… I quickly abandoned it due to buginess, poor performance and poor quality tagging. I bought a piece of software that allowed direct management of the iPod contents; much easier to use.I still use iTunes on the Mac but only for Podcasts. Using it still makes me want to wash my hands afterwards though…

Tony, I’m 99.9% sure that Roon recognizes the compilation tag. I have hundreds of compilation albums, including many that are not “identified” by Roon (except for the tag information). And all of these show up in my roon library as complete albums (as they should). So that tells me that roon uses the compilation tag properly.

I still use itunes to load up tunes on my iThings from a separate lossy copy of my music library. It has become such a bloated program, that I’d hate to have to use it for my actual music library.

I have used the compilation tag for several albums now too, and so far it works perfect.