After using Roon for most of a year now, I’ve finally figured out a reasonable way to request what I find to be most missing in the software. I’m looking for a way to filter down to show only albums in my library for which I have the Complete Album in my library, either by adding the album or by individually adding all songs on the album.

For Tidal/Qobux, it appears that the metadata already exists to do this, given the display behavior when only a single or several songs from album is in the library: 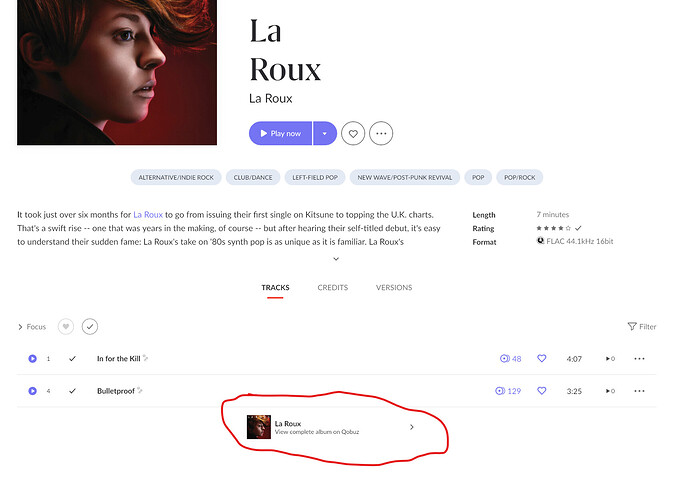 For local library albums, it seems like this could be done heuristically (using contiguous tracks or maybe even album metadata), but allow the user to override the “Roon Version” of a “Complete Album” tag. JRiver has a field that does this. When I still used it, I could create a custom field to get the aforementioned behavior. It really makes browsing a library with a large mix of complete albums (that I want to listen to as an album) and assorted tracks (that I’m more likely to shuffle or include in a playlist) much less frustrating.

I’ve seen some other posts that talked about using the “Contiguous Tracks” and “Track Count” Focus filters to do a user run heuristic filter, but this provides no way to override the results when they don’t fit the expected pattern. I have several single track albums that have run times around an hour and are definitely complete albums. I also have a few albums that have the first 3 or 4 tracks as part of my library, but not the rest of the album. An explicit bit of metadata would really help with this.

I’ve also experimented with manually assigning a user create tag in order to track complete albums, but in addition to being a tedious time commitment I seemed to run into some bugs when trying to assign the tags to Tidal or Qobuz tracks.