Hi, new Roon user here. I love it but Compositions and Performances have me stumped.

As you’ll see it’s created a composition for each of the 6 suites but it’s calling each composition Suite #1. I can go in and edit any one of those compositions and change it to the proper number but then they all change. I can’t change only one at a time.

When I look at the Performance it lists each Suite individually but three look identical (the first disc) and the other three look identical (the second disc). That makes me think, shouldn’t it be 6 compositions and 1 performance? I’m really not understanding how these are supposed to work and not being able to figure out how to edit them I can’t deduce Roon’s intentions or learn how it’s supposed to be used.

I’m looking at the metadata for the individual tracks and all the info there is correct. Basically, I have no idea how I got here or how to fix it.

Any guidance would be appreciated. 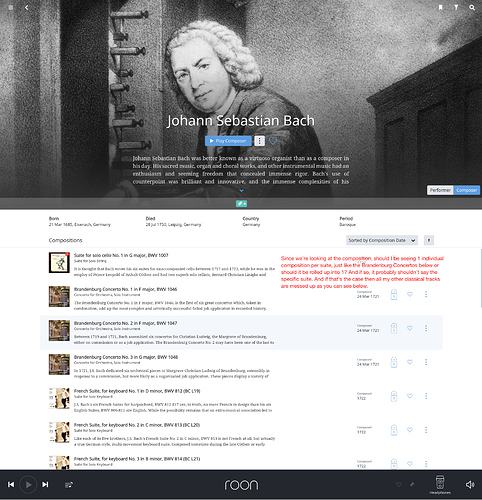 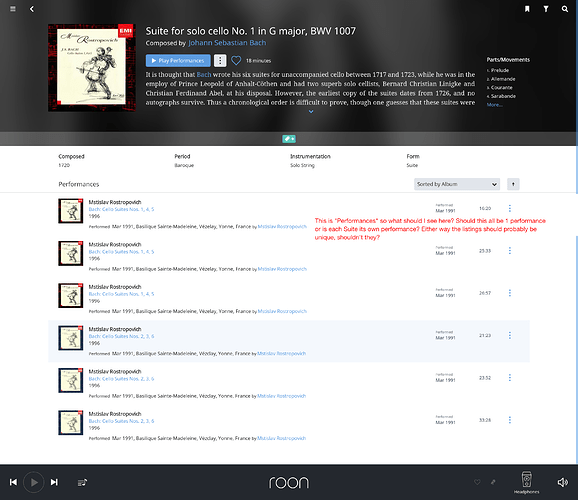 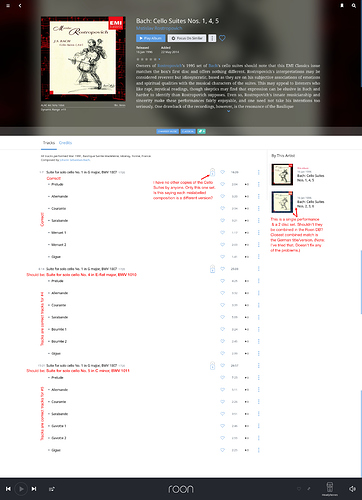 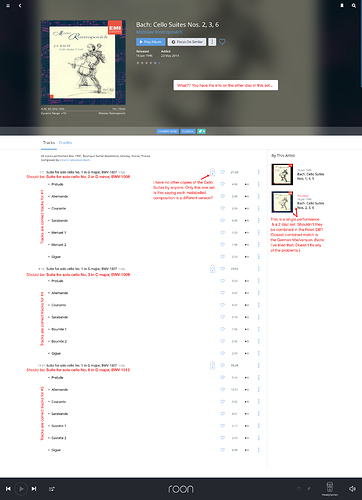 Thanks for the help. I followed the steps. Got the tracks looking like a very vanilla list of just the tracks. There were no groupings, compositions, etc. Unfortunately, after picking the matches from Roon’s suggestions continuing with your steps, I ended up back in the same spot. That mean it’s a problem with Roon’s metadata?

Here are the screen shots: 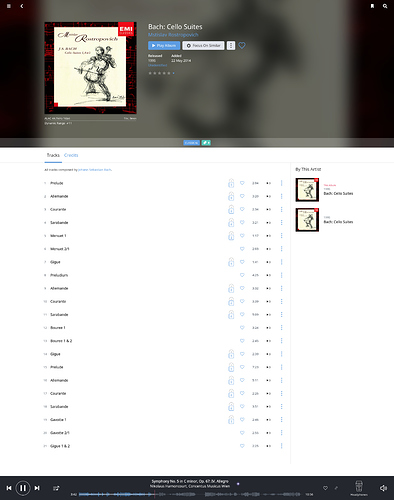 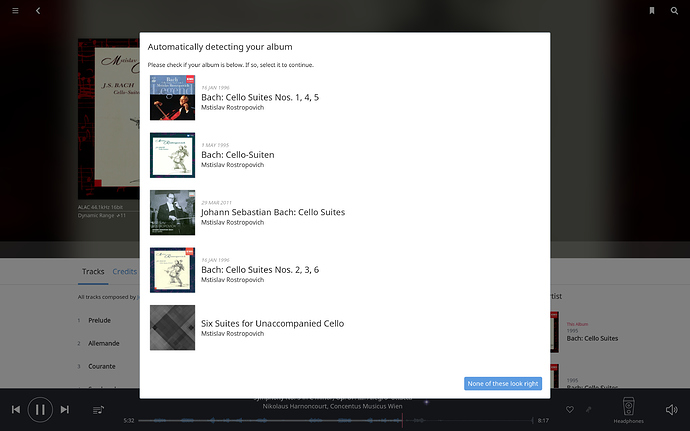 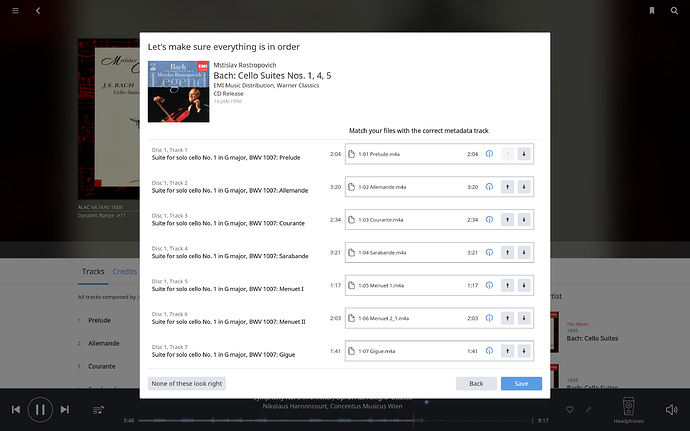 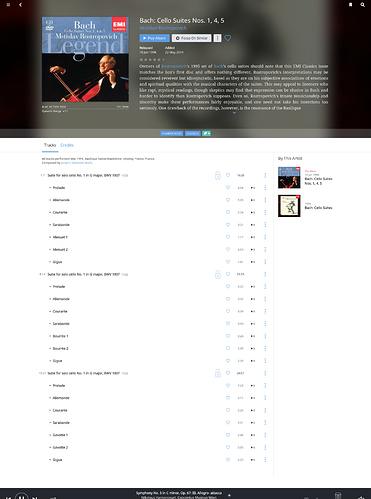 In case it helps, I followed the steps again but this time I merged the two albums (it was really a 2 CD set to begin with), and matched it to a different one in the Roon DB. Same results except now the two discs are under the same album. 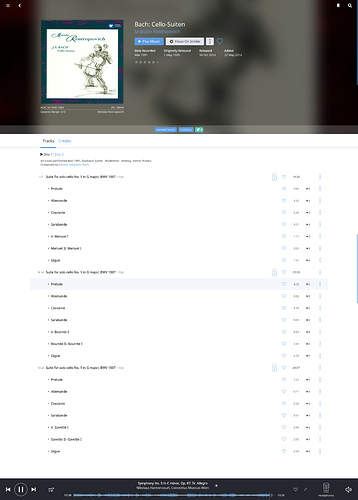 Good to know, Serk. Thanks for that info.

I thşnk the problem is a misidentification of works.
Since all works in the 3rd and 4th picture are the same. Roon identifies it as different performances and counts each as 1. Total 6 ı guess. If they had been identified corectly as your red text suggests. They would be recognized as different compositions

Weird. I tried loading the 2CD Rostropovitch album from Tidal, matching it against the 1,4,5 album you chose, and the three suites of CD 1 were correctly identified.as BWV 1007, BWV 1010 and BWV 1011.

Could I ask you to go on the Album page to Edit > Metadata Preferences and select “Prefer Roon” for everything that’s in there. Please check if that makes any difference.

I’ve even deleted the files, cleaned my library, and reimported fresh copies. No luck.

Of course the one screen shot I don’t show the whole thing of is the interesting one! ; )

All the tracks were properly identified. 8-14 did say #4, BWV 1010, etc. Same with Disk two and Suites 2, 3, 6. Everything looks correct. And the same when I combined them and tried the German title: 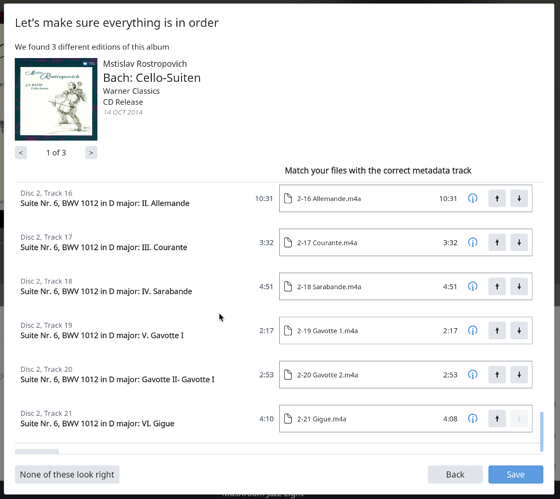 I already had “Prefer Roon” selected but I double checked that and reran all the steps. No change.

I feel like Roon (or I) got the bad info in place and now it’s stuck in a local DB or something and I can’t clear it out.

I’m going to delete these tracks from my HD, clean up the library, and re-rip the CDs. Maybe that’ll make a difference.

No worries, Serk. I love the app but the usability is a little on the poor side in places. It shouldn’t be this hard to create a mental model of how these concepts work or to tweak the settings or to be able to get back to zero and start over.

Still not at all disappointed in the purchase, so please don’t get me wrong.

of course, I no longer have the CDs…

Thomas,
I noted in your original post that the album tracks seem to have been ripped using iTunes. You said you were going to rip them again.Could you try this time ripping in FLAC using a different software, like dbPoweramp ? I am wondering if your problem could not originate from the iTunes-style tags,which are very different from the FLAC-style tags I am more familiar with. You could also try to retag your tracks using Mp3Tag, and see if this changes anything.

I know this is a lot of work…

I did rip originally from iTunes, a long time ago, but before switching to roon I’ve been using Yate to manage metatdata and Swinsain for playback. I wouldn’t think iTunes would still be a problem but perhaps it is.

No worries on the amount of work. It’s all good since I need to get them into a lossless format anyhow. I didn’t think I got rid of any CDs I hadn’t reripped in lossless so they’re probably in a box packed away. I’ll keep looking.

Sadly I can’t find them for purchase in lossless online. Qobuz has it but not for the U.S. market and I can’t seem to fool them with my VPN pretending to be in France.

Thanks for all your help. Since you’re not having trouble I imagine once I rerip them I should be fine. I’ll let you know if it’s not so if you don’t hear back from me that means it worked.

Thanks again. I understand the feature a bit more at this point at the very least.

Could you try this time ripping in FLAC using a different software, like dbPoweramp ? I am wondering if your problem could not originate from the iTunes-style tags,which are very different from the FLAC-style tags

I had a similar concern. As an alternative to re-ripping, try this:

@Ludwig, thanks for those tips. I just re-ripped. I wanted lossless anyhow.

@Andre_Gosselin, I re-ripped. This time I tried matching them to a listing from roon’s DB and it did the same thing as before. But, since they were new files the metadata on was cleaned up and if I don’t associate it with any album in roon’s DB then everything is perfect. I don’t get the roon insights, which is a shame since that’s what I paid for, but one album out of many isn’t anything to lose sleep over.

Is there a process I go to tell roon their data is messed up? A quick search in community and I didn’t see it but I’m also juggling ripping a pile of other CDs now that I’m in the mood. I may have missed it.

If you look closely at the tag information that you (very usefully) posted above, you’ll notice that the track and media numbers are inconsistent. Fixing these should sort out the problem: all media 1, tracks from 1-21.

I have checked the Roon metadata for this album and it is correct.

Thanks, @joel. I do see that now you point it out. I did already rip the files again into a better format so that sorted it out anyhow.

What exactly does “media” refer to? How would one know what numbers they should be? And if it’s 1 of 2 why should they all be 1 and not some be 2? I’m sure I must have messed them up somewhere along the way but I’ve never knowingly edited a “media” tag.

Sure. Media usually represents a physical disc like a CD, so 1/2 implies CD 1 of a two CD set (which seems incorrect for this album). I’m glad that re-ripping sorted things out.

I take it all back. It was still set to use file data. When I matched it back to the roon data it did the same thing. It showed six performances, of Suite No. 1. I looked for the media setting but none of these files have that label. I imported using xLD and musicbrainz db.

At this point I’m not interested in figuring it out. It’s the only album I’m seeing this on so it’s not a big deal. If I start seeing it in more places then I’ll have to come back, I guess.

It sounds like you’re quite confused. I’m sure it would be possible to sort it out…