Well, I was going to just let it go but then I had to try and get smart.

I should note. When I don’t associate this to the roon database and use the file data for both, everything looks just fine other than there’s no info on the compositions.

I should add, I do notice “media” is not present in the Kirshbaum files. I don’t know why.

Here are the album matches. Everything appears to be a match… 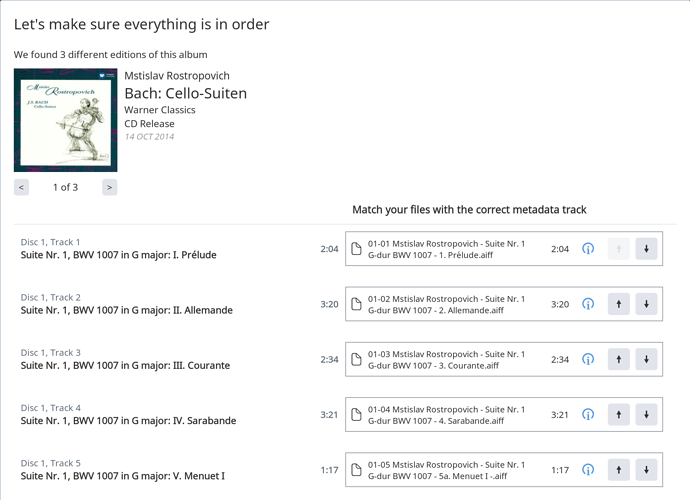 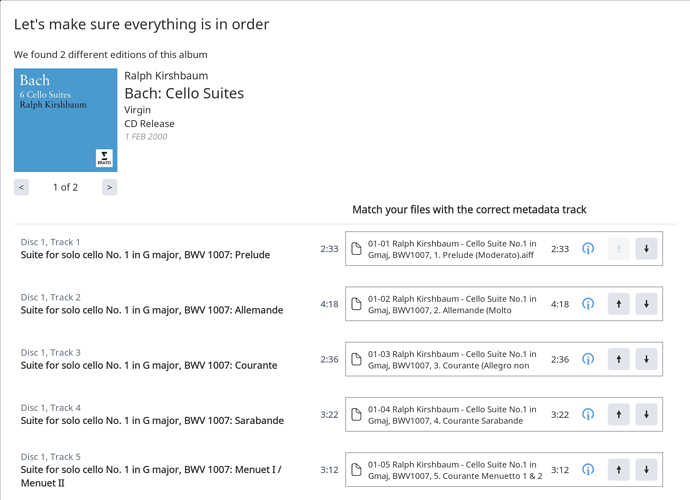 After all that I finally figured it out. Somewhere along the lines I merged something into something else. Not sure which but I was digging around found the “un-merge” tab under settings. There it was. So I un-merged it and now everything is fine.

If I can make a suggestion, make it more obvious from an album or composition page that the it has been merged. That took considerable digging around to find. A good general rule, some exceptions apply, if you can merge them from a location make it so you can unmerge them from the same location.

even something as “simple” as this 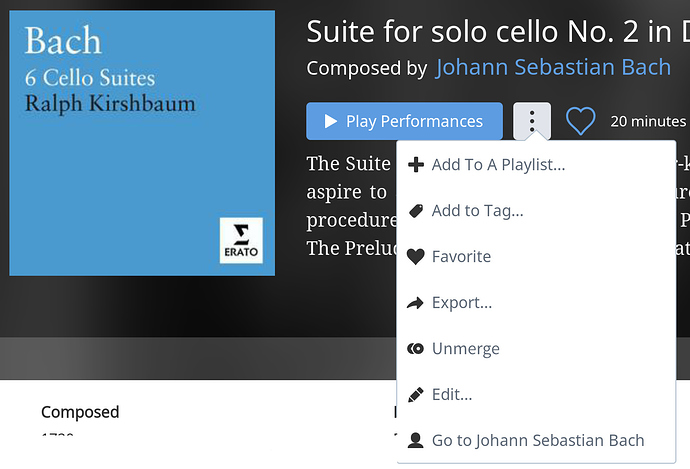 If I can make a suggestion, make it more obvious from an album or composition page that the it has been merged. That took considerable digging around to find. A good general rule, some exceptions apply, if you can merge them from a location make it so you can unmerge them from the same location.

That would potentially make the interface messy. We’re talking about an action you yourself have made, but if you don’t remember and need to check, the “merged items” dialogue has a very useful filter box.

[Moderated] if an interface let’s a user pit the self in a bind they can do better than sending them into settings, a completely unexpected place to find and edit data on specific albums.

The menu might not be the right place for it but settings is absolutely not.

Still, it’s something only design and testing can settle one way or another. You may be right.

If you want to make it “obvious from an album or composition page” that things have been merged, then [Moderated] Seeing as merging is proving to be a necessary and common process, your proposal would litter the interface with “obvious” markings (flags?) which would be very poor design.

Let me rephrase that…

Try to keep the discussion about the ideas rather than each other folks.

fwiw, @joel, if you’re still listening, to take this back to a feature request I’d like to point out a roon developer and two users, one of whom at least who appears to be a very learned user, didn’t see the problem despite my copious screen shots of all affected areas and despite me saying in the first place that I did a merge.

I don’t know the persona used for roon users so I can’t say what the solution is but that’s clearly a problem with the product. A new users can hang themselves using merge because it’s unclear what it does and there’s little explanation as to the impact it could have.

If it is as common as Ludwig suggests then there’s a problem to begin with that users are having to make so many merges.

If it is as common as Ludwig suggests then undoing merges, which can screw things up such that 124 people can view a conversation where the user error is pointed out at the outset and not one of them can provide a solution, is actually more important and should be elevated somehow.

It’s a high-end piece of audio software and your users are paying a good price to commit to it so I imagine you’re optimizing for efficiency of use over ease of learning but this impacts both negatively.

And looking around the community for conversations over “compositions” it sounds like roon is already aware there are many usability problems surrounding the current implementation.

Just some things to think about.

Hi Thomas, rest assured, when I get a moment, I will read through this to understand exactly what is going on here.