When I do a search on the composer “Jorge Ben” all his appearances on albums turns up. 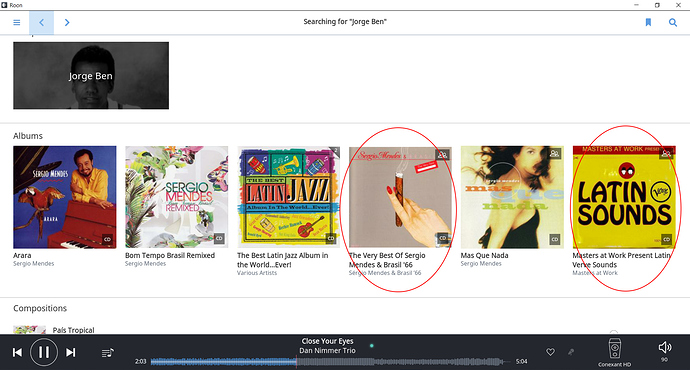 Whatever I do, on the circled albums his famous composition “Mas que nada” will not show as a composition and is not grouped with the other versions of Mas que nada. 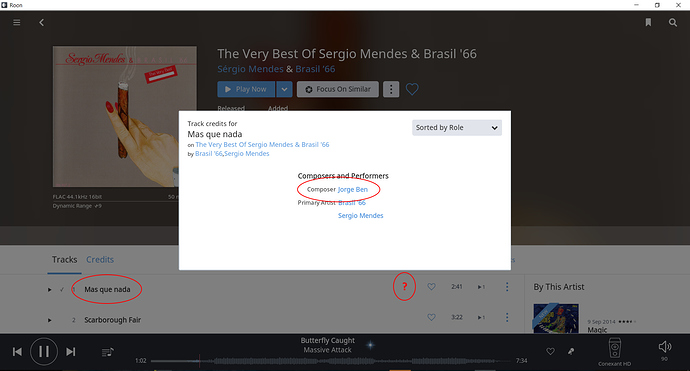 So only 4 out of 6 of the versions of Mas que nada are being recognised as compositions. @joel is there something I am doing wrong? I often have problems getting compositions recognised.

I think the exact logic behind recognition is being treated by Roon as valuable intellectual property, so they are , it seems, somewhat general in their answers.

In no particular order, I’d:

Thanks John. I’ve pretty much tried all of that. I have also found in the past that deleting all the albums, flushing the library, and re-importing in a different order can do the trick. In this case that is 6! combinations. What I discovered when doing all of this is that on the Very Best of '66 Brasil only 3 out of the 16 compositions were id’d. So it isn’t just the track Mas que nada that is a problem. Any ideas @support that I could try?

Thanks for flagging us down here @tripleCrotchet, the insight is appreciated!

I am going to have our tech team do some testing to see what we come with on our end. Once testing has completed I will be sure to share the team’s thoughts/findings with you asap. Your patience is appreciated!