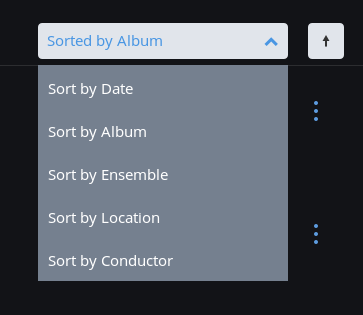 Sort By Album seems to Sort By Artist

Sort By Artist is Missing Altogether (Apart from above)

Sort By Ensemble & Sort by Conductor are meaningless for say Solo Piano, I would expect sort by Artist rather ?

Location to me is irrelevant , maybe not to all

As far as I am concerned any Composition will have an Artist , either a Soloist , conductor etc and that should be the most important and the default.

eg I have Alfred Brendel and Wilhelm Kempff recordings, when I open the composition Wilhelm Kempff is top, I click sort by Album Brendel goes top, its not logical