One major missing link is the “additive” filter for Genre in Composition view, which JRiver despite its UI complexity already provides

eg if I choose a Composer say Beethoven , then the next logical filter would be Genre

What is needed (in my opinion) is and additive filter

It has been a feature request for years BTW

Roon seems to use “Form” in preference to “Genre” for compositions - and this is additive. So you can (in the Composition Browser) use Focus to select “Beethoven” AND “Bagatelle”…

I think Roon have an object data model, which may well be at the root of some of these difficulties.

OOP code, done right, only makes things easier not harder.
(as someone who used to speak C++ fluently)

I would have to agree. I still think JRiver has value in certain areas. I like it for its file management capabilities. It’s much easier to see what’s in your collection using JRiver. And I still prefer JRiver for creating my own play lists. I just like the power of the Smartlist. Once you learn how to use the programming you can do all kinds of things. I’ve never warmed to the Focus technology in Roon. Having said that, Roon is my go to when it comes to music. I use it pretty much exclusively. I think JRiver is making a big mistake by excluding third party streaming services.

OOP code, done right, only makes things easier not harder.
(as someone who used to speak C++ fluently)

If Roon’s code was “done right” it would be simple to discriminate between a whole composition and part of it. As it stands Roon gives me a 52 second aria as an instance of the Bach Matthew Passion, a work which is typically two or three hours long. Whatever data model or OOP code Roon have, it is not “done right”.

“Work” and "part’ tags are your friends

Roon has complexity even then with whole sets and single pieces, take Chopin in Preludes , if it’s the whole set it appears as a set, if it’s odd prelude it shows as prelude no 12 etc. There are many examples, correcting external tags doesn’t help

There are loads of examples, take opera

One day JimH will wake up

Work” and "part’ tags are your friends

If only that was true. [Moderated]. Please explain in what way work and part tags could be my friends in resolving Roons inability to distinguish between instances of a whole composition and small parts of it, as evidenced here with the Bach Matthew Passion: 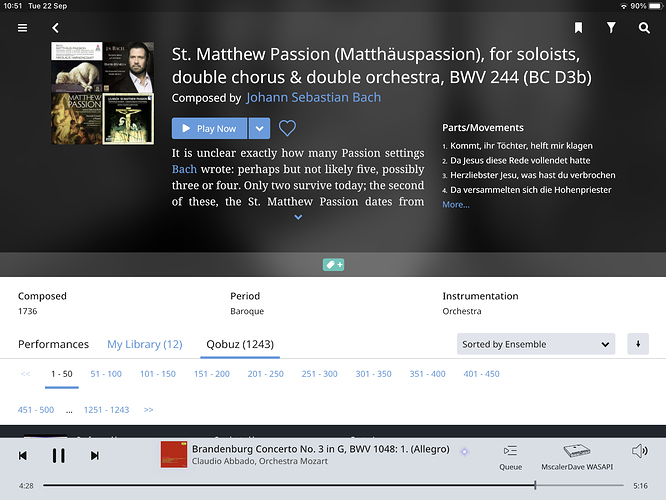 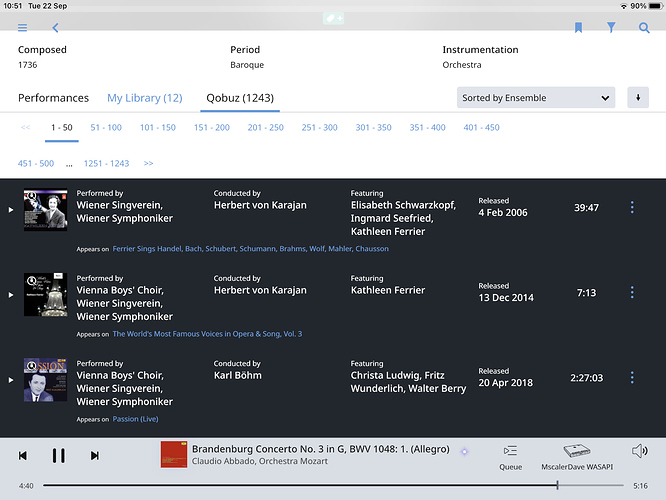 I’m only trying to help. [Moderated]

I don’t have the world’s most extensive classical collection, but I’ve managed to make Roon work for me. [Moderated]. Has it occurred to you that maybe I’ve managed to setup something that works for me? Your needs/demands are different, apparently.

I accept that some users with classical collections have issues. Those 250 disc sets are one example. I’d definitely never buy one of those.

Or for others maybe they can’t accept that Roon doesn’t do exactly what they want and won’t use a workable substitute that’s available within Roon. My guess is that some classical affiiciandos are extremely picky and ONLY their specific totally individual solution is acceptable to them.

No need to reply, I’m going to ignore this thread from now on.

I’m only trying to help.

What “workable substitute” is “available in Roon” to get close to the behavior of compositions that I and others expect? You have offered none.

Also, you say your solution to the boxed sets issue is not to buy boxed sets. Can you understand how absurd that is for the people who reasonably expect Roon to be able to cope sensibly?

I accept that some users with classical collections have issues. Those 250 disc sets are one example. I’d definitely never buy one of those.

Not buying 250 CDs that you want is not a solution to a problem that many would find acceptable.

Moderators have edited some posts to remove personal comments.

Please keep to the topic

Or for others maybe they can’t accept that Roon doesn’t do exactly what they want and won’t use a workable substitute that’s available within Roon. My guess is that some classical affiiciandos are extremely picky and ONLY their specific totally individual solution is acceptable to them.

Please explain what is being “extremely picky” about wanting a list of performances of a composition to be just that?

Please explain how you could use Work and Part tags to achieve this?

There are many issues with the Composition view and indeed Roon’s handling of classical music in general , that said Classical metadata is a mess of note. Who in their right mind would use the Artist Tag to store the Composer ? Deutsche Gramophon for one it would seem. (a historic effect of the original Tag Definition aimed at pop music and not specifying a tag for Composer)

Roon does a reasonable job where there is no complexity eg your average Symphony , Concerto etc . As ever Roon is only as good as the metadata it can find, so where its wrong its wrong at source

As @Jez points out in a Mass or indeed in an Opera it is common to find a single movement or a single Aria where Roon identifies it as “the Work” eg The Overture from an opera shows as “The Opera” so you can see many instances of that work in your local library or in Tidal/Qobuz that turn out to be a single track . Here there is no indication of which is a Full Work ands which an Excerpt so unless you know which is which you are lost.

Works in sets or single movements

A good example here is Chopin’ 24 Preludes Op.28 (indeed a lot of Chopin’s works) . It is common for artists to record an album of the complete set of 24, equally it is common for a Recital to contain only selected individual Preludes. This is where consistency goes out .

One could argue that each prelude is work in its own right ie Prelude Op.28 No.15 in which case all 24 should be separated out but this is clearly not the case here

Its a matter of consistency the result here is a mess …

No amount of adjustment externally of the Work & Part tags fixes this , you simply learn to work around it , not ideal. Other more customizable solutions allow a finer control but at the expense of a large manual intervention.

I have come to the normal love hate relationship, I put up with the bits I hate for the overall benefits of the bits I love. Its why I run 2 libraries . For even modest box sets Roon is quite unusable unless you have an encyclopedic knowledge of what music is on what disc.

Classical music is a minority genre but ignoring it doesn’t make it go away. The answer to poor handling of big box sets is not to buy them is a bit rude to classical fans to say the least, alas.

Oh Mike you are just being extremely picky. Just stop buying classical cds and you won’t have any problems.

That’s the clear solution. Only Justin Beiber and Brittany Spears CD’s from now on.

@Jez I knew you would solve my problem for me

Back to led Zeppelin