Like in this thread where roon had problems with duplicate artists, I have experienced several times in the last weeks that I am not able to merge some compositions. The follow-up screens reminded me highly on the topic shown.

Here’s an example with a simple track: 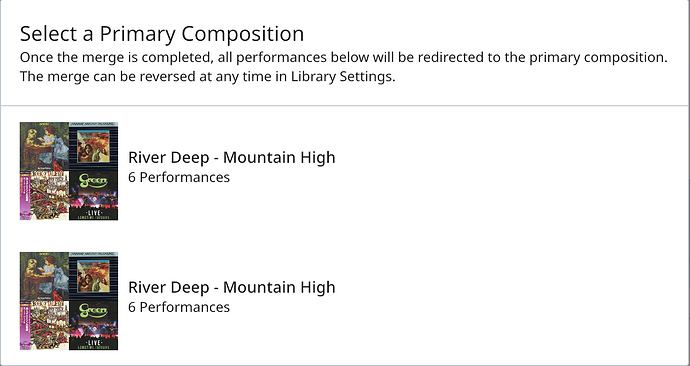 Ropiee on Raspberry 2, all working fine

You’ll find there is a thread on this already. It is a known problem.

But until someone can provide an example which the Roon team can reproduce, they can’t fix it.

Please try to find such an example! It’s really a big pain that it’s not been fixed yet…

Is this happening for you for all compositions or just certain ones?

It happens for certain compositions. I know exactly for 2 where it is the case. The one I described above and here’s another one: 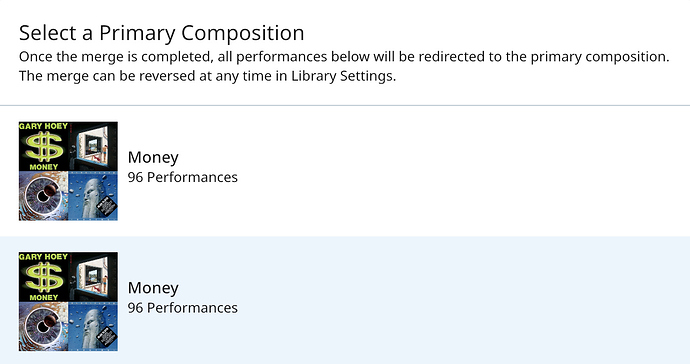 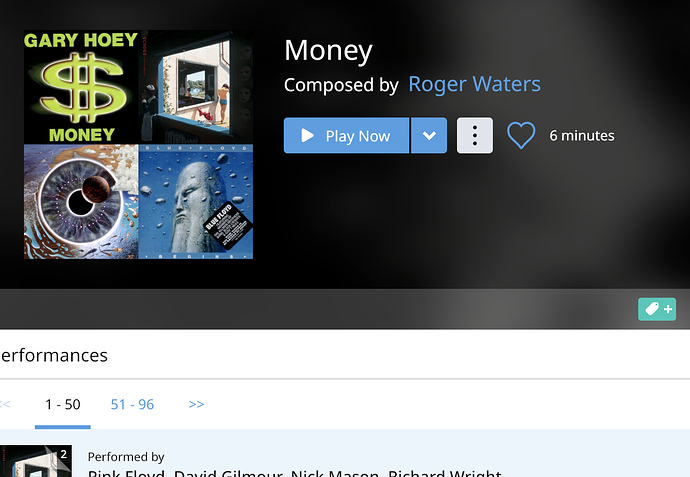 Hi Ludwig, can you point me to that thread? I did not find one.

Here’s another one… A bit weirder as roon states that the first entry has only 7 and the second 2 links. In the merge screenroon tells something about 13 / 4 performances which does not fit the earlier screen at all. The true result is 13 as the number of versions I got. 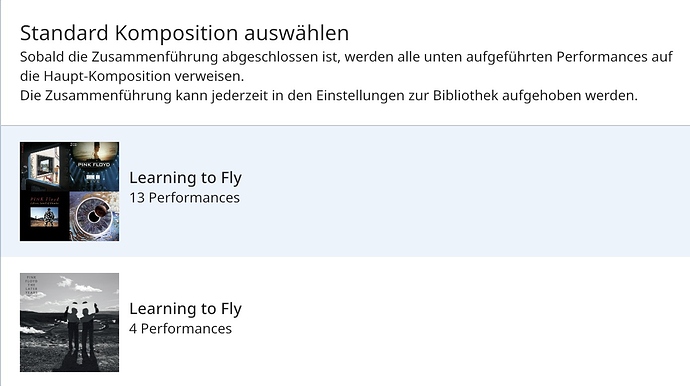 Since this post I added another Money version to my library. Now roon tells me that I have 2 versions plus the other ones. So it starts a new pile of versions as it looks like.

And another one on the same album (again building a new pile of versions): 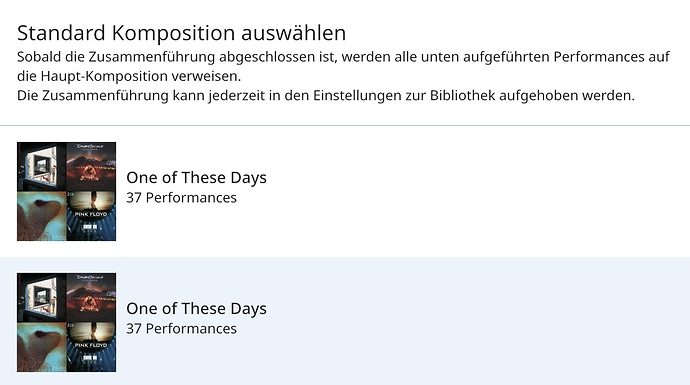 AFAIK, you can edit (and merge is an edit operation) only things that are in your library.

When you add content from streaming providers, it gets linked with Roon’s own metadata cloud which might contain additional/different information in contrast to the metadata from the streaming provider and that’s why a new pile gets created.

It’s all in my own library, no streaming content.

Any news on this? I can offer an attended Teamviewer or similar session to demonstrate and will probably also let someone from the roon team to investigate directly if that helps.

Hi @Ralf_Karpa — I’ve followed up via a PM with next steps.

Are there any news on this topic? It is still happening from time to time when I add an album to the collection. As in my examples above, I have seen this not being solved but added others as well. As being told, I shared my database but never heard anything back since then. Several minor versions of roon have been followed since then but not solving this misbehavior.

I have experienced this as well.

I try to merge compositions and sometimes it simply does not work. In all the cases that have happened to me, it has been that one of the pairs was already a merged composition.

I have found a workaround for the few cases where this has come up. I go to Settings / Library / Un-Merge Compositions and select the composition and un-merge it. Then I can go back and select all the occurrences and merge them, and it has worked fine. Hope this helps. Would be curious if it works for you.

yes, this works sometimes. I had to test them all out in some cases. In one occurrence I did not get it to work. However, I was really hoping that the roon team would fix it, but there seem to be no interest in solving bugs.

The other annoying feature of not having a composition at all, can most of the times be solved by picking an alternative album version, mostly the Vinyls work as they allow to enter composers with proper linking.

Time consuming, annoying, but that’s how it is and that is also why I did see your reply late as this forum hasn’t been very helpful when reporting bugs and I do not visit it regularly anymore.

most of the times be solved by picking an alternative album version,

Yep, thats what I do too.

Roon 1.8 didn’t fix the issue. I would have thought that open tickets would be closed before “modernizing” an interface. Underlying functionality should be more important than cosmetics.

Not only does 1.8 not fix this problem. I have the feeling it got worse.

Further: In the compositions tab of a composer, now all compositions of that composer known to Roon - whether any work is in your library or not - are displayed. In general, I find this great! Even better would be though if I could merge a not identified composition from my library on to the „correct“ composition next to it known to Roon but not in my library. This will not work in most cases.

And as we speak about the compositions tab:
- Could we please the have the numbers displayed as in the album view now with build 778.
- Sometimes, a merge leaves a greyed out composition until I open that compositions tab the next time.

I have the feeling it got worse.

Well, yes, it has gone worse, I know. However, the roon support shows very low interest in this topic. The only thing I keep identifying albums is because of the rezension is not editable. If that would be opened, I would not identify any of my albums as I always untick the provided metadata because it is in most cases very poorly managed. I add all metadata from scratch into the tracks (and very rarely get fixed, even when you ask for it - have at least 2 open threads for this).

My library is far too big for manual edit. I think classical compositions actually got better with 1.8 (or more precise with their internal update on December). Jazz standards etc. is very hard …