Concatenated Artists - Please Split Them Up

This Mozart Double Piano Concertos CD has Rovi metadata that has concatenated all the artists into a single artist. Please can they be separated out… 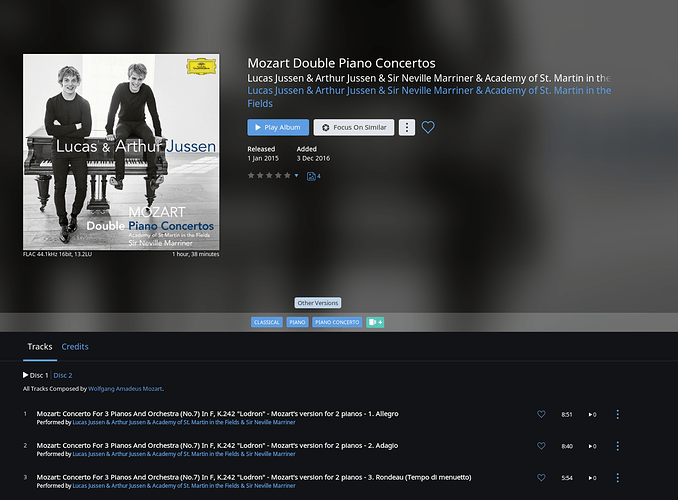 Thanks for this report @Geoff_Coupe. I’ve created a ticket to get this resolved.

Thanks for the alert on this one; the problem should be fixed this evening (though, as usual, might take up to a week to be picked up by your library).

Thanks @joel - and I think I’ve found another example; this time Anne and Jaz have become Siamese twins… 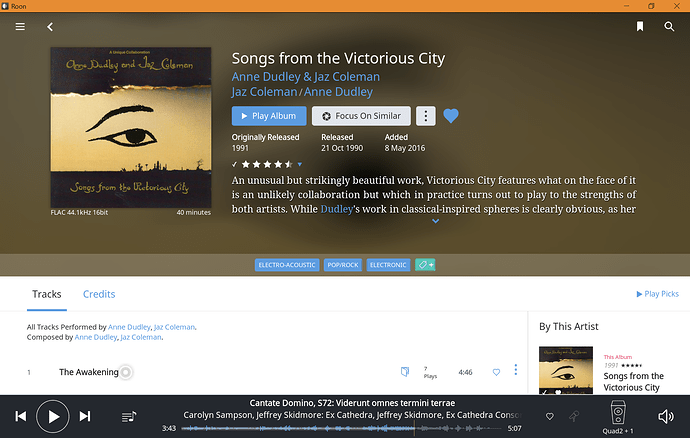 I’m pretty sure that this is unrelated. The weird thing is that the metadata look good from my end.

OK, I’ll take another look at the file metadata - it seemed OK at first glance… Thanks.

Can’t see anything untoward in the file metadata - both artists are listed separately. However, I notice that on the AllMusic page for this album, the two are merged into one artist: “Anne Dudley & Jaz Coleman”.

Hmm. That’s a 1.2 screenshot. The album artist string is indeed “Anne Dudley & Jaz Coleman”. I’m just somewhat surprised that we’re not parsing those two names out of it.

This “performer” name matches the album artist string, so we give it a link. Annoying.

The 3rd Roon line on the album details page consists of main performers who are not already linked to in the album artist string. There is possibly an optimization to be made here.