Concert Songs Ordered by Date, Set and Track Out of Order [Solved]

I have thousands of Grateful Dead concerts labeled using the same convention of “date, set number, track number” such as gd85-02-01s1t1. Unfortunately, Roon is not ordering things by set. Instead, it will put s1t1, s2t1, s1t2, s2t2 which makes everything out of order. It should be s1t1, s1t2, s1t3, etc. Is there a way to make this happen without having to edit metadata or reorder tracks manually? Thanks.

Additionally, all of these concerts, when played, their songs don’t show up in the queue, as a regular album would.

What format are the files in? Do the tracks themselves have metadata or is it all just in the file name?

They are all FLAC, with no metadata…all in the file name. 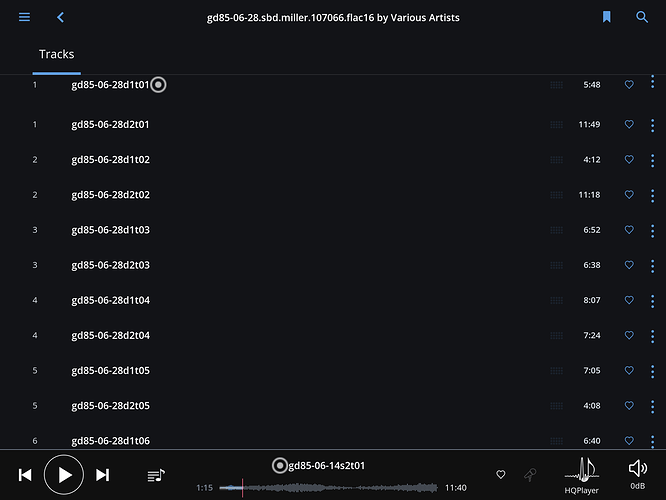 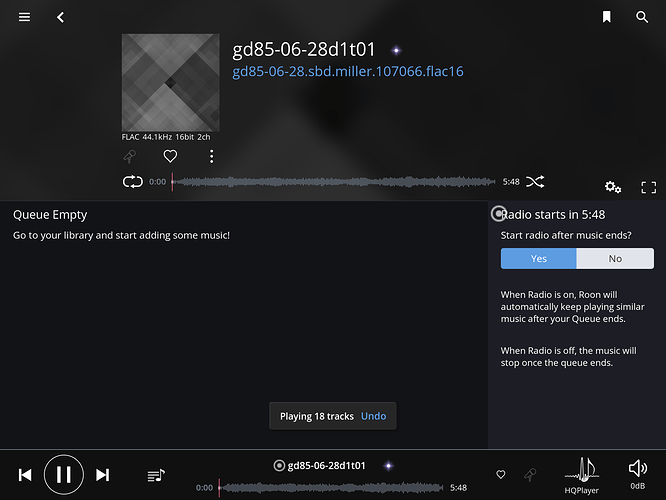 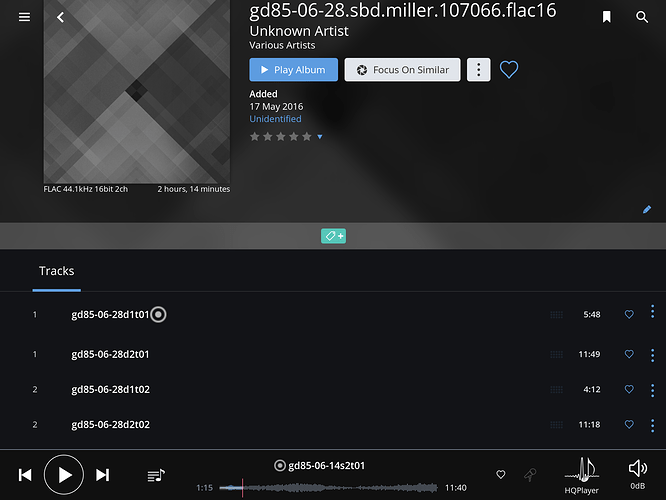 I too have a cargo ship load of Dead concerts, all in Roon and working fine. I chose to name the flac files like suggested in this Post.

Basically I’ve gone with folder has the name of the show with date, then songs inside the folder are prefixed with disk-track number or if bootlegs just track number - e.g. 01-01 Peggy-O (disk-track) or 01 Peggy-O (just track). I loaded all tracks for all discs into the same folder.

What I have found though is that you might still need to do some metadata tag editing. Some can be done via Roon (band, date, live, etc), but track meta data needs to be done via a separate tool like Metadatics (which is very good). I’ve found many an issue with the Dead concert releases where individual track meta data is not consistent and Room ended up splitting tracks into multiple Roon Albums. So you really need to check all that when ingesting an album.

I’ve found often that the concert CD release will often have its play date the date it was released and not when they boys actually stood on stage. If you’re like me you want Roon to sort it by when they played and not when Dick or Dave released it. Here Roon meta data editing can fix that.

Excellent information. I have now used metadatics to add track numbers to a concert and that solved the track order issue. The next question is… Do I need to do this to every show, folder by folder, or can the program do any number of selected folders at once. Folder by folder will take forever on 3TB of shows. Thanks again for your help.

I haven’t tried but it seems Metadatics can load files from different directories all into the same session. I don’t know how useful that would be. Personally I think it would confuse the heck out of me.

I found that most of the dead concert CDs listed (Dicks Picks, Daves Picks, Europe 72, 1977, etc) were pretty good and Roon sorted them without a problem. But when I found that Roon split a show, I’d go into metadatics to find that there was inconsistencies across the tracks related to the album. Easy fix with Metadatatics and roon was off on running.

Thanks again for your help. The fastest way I have found is to load a bunch of bootlegs at once into metadatics, select them in groups (by show) and have them tagged by track number. I have about 3TB of untagged bootlegs so it’ll take a while unfortunately, but, being the dork deadhead I am, its gotta get done. My official release albums by Dick and Dave are for the most part ok… It’s the bootlegs that are getting me. I really appreciate your help.

Some useful progams to help out may be:

For example, One could use Bulk File Rename to set your file names so that MP3tag’s extract meta-data from filename batch process would work.

FWIW, I discovered a setting in metadatics that causes the numbering sequence to restart with a new folder. Thus, I was able to drag every single dead bootleg folder I have into metadatics at once, click the track number tag button, and instantly every single show had its songs tagged with the correct track number. Amazing and problem solved. Thanks to everyone for their help.

Thanks for that. I’ll have to check it out.