Confusing: where do all this entries come from?

Hi, I’m still testing roon as I see a great opportunity in it, to consolidate and orchestrate the multiple sources and devices we have in our home.
I have to confess, Roon still confuses me. Here is my issue:

I have a fresh install of roon. the only streaming services included is Qobuz. qobuz has no artists, no album and no tracks in its favorites. When I look into roon under library, I see >800 artists, >1350 albums and >1600 tracks.

Where does all this entries come from?

Did you import something like an iTunes library? No local music (mp3, flac?)

Jörg, and where did you install Roon onto? Maybe there are local files - iTunes library, music files in the OS default ‘Music’ directory…

Roon favourite ≢ Qobuz favourite; favouriting albums and/ or tracks within Roon only

Really? I thought when you favorite in Roon it favorites in Qobuz and/or Tidal?

No, when you Add in Roon it Adds to Qobuz or TIDAL. You can’t favourite a Qobuz album or track in Roon unless it is first added to your library … so you first press + Add To Library.

I guess, I found the root cause. Roon also syncs the auto generated content from Qobuz, like ‘New releases’, etc to roon. Based on this result, Roon builds its library of artist, albums, tracks.

To get only my personal favorites listed, I have to filter albums, tracks by Roon favorites.

I’m wondering, if Roon favorites ≢ Qobuz favorites, how can I filter albums and tracks in my Roon library by the ones marked in Qobuz as favorites?

Qobuz favourites are added to your Roon library. That is, Qobuz favourite is equivalent to Add to Roon. And if you add a Qobuz album to your library from within Roon it will become a Qobuz favourites. Favouriting and album or track in Roon has no affect on Qobuz.

Also, new releases aren’t added to your library. Only items you explicitly add are included.

If you go to Albums use Focus to identify those albums from Qobuz or on your local file system.

That’s not what I observe. I have Qobuz without any favorites. However, after adding Qobuz to Roon, I get a full library. So Roon goes beyond looking after Qobuz favorites, and adds the autogenerated and curated content from Qobuz to the library as well.

If you sign up with Tidal, Roon optionally loads some collections (which you can then remove if you want), but Qobuz does not do this.

Content comes from two places - streaming service or local content. So doing one at a time, remove any folders and then separately turn off Qoboz. See which one causes the content to go away and there is a clue. Post back what you find!

I’m wondering, if Roon favorites ≢ Qobuz favorites, how can I filter albums and tracks in my Roon library by the ones marked in Qobuz as favorites?

I understand your problem. Once all these Qobuz ‘collections’ are added to your Roon library, there isn’t any easy way to automatically distinguish Qobuz albums added because they were your Qobuz favorites versus Qobuz albums added automatically. At one time there were tags that identified ‘Tidal collections’. But those were removed as a feature. So that won’t help you now.
Are you still able to differentiate your favorites in Qobuz, or have all the collection albums added to Roon also polluted your true Qobuz favorites?
How many favorites are you talking about? A few, dozens, or hundreds?

If as you say you haven’t any Qobuz favourites, then go to The Album browser in Roon as suggested and use the Focus tool to identify only Qobuz albums.

Please share a screenshot. If you didn’t as these or don’t want them in your library they can be removed.

first picture shows a fresh install of Roon, without signed in to any streaming services nor do I have any local libraries added.
–> Roon is empty

Second picture shows Qobuz as it is, with no favorites
–> blank source for roon, no favorites in the source at all.

Third pictures is after connecting Roon with Qobuz.
–> Roon shows no favorites in ‘My Qobuz’ as expected

The fourth one shows the Roon library for albums after connecting to Roon
–> it shows >1.000 albums.

Next one shows roon with a filter on favorites for the Roon album view
–> no albums presented which makes sense as I have non in favorites (not for Qobuz, nor for Roon)

So even having no favorites in Qobuz and Roon, I have a huge lists of albums in the Roon library.
–> That’s why I was wondering where all the entries come from

I have not better explanation vs the one I made in my earlier post: the entries are coming from the autogenerated playlists from Qobuz. I haven’t found something in the documentation from room to proof my theses (FYI @RoonFAQ ) 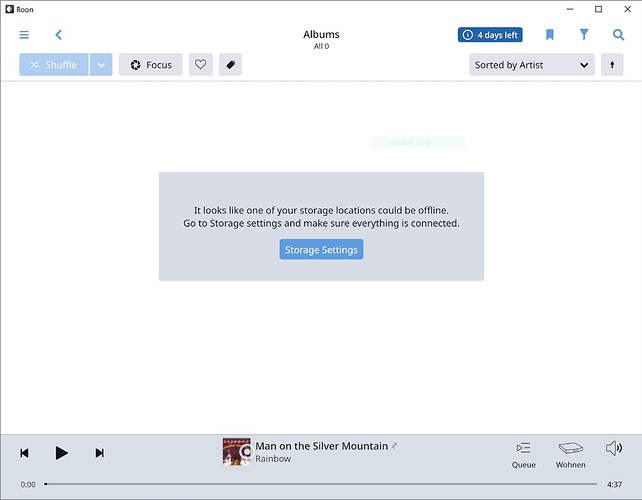 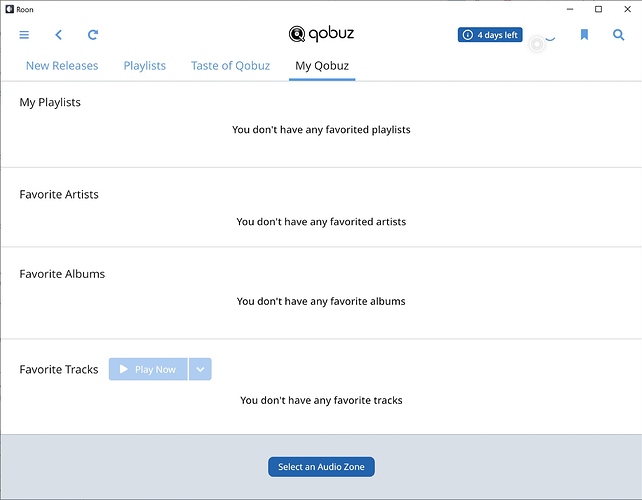 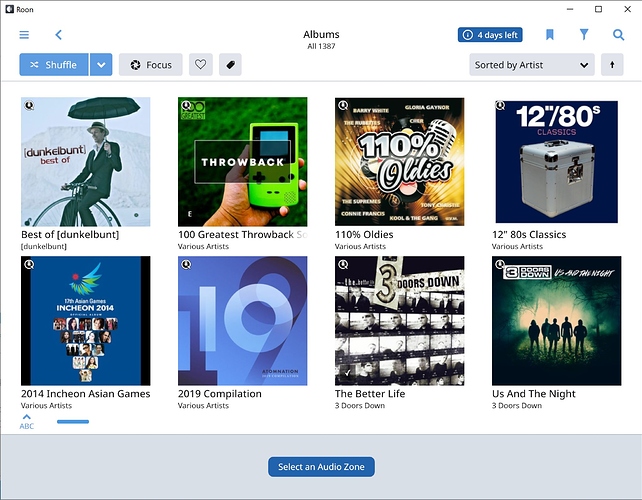 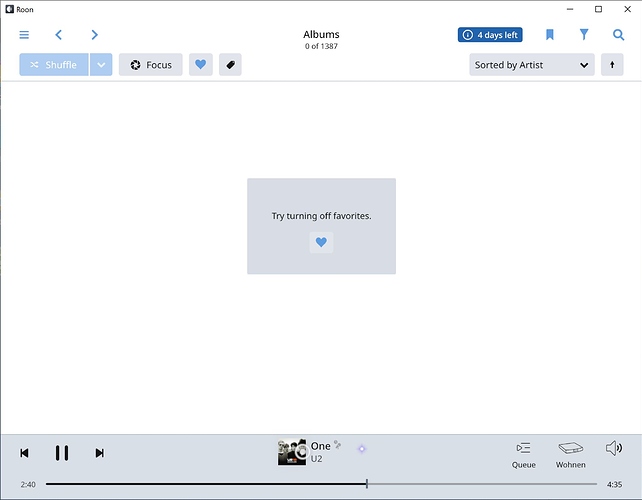 @Martin_Webster, not sure where to focus in albums on a source like qobuz?! 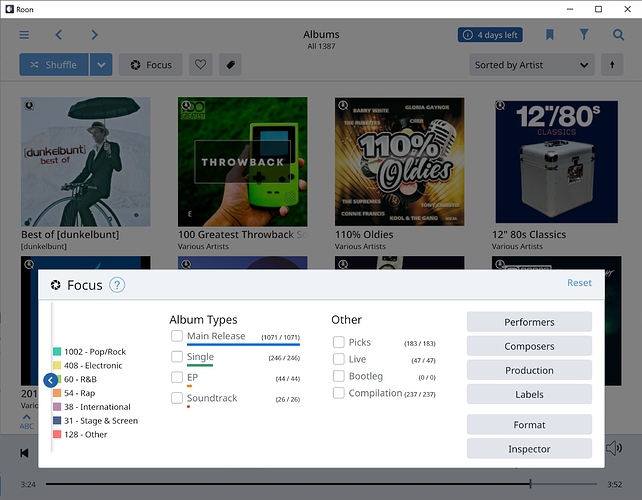 @grossmsj, didn’t find a way to differentiate. All content in Roon is coming from Qobuz

When Roon favorites ≢ Qobuz favorites are not the same, how can I find the album in my Roon album library which I marked as favorite in Qobuz?

See screenshot attached. 3 albums from ‘The knife’ in the Roon library, only one is a favorite in Qobuz. Which one is it? 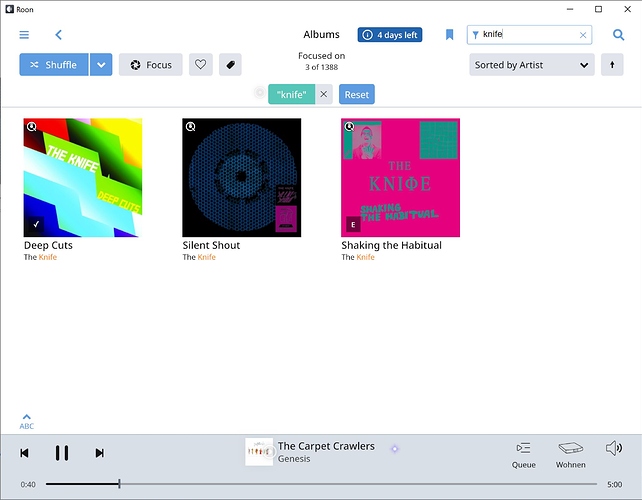 As I said earlier, only Qobuz favourites are added to your Roon Library.

All three albums are in Roon because they are favourites in Qobuz. Share a screenshot of the Qobuz app for that artist.

When Roon favorites ≢ Qobuz favorites are not the same, how can I find the album in my Roon album library which I marked as favorite in Qobuz?

You can’t differentiate. ‘Hearting’ in Qobuz adds to your Roon library, but does not make it a favorite in Roon. When all the other albums were added to your Roon library, there is no longer a way to tell which was a favorite.
When you ‘heart’ an album in Roon it can be differentiated by clicking on the heart icon on the Album view. At this point, you would have two choices:

There is no Qobuz collections Scott why do your think there is?

Well, when I joined Tidal it gave me the choice to add a whole bunch of Genres. It then populated my nascent Roon library with a ton of music. It was a good way to start.
I started Qobuz later, and it seemed like a lot of their music was added too. So I assumed the mechanism was similar (you know the saying about assume…). Qobuz does have things like “ideal discography”, etc.
At one time one could find a Tidal:Genre tag to locate those things added via Tidal. That disappeared at some point. I believe with v1.6.
So, that is my belief. But I do not know the exact mechanism of how @Breisgauer had a lot of other albums added beyond his favorites in Qobuz.
Qobuz and Roon may know how that works, but I don’t.