Through Roon I just learned one of the secrets to the great Joe Lovano’s mastery of the tenor saxophone: apparently he was the arranger on Sonny Clark’s 1958 release Cool Struttin’. This would of course mean that Mr. Lovano was arranging when he was six years old. I can not thank Roon enough for providing me with this illuminating detail into Joe Lovano’s early years.

I like Roon and am glad it exists for my use. That said, perhaps the Roonettes should consider posting a warning that any credit listings could be wildly wrong and even absurd. In audio engineering there is a concept of the signal to noise ratio. Ideally the desired signal(music, in our case) should be able to drown out the noise. On the internet, I am often struck by the noise to signal ratio which describes the reality that objective facts can sometimes be difficult to extract from the noise of conflicting idiots shouting at one another.

Perhaps the Roonettes could reconsider allowing individuals access to their own credit databases in the hope of perhaps allowing some of us to reduce the noise to signal ratio in our own lives. I am aware that this will most likely only happen when another group of people create a better product than Roon.

I wait for that day. Or for the day when a solution to this issue is offered within Roon.

Perhaps you should reserve your ire for the metadata providers

I listen avidly to all the recordings featuring Ludwig van Beethoven as an artist . The man plays a mean piano

Considering the scope of music covered by Roon and the sheer quantity of metadata , surely it’s not too much to ask a bit of “interpretation” of the data on the very rare occasions it is clearly off

The credits data comes from Allmusic. It’s free to join and once you are a member you can submit corrections to the metadata. Having said that, I just looked at Cool Struttin’ in AllMusic and I couldn’t find a reference to Joe Lovano anywhere. So, I don’t know where that came from.

Fixed it for you.

The credits data comes from Allmusic

The credits data come from multiple metadata sources, including TiVo (who supply allmusic with their “US” metadata package – we get TiVo metadata covering EU and UK specific releases in addition to the US data), MusicBrainz (this Joe Lovano error is clearly coming at least from there), and the streaming services.

That’s because this particular credit comes from Musicbrainz which roon also uses. But Musicbrainz suffers from the same errors that any wiki does - people can add any kind of nonsense they want. This particular Musicbrainz entry which roon picks up also says the album is performed by the Sonny Clark Trio - which will be a surprise to the other performers because it was a quintet recording.

Perhaps you should reserve your ire for the metadata providers

I pay Roon Labs directly for my yearly subscription to Roon. I don’t directly pay the metadata providers which Roon uses to gather metadata, which is then passed along to Roon’s subscribers. So as a Roon subscriber all I see is the incorrect metadata presented to me by Roon.

The OP is only asking for a way for the individual to edit the credits metadata that they know to be incorrect. At the moment editing metadata within Roon is allowed but is a very tedious process. So perhaps the request should be for a fast and easy way to edit metadata.

Fully fleshed out and correct metadata is the life blood of a robust Roon experience. Without the hyperlinking that Roon provides within the metadata Roon becomes a lifeless listening experience. Here are two examples, one showing incomplete metadata and the other showing much more complete metadata. In both cases the albums have been identified by Roon and the metadata “filled” in by Roon. You decide. 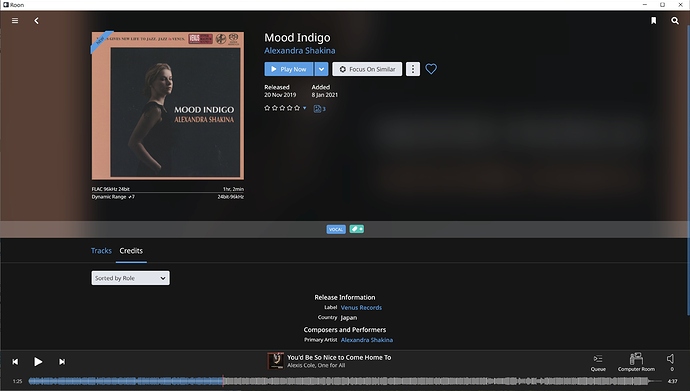 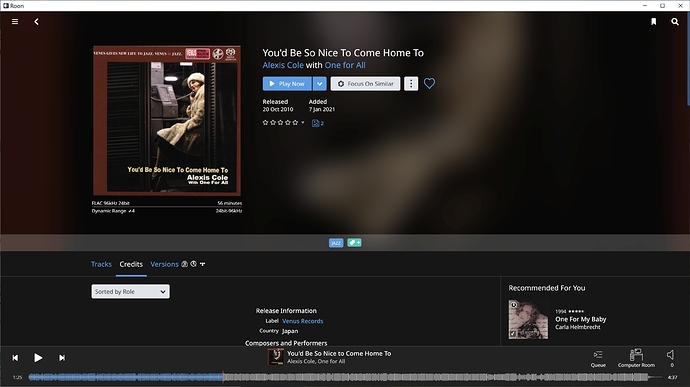 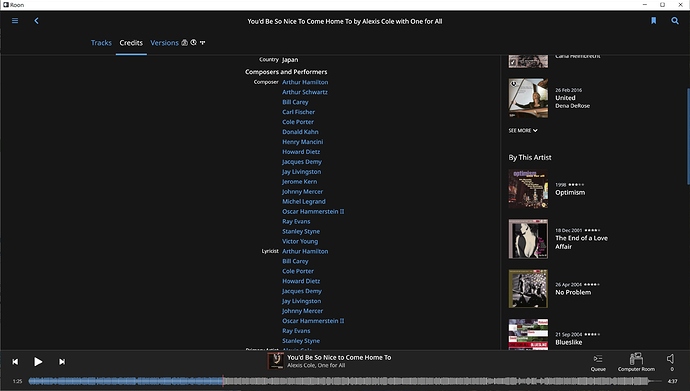 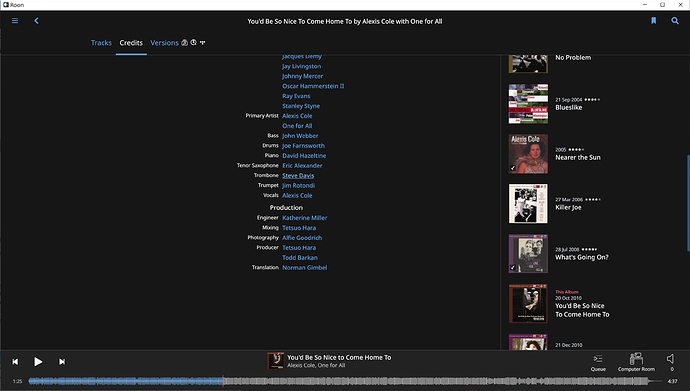 There are two ways to make a request to update metadata to the servicers via the Roon forum. We’ve all done it. One memorable request for correction was one was from the Elton John album, Caribou. The song should have been: The Bitch is Back. An extra letter L was inserted in the second position of the last word. True story. Roon star forwarded the correction which was fixed promptly after the report.

The OP request was not the way I would have approached it. Just sayin’

PS: I do love sarcasm where appropriate.

Loved the opening post (no sarcasm on my end this time).

Since Roon has this certain… eh, way, for lack of a better word of going all out on hyperbole in their marketing blurb, Roon should expect the occasional acerbic comment.

Though the current marketing blurb is less offensive than the previous version (the obvious untruth “Roon knows your music” has been removed) they still claim “a spectacular search” which is not untrue for a given value of spectacular. It’s spectacularly something alright.

If a company advertises features and then blames a third party for the failure to deliver said features it stands to reason that consumers will feel unsatisfied. Them’s the breaks as they say on the other side of the Atlantic.

BTW it’s not the payng customer who should fix the error.

This stuff is a no big thing for me. Cheers…

If a company advertises features and then blames a third party for the failure to deliver said features it stands to reason that consumers will feel unsatisfied. Them’s the breaks as they say on the other side of the Atlantic.

BTW it’s not the payng customer who should fix the error.

The thing is most of my local music library albums (as opposed to the music I stream from Tidal and Qobuz) have a simple text file (info.txt) included in the file folder along with the music and image/PDF files. I’ve submitted feature requests in the past asking for the ability to view *.txt in a similar manner to how one can view PDFs and image files only to be given a lot of nonsense about all the useless txt files that users have in their folders blah blah blah. The ability to view the info text files would at least allow me see some credits but alas would not provide those very useful hyperlinks.

And please don’t tell me to run a batch file to convert all the info.txt files into info.pdf files because the size of my music library would make that conversion into a massive, time consuming task.

The reason people get fired up at Roon (as opposed to the metadata provider) is that the capability for the users that care about this - and there must be a few as this topic comes up here over and over - to fix it is so limited/broken/absent.

The Roon philosophy of shielding the users from themselves unfortunately doesn’t align well with the stone cold fact that the quality of the metadata that some portion of their value prop is based on completely sucks for anybody that cares about it.

I say this by the way as a lifetime subscriber that just bought a nucleus plus… I like Roon but there’s a few things about it that drive me nuts. You might guess this is on the list.

If they could map every field they display to a file tag that is read in on import, that would fix a lot of the grievances I think. They do that with some, but not all metadata. Provide complete coverage, publish it in the knowledge base. It doesn’t have to be a “feature”, just make it work for those of us that care about it.

I don’t disagree with any of the things said above. But when you consider the volume of metadata involved in a typical Roon library and the current state of the art in collecting, collating and managing the metadata, it’s a miracle it works at all. Many complain about the cost of Roon, but if you put Roon in charge of collecting and managing the metadata, I suspect the cost goes up exponentially. In other words, you get what you pay for. Are we getting what we pay for? Some say yes, some say maybe not.

I get your point and I agree with it.

What rubs me the wrong way isn’t that something doesn’t quite work right. It’s the absolute lack of humilty and the tendency to a) blame others and b) keep insisting that the product works as advertised contrary to real life performance.