Connecting to Denon DLNA not Airplay

I discussed your case with our developers today and they’re wondering if something environmental could be causing issues with our discovery protocol.

They felt strongly that the first thing to try before we troubleshoot further is to see whether things work with a different router, preferably something very vanilla – a consumer router running stock settings and not managed by an ISP. Ideally, the Chromecast and Core would also connect directly to the router, even over WiFi just to ensure there less variables in the equation.

If that works, at least we know something about your current environment is causing the issue and we can troubleshoot in the right direction. Do you think you could run that test, verify how the setup works with a different router (even temporarily) and let me know your findings?

Thank you @noris - This is not an easy thing for me to do, as I don’t think I have a router that is not an ISP (Verizon) one.

Am I to understand that the team thinks I should NOT have dropouts with the ChromeCast audio using ethernet? Some here seem to think the CCA has a firmware bug, though I guess it seems focused on 96 kHz streams.

Anyway, not really sure what kind of modem I would need or where to get it. I am leaning toward finding a different Roon certified solution if one can be not too expensive.

We have often seen ISP provided Routers and Modems cause issues, enough times that getting a more typical router is recommended when troubleshooting dropouts. I am not asking you to go out and by a new modem as that is a different device than a router.

You would still be able to keep your ISP provided Modem but I suggest placing it into “Bridge mode” and then purchase a typical consumer router, the Netgear Nighthawk series have had the fewest issues as reported by other Roon users.

The Ethernet adapter for your Chromecast will help but if the Router is the device causing issues here, it would be good to confirm how your system behaves with a non-ISP provided Router just to eliminate that as a possible point of failure. Please let me know if this is possible.

So @support I continue to try things but I am not willing to go buy a new wireless router and try that. I honestly think it is the Google hardware or whatever bug that someone mentioned on here when I first bought the thing.

Here is what I did now: I moved my Roon Core to my iMac (it is a 2013 model with 16 gb memory, it is not doing much, should be plenty fast). The music is connected from a RAID via Thunderbolt. The machine is connected by 1000 Ethernet to an 8 port Ethernet switch which is then connected to the Ethernet adapter for Chromecast audio, then to Chromecast Audio. I am attaching an image of the model lab for the Ethernet switch. Now this switch is then ethernet connected to my ISP Wireless hot spot/router, but it should only need to access that for internet, it is not in the path of the music.

Anyway the streaming at 24 bit is still dropping out now and then, not as often. Listening to Paul McCartney RAM in 24 bit 96 kHz ALAC on Roon core ro Chromecast. Will go minutes with no issue, then have a few dropouts. NOTE: I do love Roon and would be willing to by a much better DAC to make this actually work. Would ideally like to stream from my laptop as well and not just hard wired. Ron - Hope the photo attached 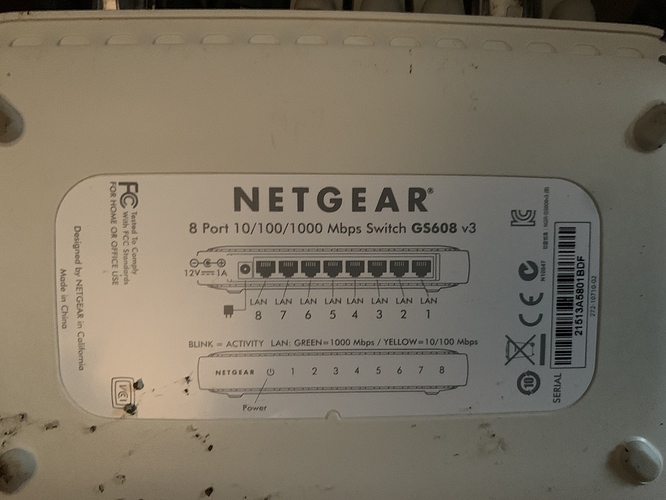 Thanks for sharing that image. The switch is unmanaged so it does not seem to be the issue here. We have a few options moving forward:
#1: We wait for Google to investigate the Chromecast dropouts issue (no timeline provided by Google)
#2: You try to replace the Router with a non-ISP provided one in hopes of resolving the dropouts (no guarantees)
#3: You replace the Chromecast Audio with another Roon Ready Endpoint (Partners listed at that link) or connect another endpoint to the Denon, truth be told you might want to invest in a ROCK setup and have it connected directly to the Denon via HDMI or USB and use it to manage your library as well.

I would personally go with #3 as it seems like the most sensible option in my opinion but the decision is yours.

Thank you for the suggestions. The link to the Roon Nucleus purchase is dead, do they no longer offer that?

I am trying Tidal and it seems to work fine without dropouts, but I don’t think I can afford Tidal and Roon. So far I don’t seem to be able to use Tidal and stream to Chromecast Audio without Roon…

So I went ahead and bought a BluSound Node 2i which for some reason the Roon software says is Not Certified but which seems to be working flawlessly so far. I liked the idea of a Rock but was scared away by having to build it (it seems Roon sold them at one time but no longer?) Anyway, I am still not sure what advantage Rock would have, and since I dropped $500 on the BluSound I will stick with it. I still don’t love paying for Roon and for Tidal maybe eventually, but my first glance at BluOS suggests it won’t be nearly as nice as Roon. Anyway I bought a year of Roon now and we shall see what I think in 10 months!

I am still curious about the Rock vs others. The BluSound does sound better to me, I think maybe it is the DAC as well as the fact that I can do MQA rendering for Tidal and the full 192 on some files at 24 bit.

Anyway - Thanks and I am getting better at this slowly. Anyone want a Chromecast audio and an ethrnet adapter? )

Roon don’t sell the Nucleus directly it’s only available through dealers. The Nucleus is also more than an endpoint it’s a headless plug and play Roon server and endpoint in one optimised to run Roon as best in class. It does not use ROCK but a variant of it as it has some extra features exclusive for Nucleus only such has home automation integration. Bluesound cannot run Roon server only act as an endpoint so that’s the only thing they have in common