After setup of the RPi and display was completed, there is an Error message which states that a Connection Failure occurred. The RPI is enabled in Roon Settings/Audio. The name I assigned the device in Roon is D30Pro. This same name is assigned on the online Ropieeexl page for the RPi under Display - Roon Control Zone.

The album art and music controls are not accessible on the display screen. The clock is present on the display after a 10 minutes delay upon rebooting.

I can play music through the RPi running Ropieeexl using the Roon app on my iPhone.

I moved your post to the appropriate forum section - good luck!

Thanks. I don’t know how you were able to assign the tag Ropieee. I didn’t see that option. Could you please explain?

Did you activate the extension under roon settings extensions…the names must be identical…read the how to on ropieee.org

If you go to category “Audio Gear Talk” and then scroll down, there’s it…

Thanks for your question.

I’ve checked the Extentions section in Roon each time I’ve rebooted the RPi. The message I get is “No Extensions Discovered.”

Let’s see what Harry gets from the feedback @spockfish

Any screens shots of the display tab? 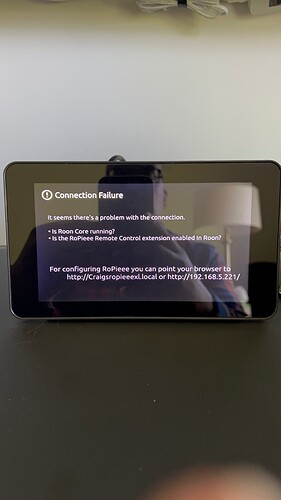 No the web page for ropieee

Are you using the old build or the new NG version?

I am using the latest version of the software.

That is certainly not the latest version.
Could you download a fresh image and try again?

I followed your advice. Initially, I did see the album art on the display. During the following configuration and reboot, I received the Connection Failure massage again.

This is the version I’m using:

Ok. Now we can look further.

So, most importantly: have you enabled the extension in Roon?

The message in the Extensions section states,”No Extensions Discovered.”

I’ve tried to do that without success. The Extension section is empty.