This is a strange one, but I think its due to network issues as it never happened before I installed ROCK?

Scenario 1: I used to run Core/Control/Output all on my MacBook so when listening to my Mojo and headphones attached in the bedroom (5GHz wifi, with the Airport Extreme being situated in the living room) there was never an issue, no dropouts, no skips, all good.

Scenario 2: I now have ROCK on the NUC as described above and so therefore my MacBook is Control/Output when I listen in the bedroom to my Mojo through headphones. Now I find, usually only when I first begin to listen actually, Roon will stop playing a little way into a track and when I check (I’m probably surfing or something at the same time) the output device has been lost for a second or two before it comes back. I have even got it to do this by bringing up the Now Playing screen and watching as a blank top half is displayed and Roon seems to be struggling getting the artist image, only to lose connection again. In a few seconds the image arrives and connection is regained - although I do have to press play to resume listening. If there is an error message (there isn’t always) it is ‘Connection Lost’.

I thought this might be down to me using the MacBook for surfing etc whilst it is also trying to be the endpoint, so I have tried two remedies. Firstly I have been using my iPhone as an endpoint, the MacBook as a control but still this happens, again usually when I first begin listening. Then I utilised an old Airport Express to (wirelessly) extend the 5GHz network into the bedroom. According to NetSpot I now have a great connection (I have to turn off wifi on the iPhone and turn it on again after the Express is booted so it actually connects to that extender device) but still when I first start listening, usually about a few minutes in maybe, the connection is lost. Sometimes a couple of times, but then everything appears stable for the rest of the listening session? NetSpot doesn’t report any issues, no drops in signal or anything over time.

It seems like a network issue, so I’ve attached a NetSpot screenshot below - my wifi is Tims 2.4Ghz and Tims 5Ghz - I have a separate 5Ghz so I can explicitly connect to it. There are two Tims 5GHz as one I presume is the Airport Express extender. Its no big issue, but I would appreciate a likely diagnosis so I can see what might be changed. Obviously the Roon Core is sending tons of data over the network now whereas before everything was on the MacBook and only wifi connection was out to the internet .

Thanks for all your help!

PS. There is no issue playing in the living room ROCK -> Raspberry Pi 4 Ropieee using whatever control point comes to hand. 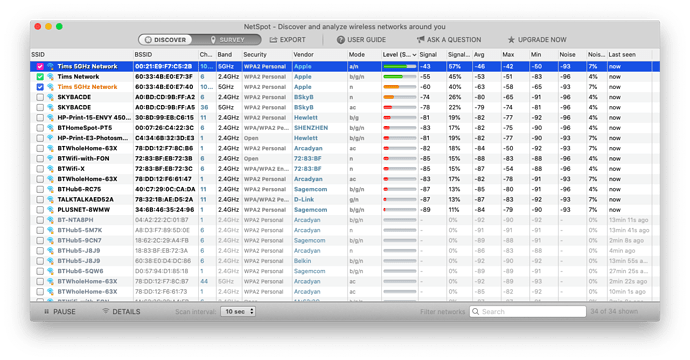 I would bet the above are the cause of the issue. Roon has long warned against using them as they have caused issues.

Here is the relevant text:

From the Roon Networking FAQ: https://kb.roonlabs.com/Networking_Best_Practices

As @Rugby mentioned, we have often seen issues surrounding Apple routers, and we generally advise staying away from them. If you try connecting your Macbook to the same router as the ROCK Core, does the same issue occur? I would try playing to “System Output” to verify if there are any issues as the first step, and then only after add complexity in.

Hi @noris - well that seems pretty clear, I also see my Extreme is a fourth generation ‘n’ model from 2009 so I’m sure things have advanced since then. Its not a big issue as I am listening now, both MacBook and now iPhone (to test) with both connected to the Express extender and not a skip or problem at all - I think its just when ROCK first starts playing it must be doing a lot of work behind the scenes (I do have a convolution filter installed for my headphones as well) after that first hiccup or two all is fine - and this morning (obviously because I reported the issue!

) no skips all connection loss at all!

I don’t need to check if there is an issue connected directly to the basestation that is connected to the core as in that room there isn’t any wifi issues at all. Apple of course have stopped making the Airport hardware but I’m not necessarily thinking of changing as it works pretty much - it was bloody expensive when it came out I remember. I also have a perfectly serviceable BT Home Hub that just came with the latest Infinity changes (so no switch box now, hub goes straight into the wall) but the socket is under a cabinet as far away from the bedroom as it can be so the hub has to live there! I did try it (not for Roon) as a wifi basestation but had signal issues in other rooms.

Thanks for the additional info!

Yes, this model does seem quite out of date and might be the source of the issues you were experiencing with Roon.

I also have a perfectly serviceable BT Home Hub that just came with the latest Infinity changes (so no switch box now, hub goes straight into the wall)

This is also a not a great device to use. We have often seen issues surrounding ISP-provided equipment when in router mode, as mentioned in our Networking Best Practices linked above.

If you are looking for a new router that can also contain extenders, I would suggest taking a look at mesh-style equipment, such as Eero/Orbi/Velop. I have not used these personally, but there have been reports of good performance on Roon on such equipment.

In either case, I think you have some next steps if the issue re-occurs again.