I also seem to be experiencing a similar issue. I installed the Nucleus about 5 days ago. Music suddenly stops and core claims it’s “Initializing”. When I look at the Roon OS setup page, uptimes haven’t been reset (so presumably nothing restarted).

It was starting to happen really frequently – couldn’t even get through an album. I just tried resetting the Nucleus and it appears to be working for now.

I moved your post to it’s own thread so I can better assist you here. May I ask that you please describe your network configuration/topology, including any networking hardware currently in use, so we can have a clear understanding of how your devices are communicating.

I’d like to enable some diagnostics on your account so our technical staff can get some more insight into what’s going on here.

The next time this behavior occurs note the time and respond here with that time, and I’ll make sure we review the diagnostics related to that timestamp.

A post was split to a new topic: iOS remote losing connection to Core

The Nucleus and Trinnov Amethyst (Roon endpoint) are connected to a Netgear 8 port unmanaged switch. The switch is connected to an Airport Extreme router, which laptops and mobile devices connect to wirelessly.

I only have the one endpoint. I also recently switched from a Mac Mini to a Nucleus for running the Roon core, and this problem didn’t exist on the Mac Mini.

Yes, the behavior occurred again after rebooting the Nucleus. Restarting just Roon Server on the Nucleus seemed to fix it again temporarily.

@dylan Something happened on Thursday 9/6 between 9 and 11 am. I don’t have a more precise time for it because it happened to my fiance. In this case when I came home, the core was stuck in a slightly different state. I was able to browse music but trying to play a song didn’t work. The UI just continued to display the song it got stuck on.

This happened again this morning. Timestamp would be approximately Sept 9 at 11:05 AM PST.

Thanks for the updates here, @MattT!

I’m enabling diagnostics on your account once more and will pass the report along to the technical team. As soon as the team completes their analysis and provides their feedback I’ll be sure to update you ASAP.

Note that there are 2 different symptoms I am observing here:

Another thing to note is that I wasn’t having any issues until I switched to the Nucleus a couple of weeks ago. I was running the core on a mac mini before. 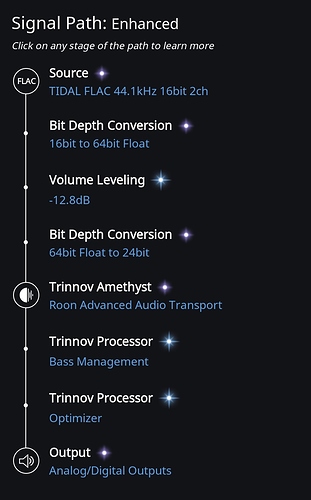 I’m passing this along to the team along with the latest diagnostics report. I’ll be sure to update you ASAP when the team has completed their analysis and provided their feedback.

Just to clarify a couple things:

During this time music also stops playing, right? Are you able to access the Web UI during this time? Or is it just that the remote loses connection but the Core seems to be running (playing music, still accessible over the network / web UI)?

If you disable all DSP do you still experience this behavior?

Yes, in all cases music stops playing. In one case I’m still able to browse, in the other case I’m not.

I don’t think I have any DSP enabled in Roon. Does volume leveling count?

Thanks for getting touch @MattT, appreciated! @dylan is out of office today so I am keeping an eye out on things for him.

I noticed Dylan had asked that when the remote gets into this state (i.e “core lost, initializing”) are you able to access the Nucleus’ webUI. May I very kindly ask you to verify so I can add this piece of information to your ticket for the team?

FWIW I also just had an issue this morning around 10 am where the music just stopped randomly. This time nothing seemed to be “stuck”, though. If I opened a remote and pressed play things resumed as normal.

I just wanted to confirm that all of the information provided has been passed along to the team and they’re continuing their investigation into the diagnostics report. I’ll be sure to update you ASAP when they’ve completed their analysis.

I have been experience more issues this evening. The music just randomly halts playing. When I click play again the music resumes fine… One occurence was just 10 minutes ago or so (September 17 12:30 AM PST).

I had a chat with the team today about their findings and I wanted to give you an update. The team has identified an issue affecting a small number of Roon OS users that is currently under investigation, and that appears to be the issue seen here.

We have a ticket open with the development team to resolve this issue. We hope to have something available in the near future. I’ll be sure to keep you up to date as any news becomes available.

We just released Roon 1.5 (Build 354) which includes Nucleus stability improvements. We fixed a memory issue we believe was a factor in this report. Things should be much more stable with the latest release, but let me know if you have any more issues.

This still seems to be a problem. My core has been stuck initializing for quite awhile now.

It happened about 30 minutes ago. 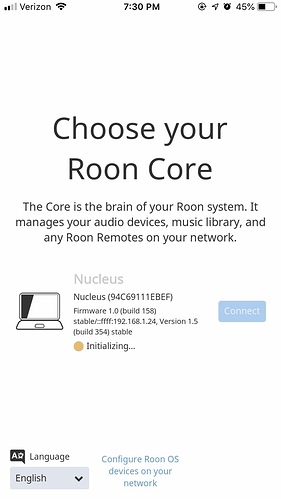 Sorry to hear that you’ve experienced this issue again!

So we can take a closer look, please confirm the following:

I actually didn’t have music playing when it occurred. At the moment it happened I was adjusting the volume before starting a song.

I didn’t try from a Mac, but I did attempt closing or killing the Roon app on my phone multiple times to no avail. Core still initializing.

How many apps do you have open on your iPhone remote?