Running Roon Server on a headless Mac Mini pointing to a Synology NAS where my music files reside. My NAS server automatically shuts down (all the way down) every night and wakes up (read boots up) in the afternoon.

Roon Server can’t find the directories after the NAS shuts down. I believe it isn’t a case of can’t finding it, but that it isn’t looking for it. If I Quit the Roon Server and immediately restart it quickly finds the music files and all end points are immediately refreshed.

Hey @rayski – we’re working on some changes for our upcoming 1.2 release that should make real-time folder watching on NAS drives like Synology a lot more robust and dependable, and I think the changes should help in your situation as well.

I don’t have a firm time frame quite yet for the release, but the work is happening now, so stand by and thanks in advance for your patience!

Can you elaborate on the improvements to real-time folder-watching? I have a mac mini pointing to a Synology NAS as well. Build 99 seems to drop the connection to it even when it doesn’t shut down. I haven’t had the chance to troubleshoot it, life is just too busy.

Mike can you elaborate on the root cause to the issue? Is it along the lines of the NAS being offline for a prolonged time and ROON stops checking (mine if offline 12 hrs on week days); or is it some system event Roon is listening on that it isn’t seeing when the NAS comes back online? If the latter maybe there is something I can do either on the NAS or the Mini to help alleviate the problem somewhat if I knew what that event is.

Mike can you elaborate on the root cause to the issue? Is it along the lines of the NAS being offline for a prolonged time and ROON stops checking (mine if offline 12 hrs on week days); or is it some system event Roon is listening on that it isn’t seeing when the NAS comes back online?

Reading your description of the issue, it actually seems like this could be unrelated to the real-time watching issues we’re aware of, which are caused by how most NAS manufacturers appear to implement filesystem notifications.

Can you let me know a little bit more about how your NAS is set up in Roon? What’s the path you’re using to mount it? Are you using SMB3?

Mike here is my configuration:

The NAS is using SMB2 for File Sharing. I tried SMB3 last week when debugging the split album issue, found it had no effect so switched back to SMB2.

The NAS and MacMini are both directly plugged into a router using GigaBit ethernet ports. All other Macs are wireless.

The MacMini (headless) is running the latest version of Roon Server.

Following is picture from Roon on a laptop with the storage settings: 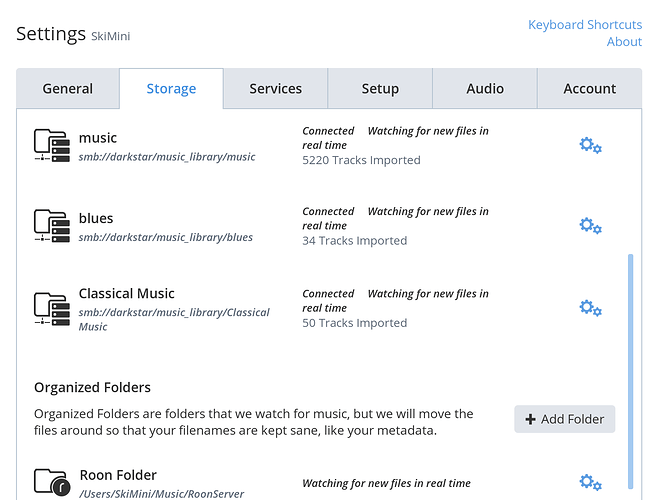 There are no ‘Organized Folders’. Just the 3 watched folders shown in the screen shot.

Please let me know if there are any other settings you’d like to know.

Hey @rayski – we’ve opened up a work item here to try and improve this behavior for our next release.

There’s some more testing to do but we’re hoping we can do better here, as it looks like the current implementation is timing out when we haven’t seen the NAS in a while. We’ll let you know how it’s going ahead of our 1.2 release.

Thanks for following up. When the fix is available I’ll be more than happy to test it out for you and provide feedback.

Since I’ve upgraded to the 1.2 release I am no longer seeing this problem. My NAS automatically shuts down during the day when I’m not home and wakes when I’m home. My Roon Server is now finding the NAS once it wakes again. Plus one for Roon 1.2.

Excellent news! Thanks for letting us know @rayski!