Upgraded the Core package today to QPKG-Version: 2021-10-03 following its release and now none of my clients will find the core. If I choose ‘Select a different core’ my Core server shows up but then goes through an initial sign up process which means I’m dropped into a clean fresh instance of Roon with all my music & history gone.

There was no Roon (Core) Software update today. What update do you talk about? OS update of your NAS (to QTS 5.0.0) probably? If yes, did you try and rebooted your NAS again (I know that a reboot is part of the update process already but sometimes things might just hang/take longer to settle after a firmware (OS) update).

Just saw your other post that explains your situation a little more.

I’m talking about the QPKG-Version: 2021-10-03 Core update which became available today, not a QTS OS upgrade.

Thank you for the clarification here. Maybe @crieke is able to help you out then.

I have the same issue

Looking into this a bit more, based on the release notes

I notice my update hasn’t created a "RoonOnNAS’ folder, not that I can see anyways, so I wonder if that is the issue? @crieke

Hi @Mike_Ormerod, hi @angelo_parodi,
Sorry for the trouble.
I will look into, why the migration of the database might have failed. But I am currently at my family this weekend.
Did you perform the installation as a new install or as an update?

Since this version (as @BlackJack mentioned) all database folders will be located in a “RoonOnNAS” folder. Your previous database should have been migrated to this new folder (I can’t count how many times I’ve tested this before sending it to QNAP). But this migration will only be done, when performing an update.

If you have installed the new version as an update, I will take another look, why it might not have worked as expected.

You can also solve this manually:

Thanks, I’ll try the manual approach. So should the ‘RoonOnNas’ folder be at the top level of the current RoonServer folder? For example, I have a USB SSD stick as a data volume on my QNAP which is mounted as RoonServer. So should my path be RoonServer > RoonOnNAS or should RoonServer be renamed to RoonOnNAS?

I’d did this as an upgrade, not a new install.

Also the RoonOnNAS folder didn’t get created and so doesn’t exist.

What should the new Database folder end up being?

This is how it looks when installed: - 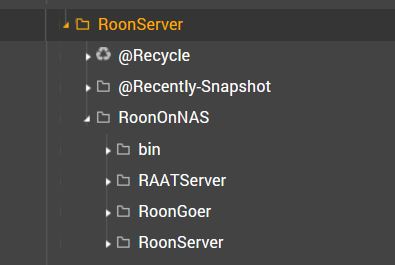 Thanks @Scotav. It basically looks like the folder creation somehow failed

Any news? No way to make it work

You can try the steps above from @crieke but I couldn’t get it to work. I eventually ended up having to do a new install and then restore from back up. Less than ideal but at least it’s working again.

I wouldn’t be able to do that, I need a new update that adjusts everything.