All endpoints use ethernet. One Roon bridge endpoint uses Wifi. The core is connected through ethernet, 1gbps network.

The Windows 10 looses connection to the core from time to time. Always during songs. When connection is restored, the ZxR isn’t detected and I need to restart Roon. This usually happens when playing High Res audio through Qobuz.
I have a 1Gbps down/50Mbps connection with my cable provider with an average speed of 850/49 Mbps.

If you’re playing music during this time does it continue to play, or does it stop too?

Do you have any other remote devices? Do they lose connection to the Core at the same time?

(edit: it does not continue to play)

Hello @Frank_Eersels, can you tell me the model number of your router? Have you tried a different Ethernet cable?

Hi @nuwriy,
My router is a cable modem provided by my ISP (Telenet). Furthermore I have two switches, one TP-Link 48-port switch and a 4-port switch. The PC having problems is connected to the 4-port switch. Network speeds appear to be normal and speedtest.net reports 850Mbps down and 49Mbps down on the PC having the Roon core dropouts.

Some observations. Friday I mostly used the HifiBerry endpoint without any issues. When I switched to my PC, it lost its connection to the Roon core in the middle of the second song of the same album I previously streamed troublefree on the HifiBerry (Idiot Prayer - Nick Cave, 24/96). I noticed an error message in Roon that Qobuz was unable to stream the song. This message isn’t always displayed when the connection to the core is lost.

Today, again on my PC, it lost its connection to the Roon core in the middle of the first song. When playing the same album in Qobuz in the same quality, no drops occur.

These are the results from Speedtest.net taken on the server:

These are the results taken on the PC: 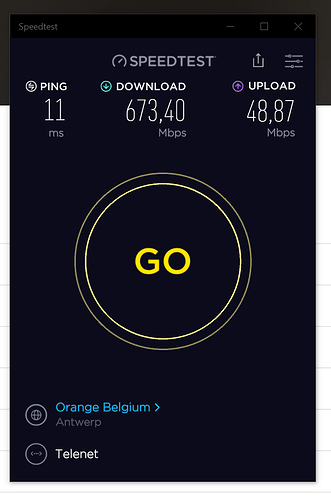 @nuwriy, @dylan : Creative published new drivers on November 6th for the Z-series soundcards. The issue seems fixed after installing these.

Thanks both for your assistance!

Hello @Frank_Eersels, and thanks for the update! Please let us know if you have any further issues.