Hi everyone. Looking for recommendations for an upgrade to my core, from an old asus i5 laptop to something with a bit more welly! What would be the recommendation for around a £grand, as a hassle free core for HQ Player (and basic internet access). Mac mini? iMac? Other NUC? Something built for speed and power, and compatible with android remotes. Thanks in advance. New to this.

Im not an HQ player expert in any form but i think the horsepower you need is related to the complexity of the transforms you want to do. So an udea if what you want to acheive and how big your roon library is in number of tracks as that is remated too.

Hey. Thanks for the response. Sorry, transforms? Would like a solid core with more than one endpoint, upstairs via wired dac and downstairs via remote and KEF LSX. Library currently has just over 1620 albums in it. No. of tracks i dont know. Does that help?

It depends which filters and resampling you are using with Hqplayer and you are in the DSD or PCM domain.
Do you need a fanless PC or something staying in the cellar?
I’m using a fanless Cirrus7 with an i9 and 32GB Ram, which is not NUC based and fast enough for many (but not all) filters in Hqplayer and also Roon until DSD512.

To be clear you want to run the Roon Core and HQPlayer in the same machine. Then you will need a box with enough oomph to handle both. What that oomph is depends greatly on what filters modulators you use in the HQPlayer side. And how big your library is on the Roon side.

And once you hand the audio from Roon to HQPlayer, it is HQPlayer endpoints you need NOT ROON endpoints as HQPlayer will then be responsible for the audio

gone for a shiny new macbook pro, top spec. in the middle of the migration, restoring from a backup but roon doesn’t seem to be able to see an external usb drive. Any help much appreciated. Let me know if I need to move to a new thread.

I don’t use HQ Player, but I suspect you would have been better off purchasing a pro gaming NUC or traditional PC with NVIDIA GPU card.

HQ Player has the ability to off load processing to GPU.
I suspect this is the optimal way to go.

restoring from a backup but roon doesn’t seem to be able to see an external usb drive.

What format is the USB drive?

Were you running Roon on Windows before the Macbook

Yes and ive just erased and reformatted to ex fat, which hopefully will resolve the visibility.

I think the Mac mini M1 with 16GB RAM and 512GB internal SSD is perfect for a Roon Server/HQPlayer Desktop setup.

I bought a refurbished Mac mini M1 in the above configuration from Apple directly for $929.

I am able to upsample all PCM and DSD to DSD256 using:

@musicjunkie917 two years ago I bought an M1 Mini with 16Gb of ram and 512GB SSD to experiment with - at the time I was still using a 2012 i7 Mini with Uptone LPS as my Roon server.
I compared using the M1 for everything - Roon Core, control and HQPlayer but my preference at the time was to retain the i7 Mini for the Core and run Roon Control (GUI) and HQPlayer on the M1.
However regardless of the config I used I could never make Roon sound as good, in terms of transparency and realism, as running HQPlayer alone (without Roon) on the M1. So I either had to sacrifice the great Roon functionality/ergonomics or the superior HQP standalone sound quality.

Last week I bought a second, basic spec, M1 to replace the 2012 i7 mini as my Roon Core. The other M1 was still used for Roon Control and HQPlayer. Both M1’s are connected to an Etherregen network switch with a Sonore UltraRendu the network endpoint to my DAC.
Wow! This combo sounds just great, with no SQ compromise compared to HQPlayer alone - maybe even better! A major surprise and big win in my system.

However regardless of the config I used I could never make Roon sound as good, in terms of transparency and realism, as running HQPlayer alone (without Roon) on the M1.

But how was your DAC connected in this? Direct USB cable from M1 to USB DAC ?

I know now you are using an ultraRendu but how about back then when you didn’t like everything running on the single M1?

@dabassgoesboomboom the only change I made was substituting the M1 Mini for the 2012 i7 Mini, both were running Roonserver and headless with only the ethernet connection.
I even re-used the same generic Cat6 UTP cable the i7 mini was using to the Etherrgen switch.

The second M1 mini running Roon GUI and HQP was left as is - as was the Etherregen switch, UltraRendu and DAC.

There was an omission as a result of the swap - the 2012 i7 Mini (16GB ram/512GB SSD) was using an Uptone JS2 LPS while the new M1 is completely stock (internal SMPS) and the lowest spec 8GB ram/256GB SSD.
From memory the i7 Mini was typically running 2-3% CPU load, so just idling really. Hard to pin down why the M1 sounds so much better? Lower electrical noise from the 5nm CPU/unified memory/faster SSD ?

It’s is curious to make a swap like this and get such an emphatic and unexpected improvement.

Interesting, so your DAC was always connected only to the ultraRendu - network isolated from all Macs.

But you heard quite a big difference in different upstream configs?

Adding a 2nd Mac does add more noise to the system (AC noise / RF) but this sounded better to you than single Mac ?

Interesting, so your DAC was always connected only to the ultraRendu - network isolated from all Macs.

But you heard quite a big difference in different upstream configs?

Adding a 2nd Mac does add more noise to the system (AC noise / RF) but this sounded better to you than single Mac ?

In any case it was surprising to hear this SQ improvement from change of server machine - which was on the other side of the noise isolating Etherregen network switch to the UltraRendu endpoint!

I didn’t add an extra Mac Mini, I was already using 2: the i7 Mini as Roonserver and M1 Mini as Roon Control GUI/HQP.

But didn’t you say you also tried running everything on a single Mac at some point ? That’s what I was referring to.

What DAC is it?

Oh, yes.
I did try running Roon Core/Control and HQP on the single M1 mini.
For some reason this compromised the SQ compared to using HQPlayer standalone (without Roon).
Using the second M1 Mini to run the Core only and running HQPlayer on the other M1 doesn’t compromise the SQ of HQP in my setup.
So in that respect 2 x M1 minis is better than one.

DAC is the Benchmark DAC3 and, FWIW, I only use HQP for PCM upscaling.
My system is listed here: http://www.tobespages.info/ 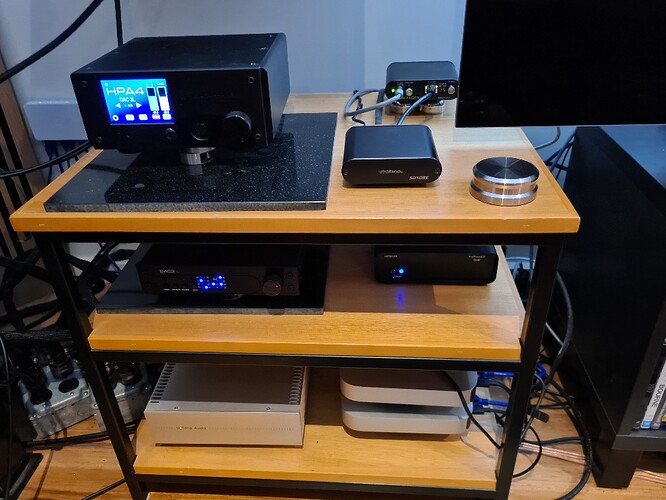 Thanks. They’re pretty revealing of upstream changes but get me close to the music in a way I really like.