Creating multiple zones on one output device - is it possible?

I’d like to utilize a professional sound card (one of the latest generation MOTUs) with Roon.

The goal is to use the sound card’s multiple outputs to create multiple playback zones with Roon.

The problem is that the sound card only exposes itself as a single output device like a multichannel sound card instead of exposing each of its stereo output pairs as a output device by itself.

With JRiver for example it is doable as it is possible to define multiple zones using the same output device but each zone outputs to different channels (it is called channel offset there).

Is it possible to achieve it with Roon?

AKAIK, it is not possible. Roon Core creates an endpoint based on its query response of the OS. The sound card would have to present itself as multiple outputs to the OS.

actually, I have two zones on my main pc right now. AND there are seven available zones in my PC. Not all enabled and I only use one at a time… but… It probably just depends on the card or system, 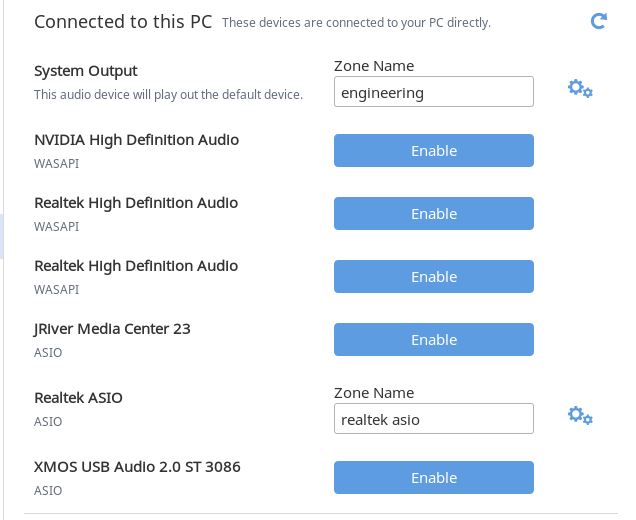 Even my ROCK has multiple zones available (none are enabled as I only use it as a server):

Not the same thing actually. In your pic, you are showing all the audio devices attached to your pc, but that is not what the OP is asking about. He currently has 1 audio endpoint that he would like to behave as multiple endpoints. In order for Roon to understand that, the sound card would have to appear as multiple devices to Roon.

Well, all the realtek stuff is one connection… and show up as separate endpoint or zones…I have nothing but the speakers “connected” to my computer audio. The other stuff is all internal also…just sayin’

So one connection from my computer to my speakers can output through whichever zone I send it to.
Right now those are “system output” or “realtek ASIO”. Two separate zones going along the same path to the same speakers.

If I enabled the Jriver zone I could then output to the same speakers with the same connection or one of the other outputs if I hook them up depending on how I set Jriver.

And as I said it probably depends on the card, his apparently does not function this way. maybe if he connected multiple devices or changed some setting ? it could work??

I have the same need, only worse.
I want a single device with only one stereo channel to appear as multiple devices, because I use this device (Meridian 818) both to drive speakers and a headphone amp, and I want different DSP settings for them. Not possible, AFAIK.

We discussed this with @Brian who actually has the same requirement…

Interestingly, Meridian equipment has this capability, call it a Shadow device, but Roon needs it.

Just to be sure, the OP may use the term “sound card” but if he is using a latest generation MOTU (as he says in the first line of his post) then I assume it will be one of these devices.

I’m not familiar with the latest MOTU devices, but as @rugby mentioned this may not be possible, depending on how the device exposes the outputs.

@Jonathan_Patya, what are you seeing on the Audio tab of Settings? Can you post a screenshot?

Not the same thing, like said above. The Motu is a multichannel souncard. The realtek in your example shows up as two zones because there are two different ways to acces it, exclusively via Roon, or via the system output. It remains the same two channels, it has not become a multichannel device. The Motu is a real multichannel device wich in theory could virtually act as multiple seperate soundcards but that all depends on how the software talks to the Motu drivers.

@mike, The Motu is shown as a single device, meaning I can use it as a single audio zone only (I can access it via ASIO or WASAPI, so theoretically speaking it can be configured as two zones in roon, one that uses WASAPI and the other one uses ASIO. However, it still won’t solve the problem, because even if it was possible to send it audio via WASAPI and ASIO at the same time, the audio would still be routed to the first 2 channels only).

@Sjef_van_de_Ven is completely right. The Motu exposes itself to the OS via its driver as a single multichannel device (can be even 24 channel device or more. depending on the model) and it is up to the user to configure via their mixer software which received input channel from the OS goes to which analog output.

Other Pro audio interfaces does exposes their analog outputs to the OS in the form multiple groups of 2 channel output devices.

Yep that’s right. At least in case of my RME fireface. That one shoes up as 16 audio interfaces. My Motu Ultralite AVB does not. It’s the driver that does that.Roon only sees what is reported by the OS as far as It seems. I als have a Focusrite scarlett 2i4 4 channel.card. have to check how that one shoes up, haven’t used it in a while.

I had chance to touch base with some of our devs today and inquired about the mentioned MOTU sound card. As per our conversation, if the MOTU is only exposing itself as a single output device, that is how Roon is going to interact with it, so there is not much that can be done right now, but I would highly recommend posting a feature request.

I also contacted Lynx technical support and they told me that their sound cards work the same way so it isn’t something related to one brand only.

Here’s an Audio MIDI screenshot from an RME Digiface USB on a Mac Mini.
Why is it hard to send multiple zones to a single audio interface? 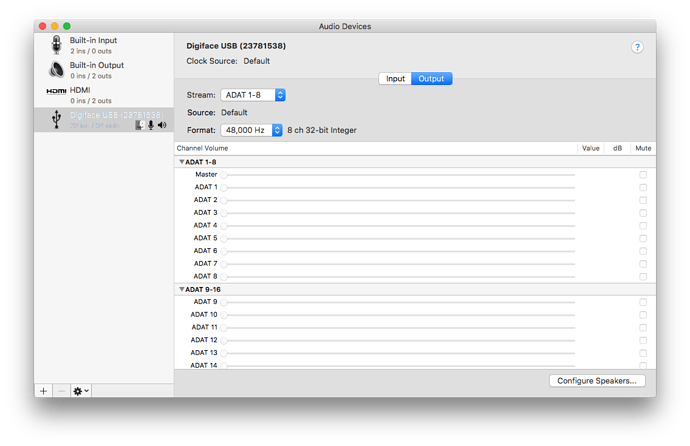 A 34-output audio interface should be able to run multiple zones.

You should open a thread in the Feature Request section explaining what you want. It will get more traction if you can identify a feature that would be relevant to users generally.