Credited Artists not found in Artists [solved — performers vs. Primary Artists, library vs. service only]

This bug might be caused by problems representing Slavic letters, but I did some tests and it doesn’t seem so. I am baffled.
I have two artists showing up who are apparently the same, with different spelled names: a Serbian woman listed as Yelena Kuljić or Jelena Kuljić. (To Americans that seems like a strange switch, but in many European languages they are pronounced the same.)

I had them show up on two different albums under different spellings, but they were not recognized as the same. I edited the credits for one album so both appear: 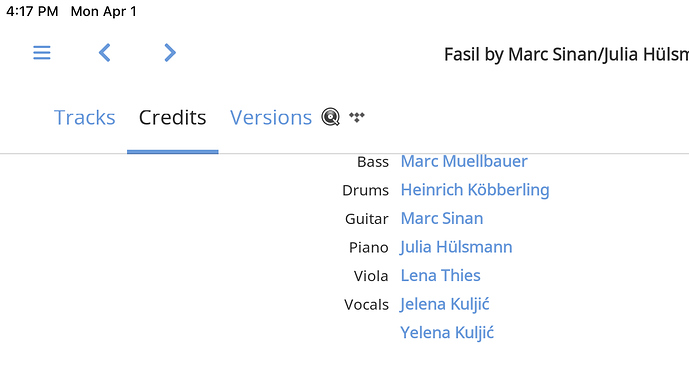 Then I went to Artists to merge them, but only one appears.
Search by last name and I get Jelena. (Spelling the last name properly with ć doesn’t help, in fact using only “kulj” still shows only Jelena.
Filtering on Yelena still fails, shows two artists order the name “Yelena” with no surname but not Yelena Kuljić. (In fact, “Yelena” and “Yelena K” are the same Yelena Kuljić, appears in the credits.) 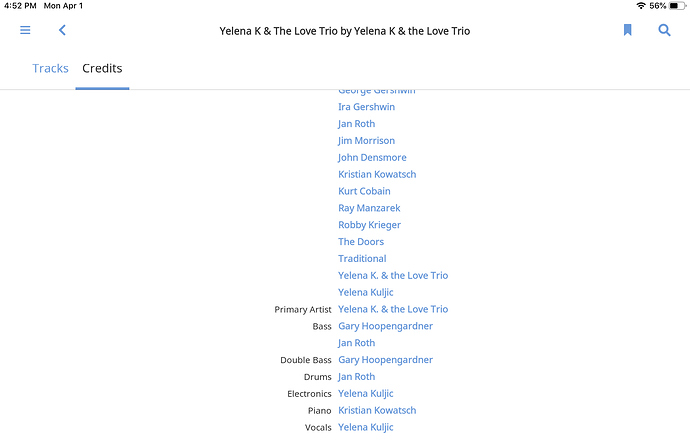 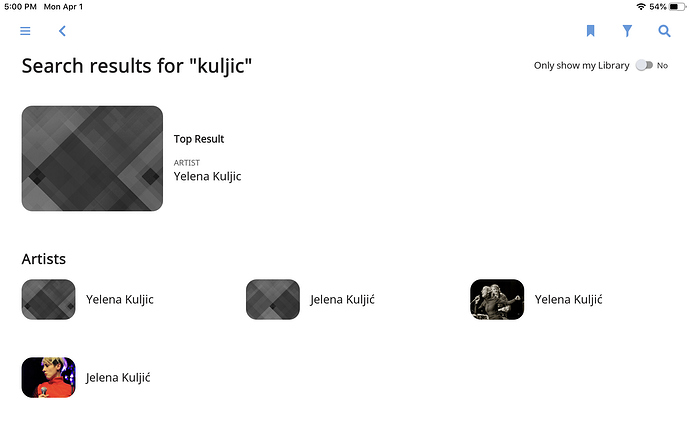 41E0F265-1C62-4506-B9D6-3178DA46B977.jpeg2048×1254 267 KB
I thought maybe there were different letters for “K” or “u” that were not visible but had different representations, but no: I went into both artists and edited the name, backspaced away the last name and then wrote Kuljić, and Roon wouldn’t let me Save, dimmed the button because there was no net change. (Anyway, that wouldn’t explain the lack of a Yelena in the Artist browser.)

So I’m stumped. Can somebody figure out what is wrong?

It looks to me that Yalena is considered a primary artist, whereas Jalena is a performer (vocals, etc) and so doesn’t appear in the artist browser.

When you do your general search, try selecting both people and a merge artist option should pop up. Select whichever one you want to be fhe primary.
Does that work?

What is supposed to happen is that Jalena and Yalena Kuljić should be considered aliases of each other with acknowledged differences in spelling, as often occurs with non-english alphabets. This could imply that this thread should be in the metadata section but I’ll leave that decision to others.

Ah, yes, I keep forgetting, performers don’t show up in Artists.
Have to make them both Primary Artists, temporarily.

The Merge operation isn’t available from the Search result.

You are right, these should be aliases, and we don’t have Edit control over that. Merge is imperfect, it is a one-time operation, if I merge to Yelena that solves it now but if a Jelena shows up in the future they are still separate. @mike I have brought up this difference between Merge and Alias before.

And this reminds me, the Artist browser is the normal thing, that makes sense, but for some purposes a complete Performer browser would be useful. @mike

The Merge operation isn’t available from the Search result

It is on mine… (I’m sure - Select more than one and use edit? Away from core at present)

but for some purposes a complete Performer browser would be useful

I quite agree - I have asked for this before

Interesting: I checked again, and when I select all four there is no Merge, when I select only two I can merge. No visible indication. I’ll inbestigate the exact causes.

One name is in the cloud only, not added to the library, can’t be merged, that’s normal, although it would be good to have an indication. But another is in my library. May be a composer credit… I’ll check.

Wrong, it wasn’t about the composer credit, that can be merged.
The issue was the artist that has only streaming entries, including her prevented the merge. 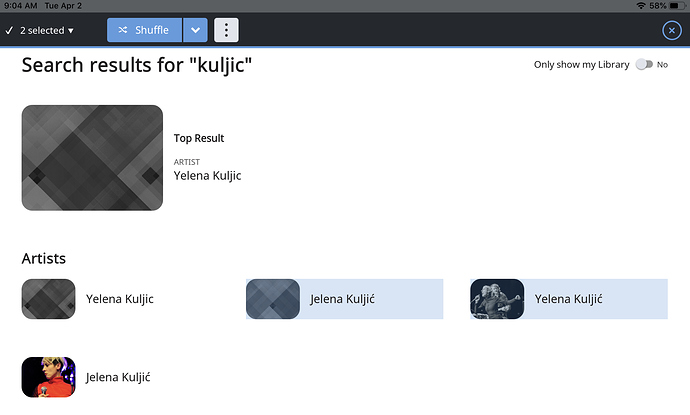 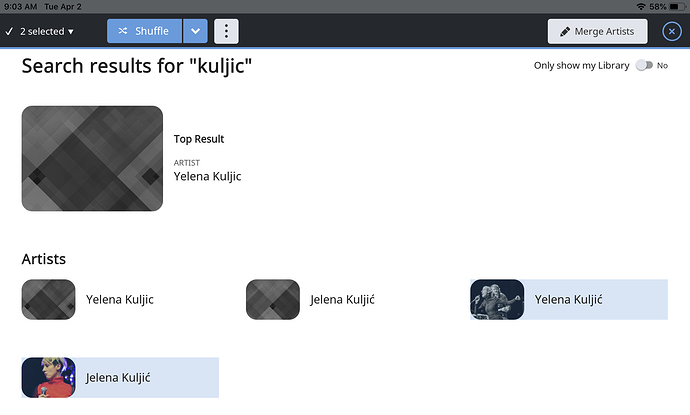