I have seen credit pages similar to the one below, where the “prime” (large photo) credit contains some decidedly “un-prime” contributors. Here’s my latest example: 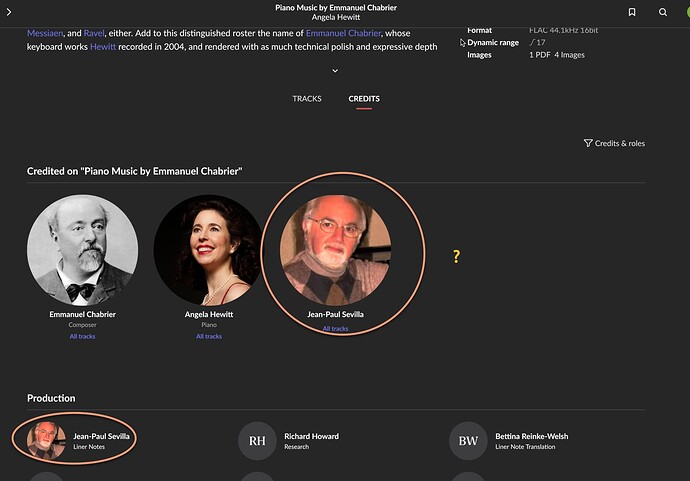 I have nothing against Mr. Sevilla, and his liner notes are exemplary. But, I question whether the liner note writer deserves the same emphasis as the pianist and composer.

It would be interesting to know why, from a programming viewpoint, Sevilla gets top-row billing.

I notice a lot of inconsistent handling of text vs lyricist credits as roon then munges up composer vs. production handling in all sorts of screens. Is this something similar where roon is munging up performer and production screen handling?

I randomly looked at a few solo piano albums and roon does not normally seem to give liner notes a performer billing. But, if it is the same Sevilla, then he is a pianist in his own right with several albums as a performer up on Qobuz. According to wiki he is also some kind of music Professor as well and that was probably why he was invited to do the liner notes. But he is clearly not a performer on this Hewitt album. So, you are right. Roon’s handling of the screen display in this case doesn’t make any sense.