Credits ("Credited on" vs "Also performs on")

Hi, I’ve been trying to solve this thing for Credits on the album for some time. I precisely reworked the Credits for all the songs (first remove and then link everything manually), and the same for the album itself. However, this thing bothers me and I don’t know why it displays so weird.

This thing clearly describes this snapshot: 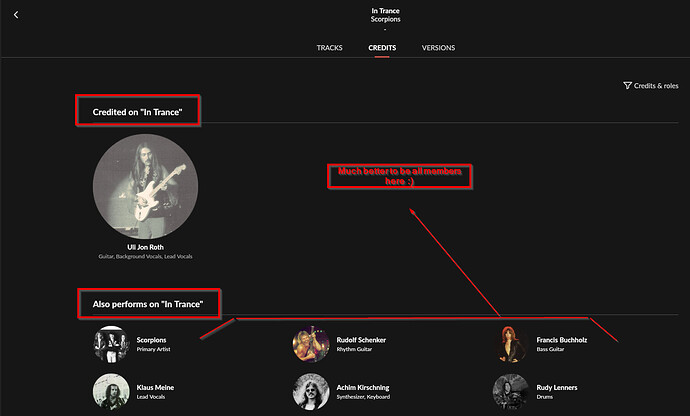 It probably looks like this, because Uli Jon Roth is an independent artist, but he is also a member of Scorpions (Similarly, Credits appears on the album even if Michael Schenker plays on the album).

My idea of integrity is that I would like to see all the members of the group who contributed to the album. Then they can appear purely Composers and finally the production and mix …

Has anyone figured out how to solve this and does anyone bothers this display too?

Thanks for the comments guys

Hi - I noticed this recently with Nevermind. Not sure which file tag contributes to this behaviour. I don’t see anything unique about the way Dave Grohl is tagged. 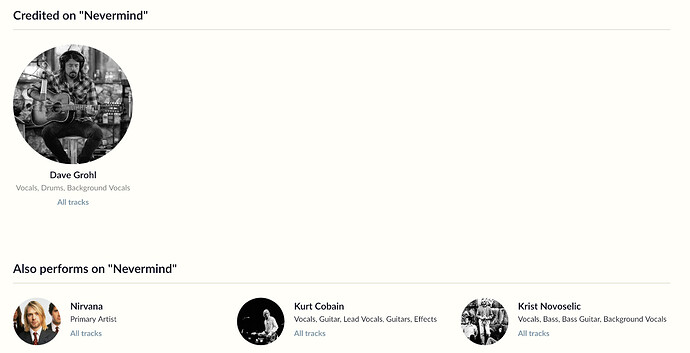 Of course, there is no reason at all for one of the members, who then go solo, to be emphasized in this way. It disrupts the whole concept of credits, where I want to see the performers on the album.

Can someone from @support comment on this please? Seeing similar behaviour with several bands. Metadata “richness” is called into question here. Megadeth, everyone is credited on the albums except poor Nick Menza who appears as Also performs. Even Megadeth appears as also performs even though primary artist. And some production guy is on the main credits. Doesn’t make any sense to me.

I have this occasionally with a production guy seemingly if they are “important” and credited on many other productions. I guess some similar statistics input is at play with the “credited on” and “also performs”