I use both a Samsung Tab S6 Lite and a Tab S7 FE. Both are fine. The S6 is smaller and easier to handle than the S7.

Pulled the trigger on the AMAZON FIRE HD10 PRO. Wireless charging stand and tablet for $220. I am not sure how that can be beat

Great discussion. Thank you all.

Thanks to everyone who has answered. I infer that opinions vary on a good solution. Apple sounds interesting, but an iPad won’t run BubbleUPnP, which I still use from time to time.

Renderer (Auralic Aries G1) and Core are on Ethernet. We have high-speed service with Comcast (theoretically Gbit), and I use a “smart” switch to prioritize the ports used for audio.

WiFi is through a good router (ASUS RT-AC88U), 5 yr old, all firmware updates applied, and still a current model. WiFi signal is very strong; the 5 GHz band is largely dedicated to the Roon Controller (tablet). Last time I checked by running the Aries via WiFi, there was no problem playing 96/24 files at least, maybe 192; I don’t remember.

The controller (Roon Remote) is a Samsung S2 9.7 with 32 Gb of internal storage, a large new SDXC card, and 3 Gb of RAM.

The intermittent slowness noted is failure to load album art and sometimes other metadata, or to display search results that query Qobuz. This may have improved after changing system settings.

I don’t want to use a phone as controller, because the cut-down Roon Remote for phones doesn’t have the play-count field. I find that invaluable as I work through large sets of, say, Haydn Symphonies or Scarlatti sonatas.

I am left believing that either the Samsung is too slow or memory limited, or that the ASUS router is nearing EOL and having intermittent trouble. But others have said that they use the same Samsung successfully; and I don’t note WiFi trouble on any other devices. Indeed, when I do use my phone, it has no problems. So it’s a puzzle, but one pointing towards the tablet.

I now have plenty of suggestions for tablets I could try. Before spending, I’ll try to borrow one and see if it works better.

Your NUC configuration sounds good, Mike. Have you several controllers, for example, Roon on a laptop or desktop computer? Does it exhibit the same slowness at the same times of day that your tablet controller presents? This check will tell you if the trouble is your controller or a busy Roon and Qobuz.

How many Qobuz items are in your library? in comparison, I have about 2100 artists, 3400 albums, and 39,000 tracks indexed. The controller is a POP_OS Linux VM running under TrueNAS 12 FreeBSD distribution. The local media resides in a dataset in the TrueNAS primary storage pool. A second pool is used for TrueNAS backups, a third pool is used for Roon database backups. The machine is an Intel(R) Xeon(R) CPU E3-1225 v5 @ 3.30GHz (modest as server parts go) on a SuperMicro workstation class motherboard having 32 GB of storage and a RAIDZ2 array that holds Time Machine backups, local media, and photos and videos.

This host is very responsive during the US Eastern mid-day. Queries complete in a second or two using a MacOS controller on the hard Ethernet. ISP is Cox mid-tier cable. In the evening, it is a bit slow talking to the iPad Mini controller over WiFi (Ubiquity In-Wall HD).

As the East Coast comes home and the UK is doing post-tea listening things slow down a mite. Album loads take longer than 5 seconds and I sometimes restart the controller iPad if it is really dragging.

At the risk of arousing the Android fans in the crowd, I’d recommend adding an iPad 64 GB version as a controller. These list for $329 new from Apple. My portable controller is an iPad Mini 5 64 GB version. In the evening, there is delay responding to album queries as noted above. Qobuz tracks are also slow to start playing. That’s the nature of the beast.

The primary reason I make this recommendation is that it is Apple and not a disinterested carrier pushing iPadOS updates to the iPad. Enable automatic updates and they happen over-night with only user action to say, ok, do it. You’ll be asked for your pass-key. That’s it. Apple just closed some zero-day exploits last night. Ars Technica is very good about announcing iOS and iPadOS updates.

I’m pretty cavalier about trying iPad software. If I were an Android tablet user, I’d not be so quick to try stuff. Google Play Store is a rough place compared to the Apple App Store. With Android there seems to be more burden on the user to keep the machine clean and up to date. Tablets shouldn’t be so bad as only Samsung is involved and there is no carrier experience enhancements to deal with.

Thanks, David. I have a Roon controller running on my Windows computer, and that has no problems of any kind. Even the Android phone (now ~ 5 yr old) does fine. It seems to be only the tablet that causes problems. Too little memory, Android too old, processor too slow?

I agree, Apple’s update policy is far superior to any Android vendor.

Arrgh! Now I am back to thinking this is a Roon issue.

Roon on my Android phone started not loading album art. Close Roon there and restart it, and the album art loads immediately.

It’s hard to see how this is anything other than a Roon issue. What else could cause this?

@support – How many Roon staffers are using Android devices as control points at home and/or work for many hours a day? This is a frustrating problem indeed, and I can’t understand why it has proven so difficult to pin down.

I have it on very good authority that the Kindle Fire 10" HD makes for a superb Roon Remote.

Thanks for the reply! I’d prefer something not tied to a particular retailer, but I won’t rule it out.

I have a Fire 10 that I got for $69 refurbished from Amazon (which I hate BTW) and it does nothing all day every day except be a Roon remote. Once you tell it not to sleep, in Roon, you never have to deal with the adds. It actually is an Android based device. I got a cheap stand, mounted to my desk at it is always at the ready. For less than $100 total it can’t be beat, IMO. Flawless control, never crashes, responsive. No fumbling for you phone and unlocking it. If you get on VPNs for work this one stays tied to your home network where Roon is…which was a problem with my computer and VPN.

I seriously can’t imagine anything working better if you are looking for something to be in one place and always ready. 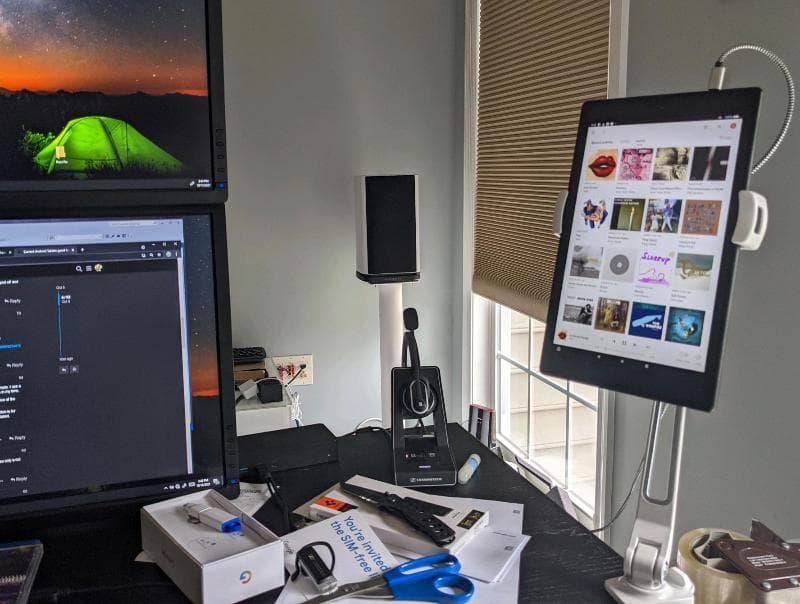 EDIT: A wile back I had a 6-7" Samsung (Tab 4 maybe) it was terrible. I chalk that up to processor and memory. Tons of Android phones around my house form Google and Motorola and ever since Roon got the 1.8 version fixed they have all been as good as they were before. If you are having problems with Android phone beyond the screen real-estate I’d suspect its storate/memory/CPU not Roon…and I was very critical of Roon when they had it wrong on Android with the release of 1.8. Virtually unusable. Flawless the last many months.

Its so cheap I don’t even worry about screen burn in if I forget to turn it off for the night. Many days I walk into work and it is still on whatever roon screen I left it on. I care more about the minimal electricity I use when that happens than if it is bad for the screen. Basically throwaway prices.

Another vote here for the current Fire HD10. With Black Friday coming up, you can expect to see it on sale for under US$100. I use it as a dedicated Roon controller (great to have something that doesn’t have my email on it and isn’t logged into any social networks!), and it works brilliantly.

Is it possible to turn on logging on the Roon Core? If so, you might be able to get some insights into the Core’s behavior when you’re experiencing issues.

Is it possible to turn on logging on the Roon Core?

Thanks. Can you point me to something describing how to do that?

I recently got the Z Fold 3, an unexpected benefit of the hybrid is that when using roon i can listen in mobile and switch to the tablet version of roon when i want to use the extra features.

Command Line Flags Occasionally, Roon Support will need more detailed logs about an issue you're experiencing. In these cases, they may ask you to enable additional logging using something called a command-line flag when you launch Roon. This flag...

Oh, thanks, @Robert_German. That’s why I couldn’t find it – it’s requested by support, who in my case have never requested that.

I may have resolved my remote hanging issue.

I recently decided to see how others were organizing their libraries when I can across a thread regarding Tags.

How do I nest tags within tags? Roon Software

Just be careful about using Tag names which are the same as Roon’s Genres.

I had several Custom Tags with the same name as Roon’s Genres. I changed all of them and rebooted my Core. For the past 36 hours, I haven’t had a single issue. In the past I had the Pulsing Roon logo at least once a day.

I’ll report back if the issue returns.

I have had a busy Roon day as we’ve been puttering around the house. We have several zones all using various forms of a Sonore Rendu. Today all Zones were synced. I used my phone quite a bit today as a Remote with zero issues. I hope this fix sticks and helps others.

It’s been several days now and I haven’t had any issues with my Android Tablet or Phone. At this point I feel pretty comfortable saying that my issues were related to custom tags having the same name as Roon provided Genres.

I’ve run the new tablet for several days, with nary a glitch in Roon. I am happy that it works well and also disappointed that the old tablet, just a few years old, was not functional for Roon. I like Roon and am aware that its TCO keeps increasing.

The new tablet is a Lenovo Tab P11, as follows:

I set up a Restricted User so people can access Roon but not my email, documents, etc. I see that the old tablet had that, but I never set it up.

So, all in all, a more positive than negative outcome. But that has come with a jaundiced understanding that these gadgets (phones, tablets) are the new drivers of pointless profiteering through planned obsolescence.

How is your experience with the p11 as remote?

I’m using a Fire HD 8 dedicated to Roon. I also have an iPad and iPhone, but found having a dedicated remote always near my listening position to be a better experience. Also, the Fire is smaller/lighter than the iPad so easier on space and holding for extended listening sessions. The Fire can be set up to be ‘Always On’ when connected to mains, so it’s always ready to go with a touch (I do save energy by switching the mains off overnight). When Always On, the screen dims after a short time, but awakens immediately with a touch so Roon is very available (and I use it for many hours every day). The screen is crystal sharp as well. Hope that helps

Just be aware it is the cut down phone interface on the hd8 not the tablet interface.