This is something I’ve struggled with for a long time. I create a lot of my own content, which I often upload to Roon. Once uploaded they are, of course, unidentified. Despite all my efforts to keep Album Artist, etc., the same on all the tracks on one of these “albums”, Roon often pulls them apart, presumably (it appears) because not all the files are of the same type. (Some are 24-bit, some are 16-bit, etc.) I’ve even tried tagging them all with a common tag.

The obvious alternative is to keep track of them with playlists instead of albums, but this approach has a couple of problems. First, I end up with several partial albums that polluting the server. Next, it can be hard to find the individual tracks in order to add them to the playlist: I upload then spend a good bit of time searching around.

I hope the problem is clear. Ideally I’d be able to create my own totally custom albums. As an alternative, I need another sensible way to accomplish the same thing.

Hey @Jim_Austin — Thanks for sharing your observation with us, we appreciate the feedback!

In the event that Roon doesn’t group all of the tracks together, you can find the tracks based on their path and merge them into an album. We have a great article detailing that process here.

Awesome, thanks. Based on my experience, you guys have solved most problems. The remaining problem is that the solutions just aren’t that obvious. To put it another way, like a lot of powerful tools, Roon rewards careful study and close familiarity.

Hey, quick follow-up: Now that I’ve merged these tracks into an album based on their path, what happens if, in future, I add more tracks at this path? Will they be added automatically or will I need to manually update? Not a big deal wither way–just curious.

Since Roon now sees these tracks as an album, new tracks added to the path will not be added to this album. You can still use the method mentioned above to merge manually.

OK, that was interesting.

New custom “album” uploaded–six versions of the same track in different formats. Same everything (except filename, which indicates the format and modification history in rather technical terms) although I didn’t bother to add metadata in most fields (why bother since I can now group into an album manually?).

The result: After grouping into album, immediately recognized as this: 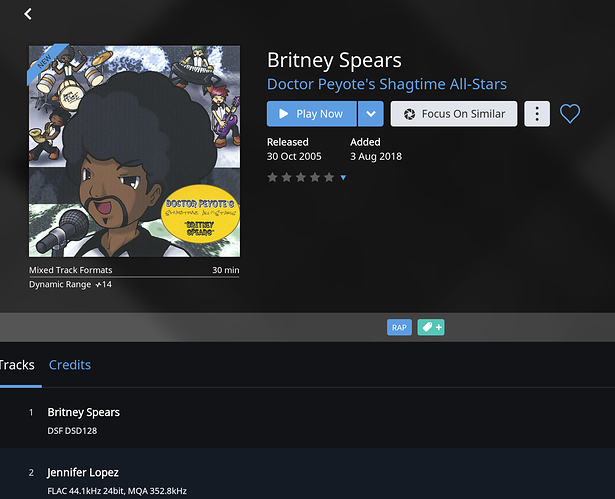 Not exactly the outcome I expected.

Thanks for reporting this, it looks like our identification process made an error with text matching. I’m going to pass this along to the team to investigate further. For now, the best option is to unidentify the album.

Thanks Dylan. I tried to un-identify the album but could not figure out how. I could see how to “identify” the already identified album, and how to “re-identify” it. But at no point did I see an unidentify option. Thanks.

If you go to Identify Album and choose the None of these look right options on both screens you’ll be given the option to Use Basic File Information. This will unidentify the album for you.

If you want to create your own custom albums, they will have to exist as Unidentified.

If you want to create your own custom albums, they will have to exist as Unidentified.

Right. Read the thread from the beginning. It’s not long.

Thanks Dylan, that worked. I had tried something I thought was similar–de-selected “Use file tag info”, but that’s obviously a little different.