I’d like to see the ability to add personal notes to albums (or even tracks). Could be personal review, custom settings of my equipment, memories, date/location where I picked up the recording, gift, shopping list

I’ve been asking for this for years. It’s really something I miss daily.

I would love to have something like this as well. If we could include an nfo file with XML that roon reads in the album directory. Roon could just parse info from the nfo file and put in in some designated fields that would be viewable in roon.

They could use the FLAC Comments field for track comments. That would be most future-proof.

If this is to be considered, it would be great to enable such a feature at multiple levels (e.g. track, album and artist). I think it could create a sort of musical-journaling feature. Interesting request…

+1. Would be great to be able to add notes to particular tracks or albums. The comments field in the tags could be used - though some users (myself included) already have info in the comments field which isn’t personal comments. It therefore might be preferable for some other ?custom tag/field to be used.

I agree, at the least using the comments field to put information for display in roon would be a great start.

They could use the FLAC Comments field for track comments. That would be most future-proof.

One way or another, I would really like to be able to display the Comments field in Roon. I think (obsessive-compulsive) people already use this field for a number of purposes. A friend of mine uses it for “performance notes” on classical works. I’ve been using it for quite some time to stash track-by-track personnel info. With all the missing personnel data in the All Music database, it would be great to be able to display my own personnel data from within Roon.

One way or another, I would really like to be able to display the Comments field in Roon

This can easily be done right now on an individual song basis. Click album to see songs, right-click on a song, click ‘track info’ at top of screen, click ‘file tags’ (in blue), scroll to comments field (if it has info)… 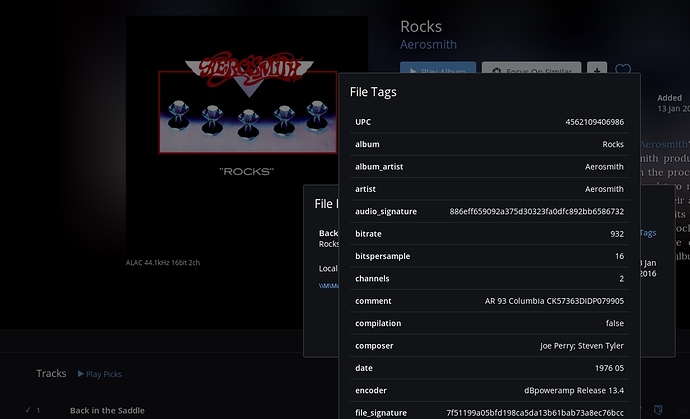 Wow! Thanks for the tip. I simply had not seen that before.

Very cool! Still, it would be awesome to comment at the album or artist level which would then reside in the Roon database rather than the individual flac track tags.

Taking this request to the next level:

Notes with timecode, being displayed / highlighted at certain passages in a song / work

This can easily be done right now on an individual song basis. Click album to see songs, right-click on a song, click ‘track info’ at top of screen, click ‘file tags’ (in blue), scroll to comments field (if it has info)…

Thanks for this. I’ll try it when I get home. (Maybe “File Tags” is not the best name for this?)

This can easily be done right now on an individual song basis.

Thanks again. I followed your instructions and this is a little tweaky, but it serves my purposes.

Any plans about this? This would be just awesome for album level and/or artists level so you could write where did you bough that album or whom recommend this for you etc.

Yes, but think about the devices we use.
No keyboard…

Would like this feature as well. A personal note/review is usually much better than stars and hearts.

I wrote about it in length also here back in 2017.

Hi, this really is to put a new slant on why it’s so important to be able to write our own editorials for albums and artist or edit the ones that are there. Most of us today suffer from the very 1st world problem of simply having too much music. Period. Now Roon has made this even “worse” by allowing us to add almost infinite amounts of more music to our collection via integration with Tidal. So we can merrily add potentially 100’s of albums a week to our collections, reading editorials left r…

hadn’t seen this thread til now

I’d love to see something like this. I find myself wanting to note down why I liked something (or why I didn’t like it).

I have found that if I come across really interesting albums reviews, I’ll PDF them and drop them into the directory so it can be easily accessed from within Roon. Still, not the same as private comments.