Hello
I have MX DAC by Musical Fidelity andrunning Roon on windows 10.
Somehow when choosing “Exclusive Mode” i get only 44,48,88,96 in green and the others are red.
My DAC supports up to 192 + DSD 256.
I tried already to reinstall drivers and even reinstalled the whole OS.

I’d be happy for any kind of help 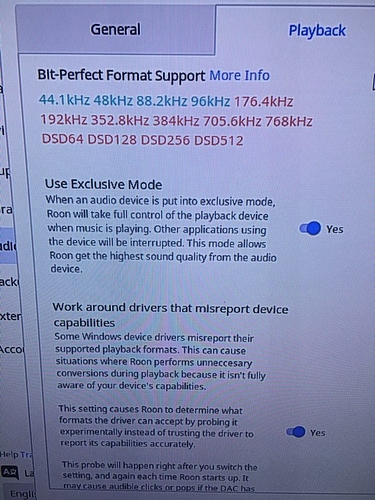 What is the computer? Does it have other ports you can use?

Any change with that “Work around drivers” option turned off?

This can happen when the DAC has associated with Windows in USB Audio 1.0 mode.

Generally, Roon is just reflecting to you what the driver claims that the device can do–the solution to this problem is going to be lower level than within Roon itself.

I tried all the ports , nothing changed

What are you seeing in Windows “Speakers” properties? Are the higher sample rates listed there? 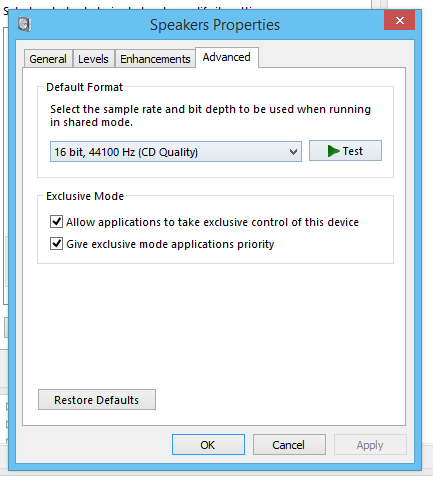 Any way to confirm the DAC isn’t connected over USB 1.0?

all ports are 2.0, and playback device shows the full list .
I also tried to connect it to my Lenovo laptop and immediately it recognized it as 2.0 .
I don’t know what happened , it’s really frustrating…

Hi @Dan_Ganon ---- Thank you for the follow up and my apologies for the slow response.

Moving forward, just to clarify a bit as to what @mike was asking for in his post. When the MX DAC is mounted to the Win10 machine we would like to what “sample rates” are listed as available for the device on the OS level.

So using Mike’s screenshot as the example, we would like to see what information the dropdown tree under “default format” contains for the DAC.

Hi , first of all thanks a lot for your comments .
I have solved this by reinstalling the audio 2.0 class driver , and now it works well.