@support
Just had a PC crash (Windows 10) and on restarting I have the message shown below :-

Roon starts-up ok, but obviously stops at this step.
I had another crash earlier today, but everything restarted fine that time.

Last backup I can currently find is from March 2016, although I’m sure I’ve made several since then - I’ll keep looking !!!

Windows 10 Pro Insider.
i7 Desktop PC.
Running 64bit Roon, with Tidal / Last.fm enabled.
Music is all located on a NAS.
System hasn’t changed for >1 year, apart from (the normal) Roon updates.
No PC (Windows) update today, but crashes aren’t entirely unusual. This is the first crash in ~1 year that’s caused a corruption.

Just found another backup from the 26th September 2016 although I think I would have lost quite a bit of information in the meantime.
And yes, I know that I should have made a more recent backup - I’ve even written it down as a “must-do” for the New Year !

@brian2 @kevin @vova @eric
Which files do I need to replace (from my last backup) or remove in order to get Roon running again ?
Thanks !

Hi @rolski ---- Thank you for the report and my apologies for the troubles here. In regard to your question, this is what you will want to do.

OK, thanks, that worked - but all of my settings / links / network addresses - everything is gone…
No way to recover anything at all ?

[Roon is now busy re-scanning everything].

Hi @rolski ---- Glad to hear that the procedure worked and this information should have indeed been recovered as long as all of this was up to date when the back up of your DB was made. May I ask you for the following:

Therefore a question : has my backup achieved anything whatsoever ? Doesn’t look like it… 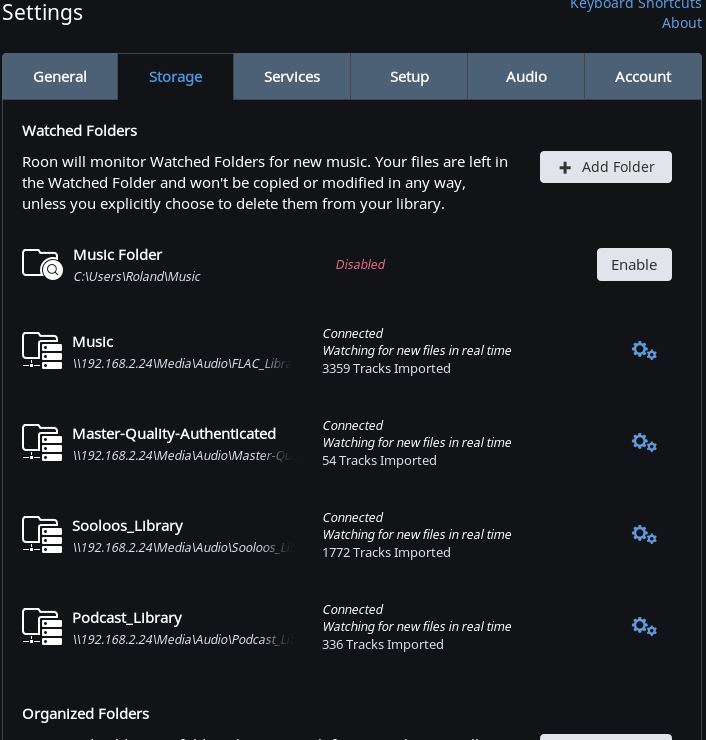 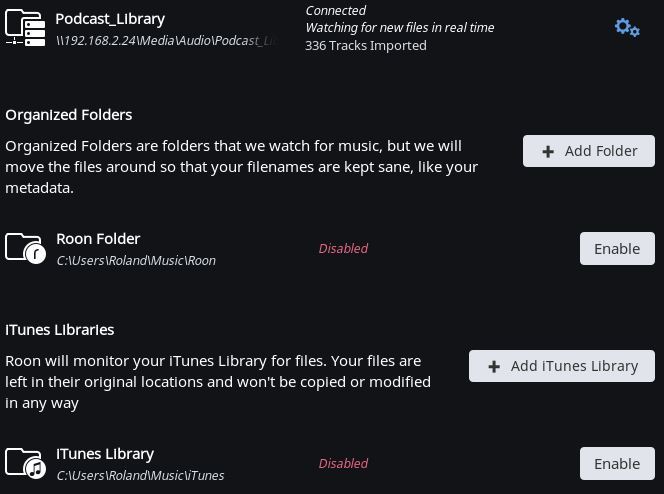 Does that all look ok ?
As mentioned, I’ve had to add all of this by hand again : it seems that nothing whatsoever has been read back from my previous backup (restore).

-correction- My Last.fm profile / password / settings were added, as was my Avatar. That’s it, though !

My Last.fm profile / password / settings were added, as was my Avatar. That’s it, though !

This information is tied with your subscription and saved in the cloud on our servers, that’s the reason why it is on place.

As for the rest, it does sound like a new installation. Would you mind to describe in details what exactly did you copy to the %localappdata% instead of the corrupted DB? Maybe take a screenshot of the content of that folder ? How big is it in Mb or Gb?

Checking the directories from the backup (Roon_2016-09-26) it has:
Application
Cache
Database

…whereas the new / current installation also has the directories:
Logs
Settings
Temp

Odd ?! Question is - are these three (missing) directories the key - to which I guess the answer is “yes” particularly as one of them is called “Settings” (!) - but the follow-up question is why didn’t they copy over when I created a backup…?
The backup procedure I followed was to ensure my Remote & Core were both shut down, to make a copy of the whole folder, then to rename it, then to move it to my backup / storage area (away from my PC, on to my NAS).

They contain all the info you are missing. The good news is that as soon as the ‘File import’ will be finished you should get all your library edits back (made before the backup). Your tags, bookmarks, history etc. should also be in place.

why didn’t they copy over when I created a backup…?

Unfortunately I can’t answer this question. Copy procedure is handled by the OS, so no theories here. Common sense tells me that all five should have been in place if you were copying the ‘Roon’ folder…

Thanks and apologies for inconvenience once more.

@vova @Eric
Firstly - no need to apologise at all - it was my machine that crashed !
…although…an automatic / regular backup may have saved a bit of pain…

As for my backup being incomplete - I agree - it’s the OS (or me) that has control over that. Weird. I can’t explain that.
But I’ll be sure to keep an eye-out from now onwards !

Finally, are you suggesting that I copy back the Settings / Logs / Temp folders back - from the “old” / corrupt Roon folder from pre-crash (from earlier tonight) ?
Roon’s finished scanning now, but obviously no tags / bookmarks / preferences / settings etc have been carried-over as (new) Roon has no way of knowing what they should be.

You can try to copy Settings folder. You need to terminate Roon, rename current Settings folder to something else ( just in case something goes wrong) and copy the one from Roon-old. There is no point in switching Logs and Temp.

Roon’s finished scanning now, but obviously no tags / bookmarks / preferences / settings etc have been carried-over as (new) Roon has no way of knowing what they should be.

Did I understand you right, you aren’t seeing playlists, history, tags and album’s, track’s etc. edits which were made/created before the backup. Note since you didn’t have original Settings folder I’m not expecting you to see old settings/preference.

I’ve moved the old Settings folder back as suggested. No discernible differences - I haven’t noticed anything obvious - but I’m sure the settings are all returned to the previous state.

However, no tags (I’ve only just started using tags, but I’d tagged all my Tidal Masters / MQA files) - they’re all gone.
I only had a couple of simple playlists - they’re back !
The History is from the September backup - but that’s not a problem.

So, the only curiosity is the Tags - depending on what you think should have happened ?
And this is the only PITA because now I don’t think there’s a way of identifying the Tidal Masters albums that I’ve added over the last few days, is there ?

Glad to hear that you were able to restore your settings. As for the rest:

However, no tags (I’ve only just started using tags, but I’d tagged all my Tidal Masters / MQA files) - they’re all gone.

Based on this statement I can make a conclusion that tags you are expecting to find in current DB were recently created (TIDAL introduced MQA recordings ~10 days ago), and as I was mentioning in my previous messages - you should expect to see only tags, edits etc. which were created before the backup. The reason is that we store this information in Roon’s database and in your case it has got corrupted.
So, this is an expected behavior to not have those tags.

And this is the only PITA because now I don’t think there’s a way of identifying the Tidal Masters albums that I’ve added over the last few days, is there ?

@vova
Aha, thanks - that explains things : the tags are are in the database & not elsewhere.

I understand the way of using Focus, but the immediate problem is all of the new MQA / Tidal “Masters” were “favourites” and imported at the same time - thus it was very easy for me to simply highlight them & add a tag, because they were all added / imported at the same (or a similar time).
These tags have now gone, as my database is corrupt, so - as there’s currently no way of (positively) identifying Tidal-streamed MQA tracks (I’m sure there’s a good & logical reason) I can’t see which one’s are which.
I can Focus on Tidal tracks, but then I can’t also focus on, say, 24bit… This is something that’s been mentioned / requested many times since Tidal “released” Masters, so I’m sure there’s a fix coming soon.
I can of course find / focus on purchased or downloaded MQA files, as the embedded tags are correct - it’s just the streamed MQA files that have disappeared - and there’s a lot of them !
Hope that makes sense.

Anyway, thanks for the very quick help / support - I’m happily listening to Roon once again !
Now, where are those damned Tidal Master tracks hiding…

Take ONE Album you know to be a Tidal MQA Album

Open it in the Album Detail screen… What does it display for the Album Import Date??

Now try a Focus based on that Import Date and see if it captures some or many of the MQA Albums??

Another thing that may help… Go to the Tidal app and display the “My Music” section… Click Albums… And this seems to display the Albums from the most recently added in descending order… And given that the MQA albums have only been available for a week, then that may help pinpoint and Tag those albums within Roon, albeit Manually

To simplify what I wrote above…

Do a Focus on Tidal Albums only

Within that Album Focus, choose the “Sort by Date Added” in the top right drop down box

Depending on how the Import Date is interpreted, Roon will hopefully display the recent MQA Additions at the start or end of that list… Enabling a Multi-Select plus Tag to tag these as MQA

Can’t be sure it’ll work, but worth a try

@Ronnie
Thanks for the suggestions - which have partially worked - but not completely, for some reason that I can’t quite fathom.
Roon also seems generally much less responsive at the moment, although my other Apps seem ok, so perhaps it’s something to do with the latest build of Windows 10 & the audio / graphics side of things.
Oh well, I’ll get (back) there eventually - thanks for the help !