Prince was such an icon that many, for better or worse, already hold an impression of him and his music. Irrespective of one’s personal opinion, the question remains: was he actually the musician his reputation suggested? Or was he a lucky participant in the Hit Factory? (It’s worth noting that he controlled his music to such an extent that he even created his own bootleg business after finding out that Italy was making money bootlegging popular artists)

Many have heard that he played 18 instruments well, and perhaps some of us have seen him rip on the electric guitar at the George Harrison tribute (if you haven’t…it’s worth watching: Prince plays at George Harrison tribute). But 18 instruments? Is he actually good at any of them? And good compared to what? Since many of us can only just play a single instrument (or less), it’s hard to imagine what it means to be a multi-instrumentalist.

His post-humous release recorded in 1983 was just a session recorded with him in front of a piano. Piano is very different than guitar, and acoustic piano was not often featured on his music. I would argue that it is also generally easy to hear the difference between good playing and great playing.

So with that backstory, this is what we’re listening to today. Check it out! 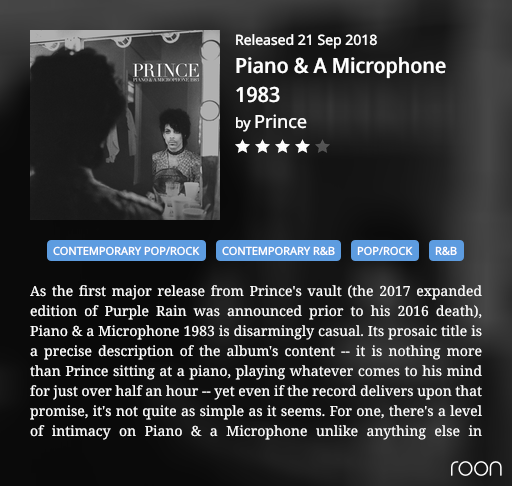 More a record of various demos than an actual finished album. Plus I don’t think the recording was made to showcase Prince’s piano playing, rather that Prince just used the piano as accompaniment.

Loved that. Regardless of the intent of the recording it was such an intimate session and shows why Prince was considered the talent he was.

I have this album…I will say I am a Prince fan, not a Prince devotee.

As @dannybgoode said it was an intimate session, which I think accordingly gave great insight into his work.

I do think his ‘reputation’ & larger than life persona often turns people off & it seems he’s unfairly an artist that people either tend to love or loathe. I think that’s based more on his image, rather than content.

I gave this 5…really it’s a 4, but perhaps it is only meant to appeal to erstwhile fans, rather than garnering a new audience.

Prince was such an icon that many, for better or worse, already hold an impression of him and his music

Aaaah, I think that’s exactly what I was saying.

I imagine stumbling upon this brilliant man playing piano and singing and forgetting the world for a short wonderful time. This recording–from a single take–may be unpolished but that’s why it works. Indeed Prince was a brilliant and talented artist and probably the best live entertainer I’ve ever seen.

I’m not going to list any picks; it has one track and lasts 34 minutes.