Daylight Savings and ROCK [Report is in]

Does ROCK not take account of daylight savings? This is trivial for me, but I can imagine if you have home automation that is time-based this could mess things up.

That’s strange. I’m running ROCK on a NUC here in the UK and backups are running at the right times. Maybe your NUC is taking a while to catch up?

I thought it was strange too. I don’t know a way to check the system time or do any admin on it - the beauty of the black box install - I shall see what time the back-up happens tomorrow morning and see if it’s caught up.

If it hasn’t, it might be worth a delve into the time and date settings in the BIOS.

Roon itself does though, surely, unless I’ve misunderstood your post, in which case apologies.
We’re now on BST, one hour ahead of GMT. If I run a backup it tells me the correct time rather than being an hour out, as the OP is experiencing:- 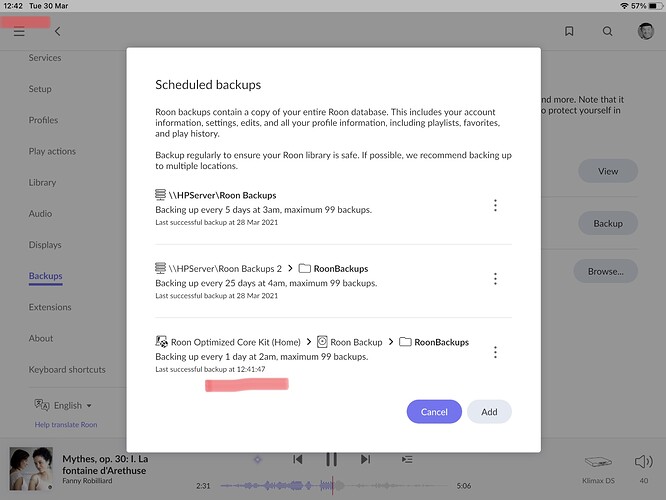 ROCK is an OS right? Are you saying the underlying OS doesn’t support it so ROCK doesn’t do daylight saving times or that Roon as a policy is keeping everything at UTC, e.g. from a global sycnrhonisation perspective?

Just to be clear what I’m talking about. In the image below it shows the only back-up I’ve ever set-up since I installed ROCK on my NUC. The back-up was set for 4am every day. Since the move to daylight savings my 4am backups are now displayed as scheduled for 5am and the backups run at 5am. This is a hard thing to check again as I can’t change the clock on ROCK. Maybe I’ll see what happens in October when daylight savings goes away. 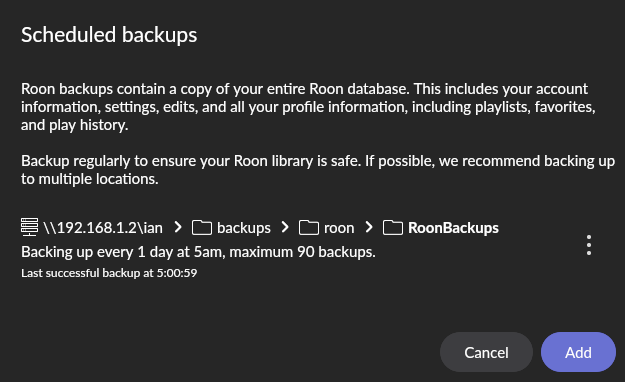 My backup was set to 2am GMT last week. Looking at the internal logs, that’s when it happened.

Just before DST started, I changed it to 1am. Looking at the internal logs now, that’s when it occurs - 1am GMT. However…

The Roon UI now shows 2am because it understands DST and knows that is really 1am GMT.
If I had not changed my backup time, Roon would have backed up at 3am BST (i.e. keeping the same 2am GMT time).

So the Roon backups are consistent GMT times all year.

I’d love to get to the bottom of this intellectually, to do that I think there are the following things to look at:

ROCK/Roon OS - these are the same thing right?
Roon Server - running on the ROCK/Roon OS
Roon Remote/Client - the macOS client application I use for configuring Roon
NAS - the place the back-ups are done
macOS Catalina - the place I view NAS files from

2.NAS - this is where the files end up and they all had 0400 timestamps when under GMT and now all have 0500 timestamps under BST.
Roon OS is making an SMB connection to my Linux-based NAS to create the files with a timestamp. Whose timestamp is that? Roon OS or the NAS? If Roon OS is always GMT then it could create files with a timestamp of 0400. If it’s the NAS, which is in BST then it’ll create the files in it’s time - most likely. Like with the example above there may be abstraction through SMB to local time or by macOS which shows me the timestamps.

Ultimately it’s a bit weird because if everything else you have remains at 0400 local time, but the Roon back-ups all are delayed by an hour we have some consistency issues. My alarm doesn’t suddenly go off at 0730 in BST when it normally would have gone off at 0630 in GMT. It continues to go off at 0630. I don’t have a problem with this, but thinking about anyone with a complex set-up relying on consistency in back-ups it may cause issues.

ROCK/Roon OS - these are the same thing right?

Essentially, yes, although “Rock” is often used to cover Rock OS and Roonserver.

How can I check the time on Roon OS if it’s a black box?

Look at the logs, see this KB article. When Rock starts it queries a NTP server and gets UTC time. It is up to the processes elsewhere to display this as they see fit. I assume Roonserver does the clever remapping of times as displayed in the clients.

Timestamps are time-zone independent (ignoring FAT) and are displayed according to the OS/process used. This may or may not display times of files created before DST in the current time form. For instance, my older, pre-DST, backup files now show a “timestamp” of 3am, when at the time they were backed up at 2am GMT.

Roon back-ups all are delayed by an hour

Yes and no. They still occur at the same UTC/GMT time.

My alarm doesn’t suddenly go off at 0730 in BST when it normally would have gone off at 0630 in GMT.

If it’s an old fashioned one, it does.

Thanks for your help, I’m happy to know a bit more about the guts of Roon.

Look at the logs, see this KB article.

Thanks, I forgot about this folder after adding the Codecs.

Ian: Roon back-ups all are delayed by an hour
Brian: Yes and no. They still occur at the same UTC/GMT time.

I guess everything is relative

If it’s an old fashioned one, it does.

Thanks for the feedback here! This has been passed along to our team.