I want to rip my library into my Roon Nucleus and import it into Apple Music so I can have a Time Cap back up to all? 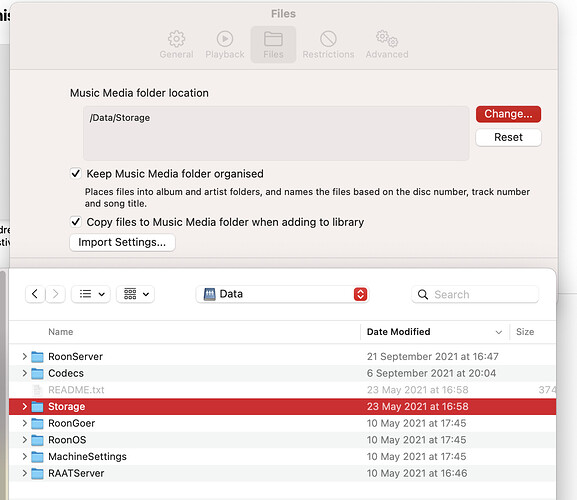 Do double check that the above route does actually backup your files. I’m not 100% sure if TimeMachine will backup remote files, even if Apple Music is set to use them as it’s music library.

Another option would be to sync the Nucleus music library onto the Mac (effectively use an app like ChronoSync or a command like rsync to make a synced, local copy of the files) and then use TimeMachine to backup that local directory like you would any other. Although this would require you to have the spare disc space on your Mac to hold a local copy of your library.

Thanks, got the first part done no issues DB rips right to Roon. Don’t see Apple Music being populated with the same rip however?

Also, every time I select a back up in Roon it errors? won’t let me select path or folder? also how do you get rid of dropbox as an option

Don’t see Apple Music being populated with the same rip however?

If you absolutely have to have your rips in Apple Music then you’ll need to either rip to ALAC or use dbPoweramp’s ‘Multi-Encoder’ to rip to both FLAC and ALAC (ie. maintain two separate libraries).

It’s a tricky one, FLAC is more portable / widely used (outside of Apple products). But ALAC is really your only option if you want to play lossless music in Apple Music. The downside to ALAC is some non Apple products may not support it. Both are lossless so sound quality wise it make zero difference (despite what some ill informed articles you stumble across on Google may state).

You can also convert between FLAC and ALAC (using dbPoweramp) without losing quality as both formats are lossless and both handle metadata well. So whichever way you go you can (fairly easily) batch convert one to the other without re-ripping everything.

Personally I use FLAC even though I use mainly Apple products. But if you know you’re going to be loading your music library into Apple apps then ALAC probably makes more sense.

If the only reason you want to load your files into Apple Music is for backup purposes (and given that I am not even sure if Time Machine will backup the files up this way) then I’d rip to FLAC and think about whether there is a better way to handle those backups. Have a search on here for ChronoSync (even if you don’t use it you’ll come across posts/users pondering the same question you are re. music library backups).

If having your rips working on Apple’s own apps is crucial, for example you use Apple Music on your iPhone when out of the house, then go with ALAC.

This is an old but useful thread on the subject ALAC or FLAC with Roon that may help clarify the best route for you.

With regards to Dropbox. I don’t use it myself, but I believe this is only used to backup your Roon Database (ie. your metadata, likes and playlists). It doesn’t back-up your actual music files/library — you’ll need to find an alternative means to do that. Something like ChronoSync suggested above to sync your files back to your Mac. Or alternatively store your music on a separate NAS and use the NAS own backup tools to handle the backups.

You can backup your Roon Database (not your music library) to other locations like your Mac, using the Backup tab in Roon. You don’t need to use Dropbox.

If you want to remove an existing scheduled backup to Dropbox that you have already set-up then go to Backups->Scheduled Backups->View-> : (the three dots menu) → Edit → Delete.

Have a search on the forums here as both your questions (How to best backup a music files on a Nucleus and FLAC vs ALAC) have come up several times previously. But hopefully the above summary proves useful. As always there are multiple options, some better or worse depending on your needs or setup.

Thanks, JAMIE for taking the time to answer in depth. I am ripping in AIFF and the files I had originally were WAV files as I have plenty of storage.

I really don’t have to have my library , thought it would be another way to back up with time cap. I have a 2TB Lacie portable I just connected to the Nucleus via USB. that will work as a back up.

Unfortunately I can’t get Roon to backup to it for some reason so I am working on that right now.
T

Room only does database backups. It does not backup music files. You will need to manually move the files over or use a sync program running on a different PC.