I just started my Roon trial, and I discovered a basic feature of streaming services is missing, the ability to see individually favorited tracks listed and sorted by date added. When you go to Tidal > My Favorites > Tracks, it does not have sorting options. When you go to My Library > Tracks and sort only Tidal music, it includes tracks from albums favorited as well.

Most days when I listen to music, I open up Tidal and go to my tracks list to listen to the songs I’ve most recently added to the list, then branch out from there. I’m in my free trial, and I won’t be renewing without this feature.

As an aside, 3 clicks to get to the tracks list is a bit much to get to the list, the ability to add this page as a bookmark is greyed out for some reason too.

If the albums are in your Roon library you can Fav the tracks.
I then go to tracks, select the heart icon and shuffle favourites a lot. It’s a great way to listen 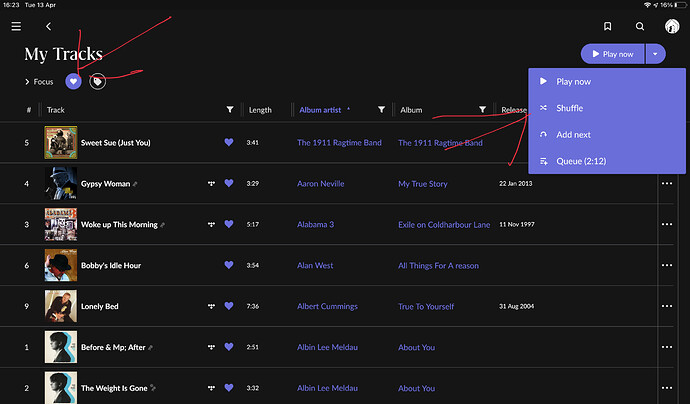 I’m in my free trial, and I won’t be renewing without this feature.

This reads like a threat. Also you reference this problem as a “deal breaker” in the title.

C’mon, tone it down. This style is offputting.

Bro I haven’t paid this company, and I’m sure my $10/month won’t make or break them. I know they won’t be able to get this pushed out in an update by the time my free trial is up, but I thought it would be useful to know that this feature on its own is enough to make at least one person not continue using the software after the free trial.

Useful, but I have like 1500 tracks in my tracks list, and then any time I added favorites to Tidal, I’d have to specifically find those tracks in the entire list to add them to my Roon favorites because the ones I just added wouldn’t even be at the top of the list.

I just add tracks I like as I listen to music and before you know it, there is a big list that is ever expanding…
you’ll probably just have to do the work unless I am missing something, you won’t regret it.
Like anything worthwhile, you need the initial investment but the benefits last for years…

I have already done this on Tidal, I don’t feel like clicking through them 1500 times to add them to Roon favorites

Well that’s how it is. It really is a non issue if the benefits of Roon are important to you. You will listen to the music anyway, so a few taps as you go is all it takes.
Whilst doing this you will also be finding more and more about Roon and how it works and discovering new music via Roon Radio if you choose. It’s a choice, but despite all the indications to the contrary we don’t live in an instant world.

I’m posting in a place that is for feature requests. I’m going to requests features that I find to be useful, and in this case necessary.

Roon is predominantly album based.

I’d imagine if it did what you want there would be many complaints. It’s a pretty specific user scenario that wants tracks liked as tracks differentiated from tracks liked in albums.

But sure as we all know Roon is not for everyone.

But Roon do you look at these future requests and I’ve been wrong before!

It doesn’t need to change anything about the current library setup. Just add a sort by date added function to the Tidal > favorites > Tracks list

I think people here aren’t getting my request. Every other 3rd party streaming service player I’ve used has done this natively at launch.

A possible work around is to go to the listing in Tidal and select all tracks. (Long press to select one and the top right select all!

Add these to the play queue.

Then select them all in the play queue and favourite them in Roon. This way all your 1500 Tidal favourited tracks will be liked in Roon and filterable and sortable.

Unfortunately, this will not add them in the order they were added in Tidal. So I won’t be able to sort by the date added as I am in Tidal. When I find music I want to hear later, I add it to my favorites in Tidal. Usually from my phone. So after I do that, I’d also have to check what I added in Tidal on my phone, find those tracks in Roon, and then favorite them in Roon.

They could let me sort the Tidal > My Favorites > Tracks list.

And in actual fact what I suggested won’t work it seems to only work with local data probably the conflation of liking in Roon and liking in Tidal to add to Library.

Indeed your suggested solution is probably the simplest answer to your issue.

I think my workaround is opening Tidal, adding my entire tracks list to a playlist (which will maintain the order of tracks) and then either just using that playlist in Roon (which entails adding tracks to my favorites and then again to the favorites playlist), or doing the same thing and then favoriting them all in Roon, manually adding them as favorites in Roon each time I add more tracks to my Tidal favorites.

Feature request backed by user use case is a brilliant idea. That’s how Roon evolves…