This is an easy feature, but would solve a super annoying behavior.

In my music library (and many others I’m sure), there is some bad metadata show whereby a classical composer (e.g. Bach) is marked as the performer for some albums. So it is super annoying that for these artists, Roon defaults to the Performer tab for this artist, so most of the albums are hidden by default.

A simple solution. For any given artist, show the tab (performer vs composer) for which the artist has more track or albums.

This would remove one of those many little irritations classical collectors (among others) are faced with.

I have opened up another FR to take this a step further. Why not have the option of switching off performer/production handling all altogether. It’s not adding a lot for classical:

In key initial “launching-pad” screens, the roon GUI is still prioritisng the “performance” or “production” contribution of classical composers rather than their “compositions”. This often leads to very bizare, confusing results with even the simplest searches of classical composers. A recent thread for example highlighted that Bach is credited with liner-note production

Really dumb question: are you not using the Composer browser?

It’s nothing to do with the composer browser. There are at least three examples of this:

The example in the linked post is about search. If you do a search on Beethoven, the correct link is the third one down. The top result is totally erroneous for me - an Artist called just Beethoven, from bad tags, and linked to his PERFORMER page. The second is PERFORMER Ludwig van Beethoven (who doesn’t exist), and the third is the one we actually want.

If the results have people who had 1000 compositions and 2 performances, the search results should default to them rather than to “Artists” going to their PERFORMER page.

All composer links in review texts default to the PERFORMER part of the composer page, even in the case of Beethoven. This is absolutely wrong, and is simply a bug or non-design. This has btw always been the case AFAIK.

The bug in iOS which was once fixed, has returned: namely that in some places, composer links go to the PERFORMER page for the composer. Maybe @vova can dig out the old ticket.

These three specific, isolated and separate problems give the impression that Roon defaults sometimes, often, or even always, to the wrong part of Composer Details pages.

@joel - No, not using the composer browser. Using search. If I know that I want mozart, I don’t browse for him, I search. Browse is for discovery, search is for getting what you want.

@tripleCrotchet +1 on hiding performer / composer altogether. That would be better in almost all cases. Even for modern composers who sometimes perform (e.g. Phillip Glass) I’d be fine with the view squashed.

No, I don’t use the Composer browser either. Mostly, because I find it unusable.

Apparently I have 14,441 composers. So I gave up on scrolling. Then I tried filtering. Beethoven gives me 663 compositions and takes me to a composition screen laid out similarly to the equally unusable box-set screen. I tried randomly clicking on [351-40] or [601-650] but there are no visual clues and I cannot really engage with an experience like that, so no, I don’t use it.

Most of the time I use “search”, but I see now that I am using it for a “fuzzy” browsing experience because in the absence of a useable browsing alternative I can relate to, that is the best I can do. If I ignore all the production and performer clutter and click “View All Albums”, I at least get a large display of album art with plenty of visual clues and a ‘sort-of’ record shop experience. I think this is at the root of these requests to switch off the performer/production functionality, especially for classical off, altogether. To be honest if I had the option I would switch it off for pop/jazz as well. But this time I would switch off composer/production instead of performer/production. It is just not a very successful part of the roon GUI.

Apparently I have 14,441 composers. So I gave up on scrolling. 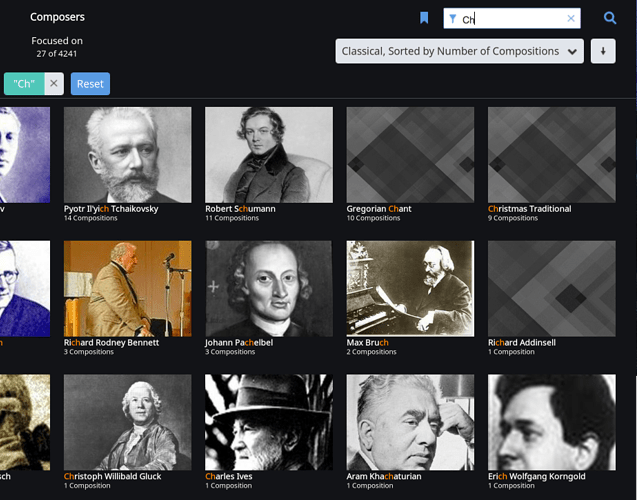 I’m wondering how many of these come from your file tags.

Since my 1.3 upgrade I’m having all sorts of problems with roon so I just didn’t see the classical switch. Makes a big difference. I am down to 719 composers. But I still have very few visual clues as I am missing so much artist and cover art since the upgrade. I have raised a ticket but maybe you have seen this before and have a suggestion?

I cannot check everything but I only ever made an effort with my classical composer tags. So I randomly checked a Santana album and I found roon has 9 composer credits for this track (I have none in my tags, which is what I expected): 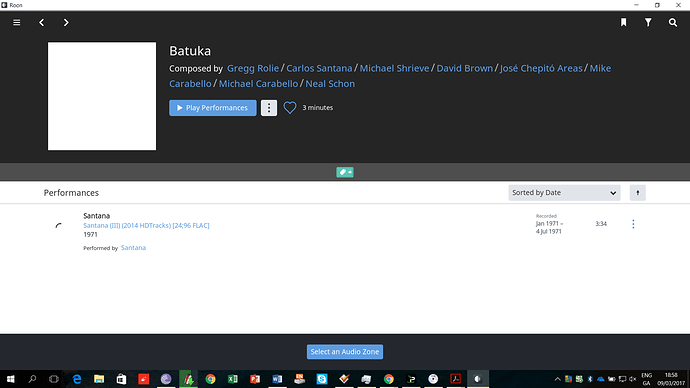 You can see here again I have no artwork. I checked and in this case it is both embeded and there is a folder.jpg. Getting the artwork working will obviously bring big improvements but I would still stand behind the request to selectively switch on/off performer/production, composer/production depending on Genre as for most people this is very specialist. The sort of thing “completists” go in for.

Also, rather like the box-set screens the composer browser only really works where there are a limited number of disks / compositions. In the case of box sets maybe 10 or so disks. With the composition browser may 2/3 screenfulls. I have the impression they are using essentially the same logic? So browsing Beethoven by composition doesn’t really work and neither does browsing the DG Complete Beethoven Edition. The work around I have for box sets is I group only by volume and then tag all the volumes as part of a “tag=box set”. With the DG Beethoven Complete Edition I end up with something usable with visual clues so, for example, I can easily locate the “Late Beethoven Quartets” instead of an incomprehensible 87 disks and trying to remember they start at disk 54: 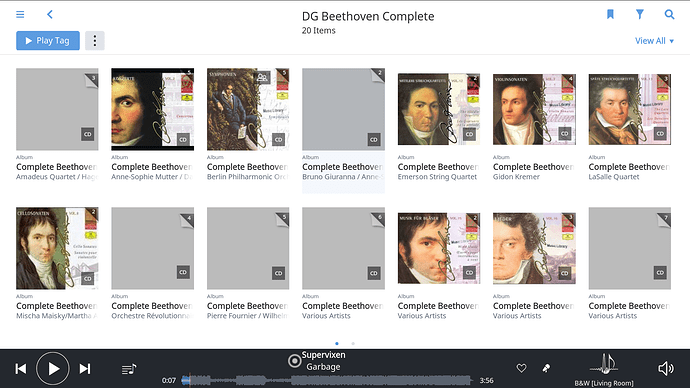 But doing this is a lot of work. Surely roon can do something along these lines but in a much cleverer way?

Then I still have thousands of composers, so I need to sort by # of compositions. And sure, I could bookmark it then, but I never use bookmarks. When you know the composer you want, search is king.

@Joel any update on this? Seems like a really simple feature to implement and it would be a huge improvement for me.