A current case in point is the an album by Bedrich Smetana, which will only sort under B unless I make the Album Artist “Smetana, Bedrich”.

“Bedrich Smetana” exists under composers as is assigned, by Roon, to sort “Smetana, Bedrich” but Roon doesn’t seem to recognise it from there & make use of that information when it’s used as the Album Artist.

Am I missing something? Is there a switch somewhere that I need to toggle?

Try these settings in settings/general: 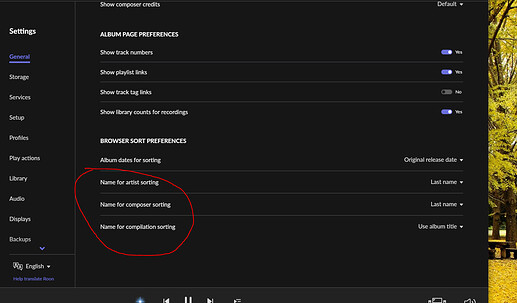 Or, as an option, if you don’t want a global setting you could try switching the names in the fields. (put the last name in the first name field etc.)

Hmm. I do have it set like that, but Roon doesn’t seem to recognise a composer name when it’s used in the Album Artist field.

I don’t deal much with classical music, but all artists and composers have a Name Sort field where you can enter a last name followed by a first name. Example: Smetana, Bedrich. Then if you specify to sort by last name it should sort by S. Roon does a pretty good job with most metadata getting the Name Sort field right, but sometimes it’s wrong and sometimes it’s just empty. So these have to be corrected manually by editing that field for each composer (or artist). Having said all that, I’m curious why you want your albums sorted by composer? If you want to see all the albums by a specific composer, why not search for that composer in your Composer View, then select his/her Discography?

They do all have a name field that can be entered & assigned. It’s just that Roon doesn’t seem to recognise composers when they’re used in the Album Artist field.

I’ve pointed out this distinction in each of my replies so far & am hoping that someone who knows for sure will come along & say either “Yes, Roon should recognise the first name last name thing for a composer in the Album Artist field & therefore you have a problem” or “No, Roon doesn’t recognise a composer that way in the Album Artist” in which case I’d say Roon has the problem.

I’m pretty sure I’m doing something wrong. I’m just trying to figure out what it is.

As far as why I might choose to sort my music the way I want to? I only do this for classical composers. I just like to scroll through & have them in alphabetical order alongside all the other artists. Besides, Roon’s search function is something that’s been discussed on here over & over. It needs work.

LOL, I put my own name in for the artist and it sorted it by the first name (even with the sort set for last names), then I tried a known artist that was in my Library (and sorted properly by last name) and it did the sort by the first name there, too. I also noticed that there are some albums that it uses the first name and some where it uses the last name. It seems kind of ran-dumb? Maybe it has to do with what is in their database for known artists and or “identified albums” versus customized albums? Seems like Roon devs need to chime in and see what is going on.

Roon has no way to know if the text you enter into a field is a composer or an artist. Many artists are composers and vice versa. Maybe you can post a screenshot of an album you’re trying to edit, say the one by Bedrich Smetana. The key entries should be in the edit section as below: 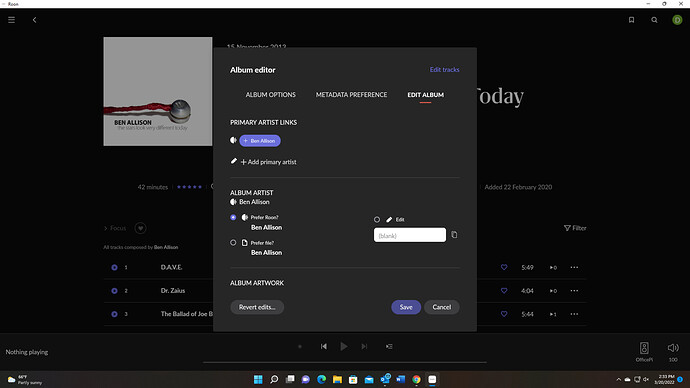 2022-03-201920×1080 123 KB
It’s my understanding that Roon sorts using the Album Artist field but it will only sort properly (consistently) if you have the Sort Name field in the Artist record configured properly as below: 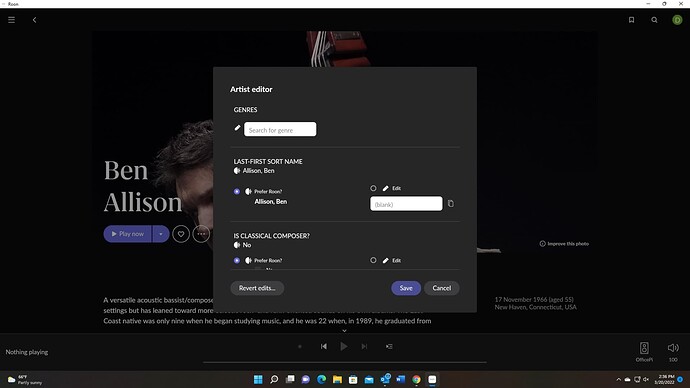 I am pretty sure you cannot do what you are trying to do. It may partially work with performer/composers like Leonard Bernstein and a few other living composers with large performance catalogues that roon is aware of. Those performer/composers do seem to be treated differently in certain scenarios. Maybe roon will chime in on the details. Although there is a convention in other players and a lot of public metadata that Classical composers are tagged in the album artist field roon that causes a lot of problems in roon.

There are feature requests going back years to be able to sort by composer (in the composer field) in the album view but it doesn’t seem to be straightforward:

Can you guys pl-ease give us sort by Composer in Album view? It’s the only thing that makes sense for Classical 95% of the time. Artist may be of interest to focus on a soloist or ensemble some of the time. Sort by date for any reason is a non-sequitur basically. Album Title may be ok some of the time, but nothing beats perusing a collection by Composer (last name). There have been discussions on this and suggestions at other ways to look at it, all are more complicated and problematic. Pr…

A common workaround is to put the composer(s) into the album titles so that you can at least sort and filter on composer by album title. 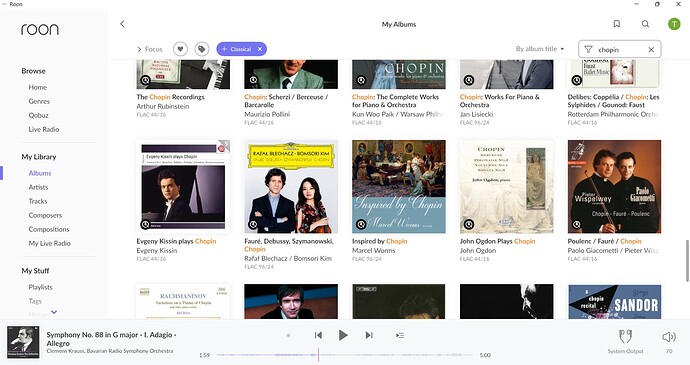 I think Roon hit on a pretty solution in 1.8. Composer’s view gives the option to ‘show only classical composers’ or ‘all composers’. You can also ‘Focus’ for ‘periods’, ‘genre’, ‘country’, etc. Pretty powerful slicing and dicing, and solved my original request. Better than mucking with titles and things imo, ymmv.

Yes, I have checked that & the Sort Name is configured correctly.

I have tried adding the name into several other places, as per the suggestion of @tripleCrotchet, & adding the composer as a primary artist actually works quite well because if the same names appears in the Primary Artist & Album Artist fields, Roon does not display the name twice. 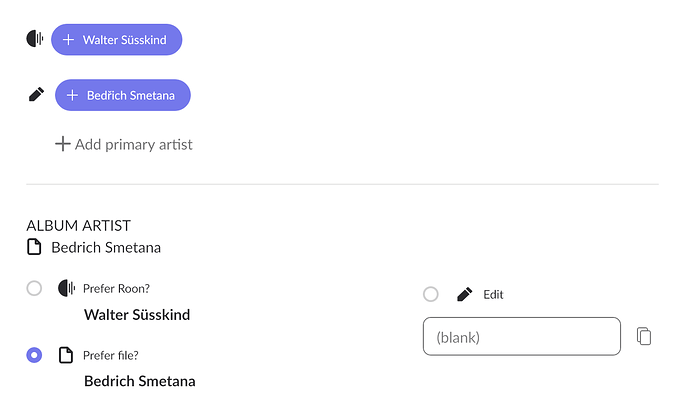 I’d call that a result!

I have tried adding the name into several other places, as per the suggestion of @tripleCrotchet,

That is not my suggestion. Not sure how you thought that. I do 180 degrees the opposite and go out of my way to remove composers from album artist and primary artist fields as I don’t want Smetana or Bach or whoever treated by roon as a performer.

A common workaround is to put the composer(s) into the album titles so that you can at least sort and filter on composer by album title.

This got me thinking. So thanks anyway.

It is possible - I do it all the time
Edit the Album information in Roon so that the Composer is added as a “Primary Artist”
If the File Album Artist is the same as the Primary Artist Link, then the sort criterion of the Artist works as expected. See picture. 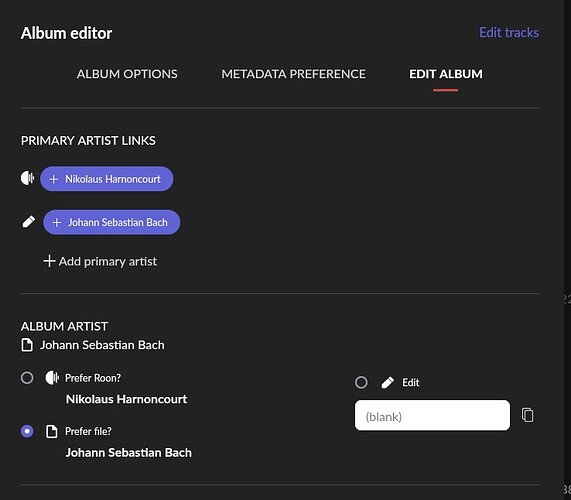 Note: Roon assumes that only performers can be album artists (why?), so it will add the album artist as a performer.
Multiple Albums can be edited at once (provided they share the same Album Artist)

Not sure confusing composers as artists is a good idea!

So others reading this are clear, using a consistent album titling convention to help with roon navigation is not the same as tagging fields with data for which they were not designed just to get a screen formatting result. Roon fields usually have a meaning that roon uses to build the links between its object model. For me, its the whole point of roon. I only assign composers to album artist fields in the specific example where the recording was by a living composer who did indeed conduct or otherwise perform his own work. For example, I like modern Classical music so if all composers were catalogued as both composers and performers then it is now ambiguous who the conductor actually was and I will have to refer to another source if I want to know. I don’t like being annoyed with roon telling me that Bach and Beethoven were recording artists either.

Thanks Ralph. If you scroll up a bit, you’ll find that’s exactly what I did.

Given the fact that Roon does not have a properly functioning Album artist field, I could do as you suggest and use a consistent album titling convention to navigate in Roon.
The Album title would then need to be Sort Album Artist:Album Title as a concatenated field:
eg
Beethoven, Lv:Piano Concerto No 3
Barber, P:Nightclub
Queen:Night at the Opera

Looks weird, but I guess it would work

Roon does not have a properly functioning Album artist field

What do you mean?

I find the Album Artist field is a very successful blunt instrument for getting my collection into the order I want it.

All of my soundtracks have an Album Artist entry of OST, followed by the name of the film or franchise. That way, they sort in the same order as they do on my shelves. Regardless of year of release, regardless of composer. This is the order I want them in.

I know that artists & composers are not the same thing but in Roon I use the Album Artist field to force sort things how I want them, so that when I scroll through, everything is where I would expect the physical item to be. Except that in Roon I can’t put all the classical music into a different cubboard, so the alphabetical lists are merged & I don’t find that a difficult concept at all.

In Roon, the “artist” field for a classical item would be occupied solely by the performers, orchestras & conductors. Complete box sets devoted to a single artist (Maria Callas, Herbert von Karajan, Claudio Arrau, etc.) would have that artist’s name as the Album Artist. But otherwise, I’ll keep all of the work of a given composter together using Album Artist. If I want Poulenc, Prince & Prokofiev to sort alphabetically, Album Artist is the place to do it. (It’s also handy for keeping all the Prince albums together, regardless of whether they are by Prince & The Revolution, Prince & The NPG, The Artist Formerly Known As Prince or just plain Prince.)

So others reading this are clear, using a consistent album titling convention to help with roon navigation is not the same as tagging fields with data for which they were not designed just to get a screen formatting result.

So others reading this are clear, I’m absolutely only interested in a screen formatting result - one that matches my physical collection - & couldn’t give two hoots about Roon navigation.