Network Details (Including networking gear model/manufacturer and if on WiFi/Ethernet)
Wired Gigabit, endpoints both wired and WLAN.

Audio Devices (Specify what device you’re using and its connection type - USB/HDMI/etc.)
Happens on most endpoints, but as an example this is my Aries Mini (on 5Ghz WLAN)

Skärmavbild 2020-06-18 kl. 13.00.001770×204 32.2 KB
I have never seen this message before and only very seldom experienced a delay between pressing Play and audio coming out of the speakers.
It’s not an issue as such, just another of these “features” that makes Roon more and more slow and cumbersome. 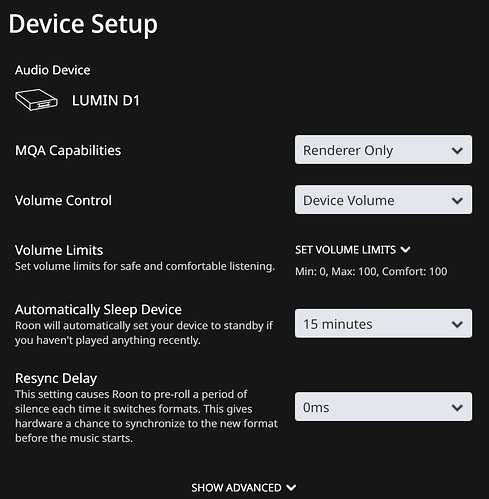 Sorry Wiz, no such option for either the Aries or the Hifiberry DAC+ I just installed… (which I suppose would mean they cannot go into hibernation on Roons account?)

Hmm, correction of the previous statement;
This seem only to affect the Aries products? My Mini and G1 behaves the same.
The Hifiberry DAC+ does not (over WLAN)

I seem to recall Aries devices perhaps had this power down option but I might be mistaken I guess.

It’s not an issue as such, just another of these “features” that makes Roon more and more slow and cumbersome.

For some devices this might be a few seconds, other devices take longer, but the change here was give additional feedback and be clear that playback will start soon – it’s not making playback start slower in any way.

That said, if you think it’s showing up too soon we can look at that.

Error message on play action screen without any error during title loading process
wizardofoz (Mr Fix It aka The Wiz) June 18, 2020, 2:29pm #8

Thanks for the feedback!
I haven’t noticed any delay in earlier versions, Roon has always seemed to react immediately when i clicked the Play-button. I might be wrong and the Auralics have always had this one-two second delay? I cannot say.
I have never seen the message previously though, thats for sure.
And yes, the timing is not great. The playback can start at the same time as the message appears also.

And still, this is no biggie. I would prefer not seeing this message though. It’s a bit like crying Wolf! when theres no reason. (The start has never taken more than 2-3 seconds anyway)

That said, if you think it’s showing up too soon we can look at that.

I think this has been adressed? At least i’m not seeing this message any more.
This was almost always popping up simultaneously as playback started on my Auralic Aries’s (i have three different ones). Not that there was any delay to speak of, in those cases.

Yes, this was resolved

Hello All, As @Michael_Nosbuesch noted, this issue should be resolved for AURALiC endpoints. If you still encounter this behavior feel free to open a new thread. -John