This happens occasionally and I’ve tried to see what the common characteristics are between those albums that get deleted along with their duplicates, but haven’t been able to discern them. Has anyone else experienced this?

A couple of more instances since the original post. Not always, but it seems to be the general condition is there are 3 copies of an album, two of which are duplicates. Deleting the first dupe goes fine and leaves the original album and 1 duplicate. Deleting the remaining duplicate often results in the album being deleted, too.

Can you tell us the exact steps you’re taking to delete the albums?

I look at classical albums after clicking on Genre. Here’s a spot with some albums in need of being addressed. 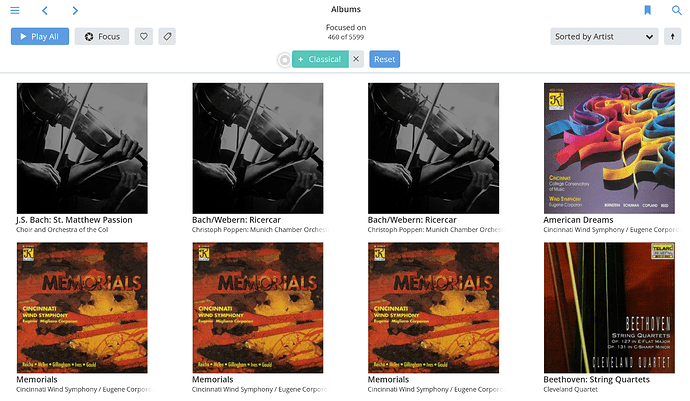 The three albums “Memorials” are what I’ll focus on, deleting two of them. When I open them this is what they look like. I can play tracks on each of the three albums. This is photoshopped to put all on the same page. 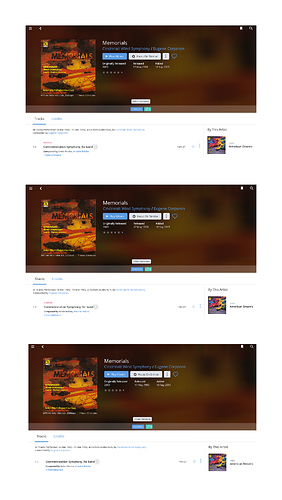 Can you click in the “other versions” box of the example given and post the close up of that? Am interested to know if they are all discrete albums and individual folders. If that is the case then there should be zero chance of an album being removed if it wasn’t selected to be removed.

Here’s the window. Interestingly enough, when I clicked on the other version button it showed just two versions. And when I released the window, the third version was gone in the album list. 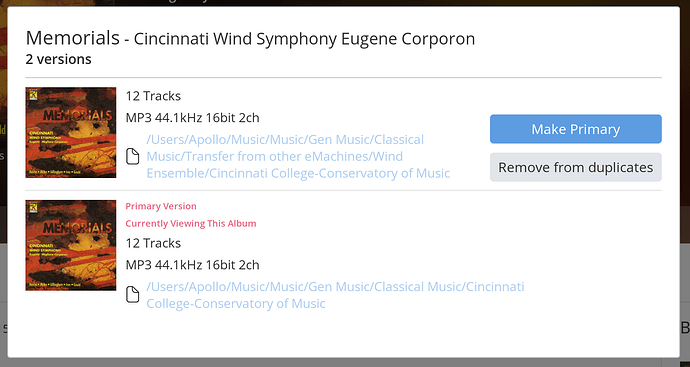 You’ve shown me another way of looking at duplicates that appears to resolve these ghosts.

Shoot. Third version is back. 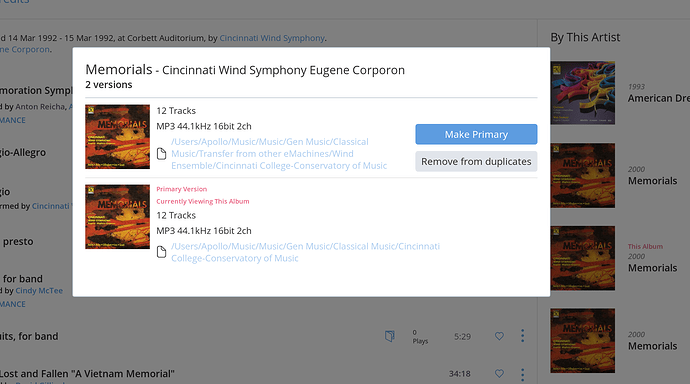 You’ve shown me another way of looking at duplicates that appears to resolve these ghosts.

If you have three copies of an album marked as duplicates, you’ll normally see 1 copy in the album browser. If you turn on Show Hidden Albums (in Settings), you’ll see all three copies.

If you’re focused on a duplicates, you will also see all three copies. If you delete 1, you’ll still be seeing 2 duplicate copies. But if you delete another copy, you’ll see no copies because the single remaining copy is not a duplicate, and your focus is set to only show duplicates.

Does that make sense?

I’m not quite getting it. So based on my original description of how I arrived at the albums: when I click on “Genre” then click on “Classical,” if I see three albums, such as 3 copies of Memorials, and 2 say “Duplicate” next to the tracks and 1 does not… you’re saying there are only really 2 albums there?

Hi @jlo ---- My apologies for the slow response and the confusion here. I’d like to take a closer look into this issue for you and will be contacting you via PM with instructions on how to perform an excel dump of a list of your albums.