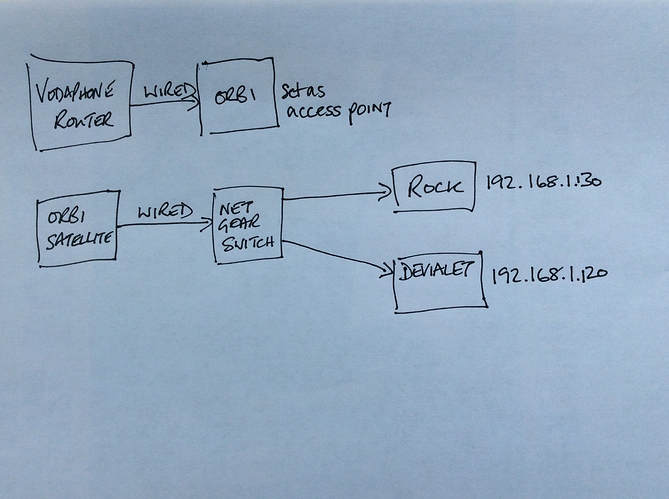 Having a nightmare, my Devialet keeps disappearing. It all started this morning when I moved the Ethernet cable to the Devialet to another port on the switch as I was getting dropouts and pauses. Until today everything had been perfect. I’ve switched everything on and off, reset the Devialet multiple times and rebooted the core but to no avail. I’ve changed the switch as well. The Devialet shows in Roon audio and then disappears, if I try to play an album it disappears. Any suggestions gratefully received

Possibly a duplicate IP address? If you haven’t already done so, it might be worth re-booting whatever runs your DHCP server (which I guess is either your Vodaphone router or the Orbi AP connected to it).

Done that too, several times.
This is strange Rock on the iPad has a different IP address to that on the Roon iPad app?
Logged on with my laptop and now ip address is the same on both

I can ping ROCK but the Devialet is unreachable??
Also when I log onto my router ROCK has 2 ip addresses? Should this happen? One is wireless the other ethernet so that’s not an issue.

It sounds like a bug in the Devialet FW. I have experienced similar issues. I would suggest sending a message to the Devialet’s customer support.

But why would it have worked without issue for the last 6 months?

Well after the… probably double figures of resets of the Devialets

Good to hear that it works now. I had to reset my Devialets similarly every 3-5 days to get this issue resolved… until I sent a message to Devialet support and got a beta FW where this bug has been fixed. I never got his issue with the beta FW anymore.

What other features did the new firmware have?

Did you have WIFi and Ethernet enabled in the Devialet configurator?

I’m glad that things are working for you now! Please feel free to reach out if you see any issues return. Happy listening

It looks like I may have had both enabled, I did a new config whilst troubleshooting though

When using Ethernet you have to disable WiFi otherwise you will experience the bug!

It contained only this bug fix.

Can you ask them when they will finally release the next firmware - quite a large number of severe bugs are around since Feb. 2019(!) including Roon RAAT etc