Did my internal HD fail? It's missing

My music folder seems to be gone. No internalstorage folder is seen on Windows File Explorer. How can I troubleshoot it? It’s a 2TB HD installed internally inside an Intel NUC NUC7I5BNH. System has been running for 2 full years.

I had been attempting to setup a backup sync to a QNAP NAS, but had problems. Now the folder is gone, but I’m not sure if it’s a case of the internalstorage folder being somehow deleted, or if the HD is actually unrecognized by ROCK at this point. 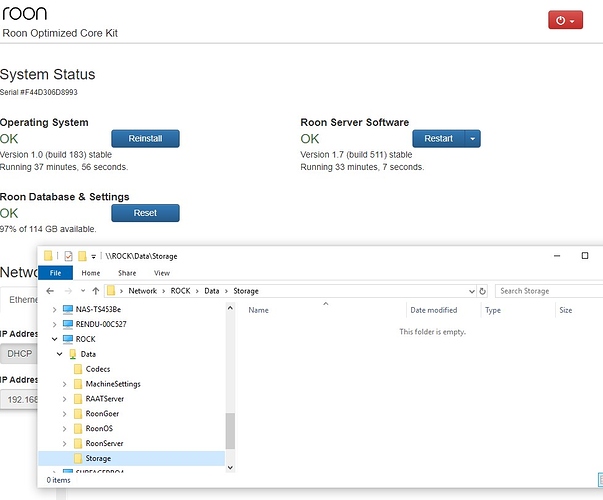 For starters reboot the nuc

Not sure what file system does ROCK uses

My music folder seems to be gone. No internalstorage folder is seen on Windows File Explorer. How can I troubleshoot it?

No drive in the web admin page is unfortunately a bit ominous. First try a reboot, otherwise try a new drive. You may be able to mount and recover the drive on a Linux PC, but there’s no Roon guide for doing this in the knowledge base.

I would note that ssh into rock is not going to work, it’s a locked down os with no login.

First thing try reseat everything in the Nuc just for kicks.

Maybe check did the bios sees it too

I would also try the drive in an external usb case to see if the Nuc sees it there.

Thanks for the replies. Nothing had changed on a reboot, and I couldn’t SSH in using PUTTY.

I removed the internal 2TB (non-SSD) HD and put it into a USB3 enclosure. It WAS recognized when plugged into the NUC’s USB port & ROON indexed the songs.

Guess my best option now is to leave it in the external case plugged into the USB port, as that does seem to function properly.

I may try putting a different empty SSD drive internally and see if anything different happens.

OK, this gets weird.

Thanks for listening to my problems!

LOL. I do have music & database backups so I should be able to eventually get it back together.

But I’ve got further problems. I removed the storage HD. The Roon app could not connect to the ROCK server at all, multiple reboots no change. Decided to do the O/S reinstall from the Web admin page. That did not complete successfully, now I can’t access the ROCK at it’s fixed IP address. Looks like I have to start clean. Guess I’ve got my project for the New Years Day holiday.

There might still be a way out of fixed IP address if you private message support - but it sounds possibly like you might have a NUC or maybe power issue - reinstall is easy enough to recover if you have backups anyway.

Well, the 2GB HDD that was installed internally failed totally. After trying it inside and outside, It stopped working in the external case. The HDD could not even be reformatted or intialized in windows disk manager. It’s trash. And 4 months past the 2yr warranty.

Added another HDD into an ext case and all is well now.

And 4 months past the 2yr warranty