Awesome Ruud! Thanks for the verification! I can’t wait to start trying that myself! 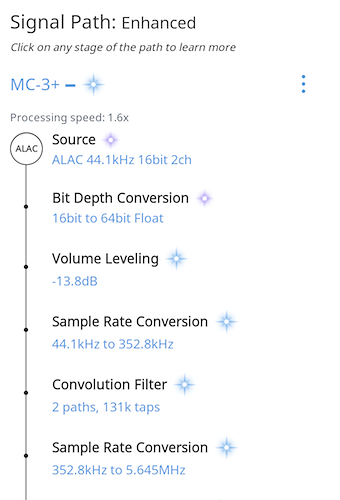 Can you share a link for these files? Not sure where to get them.

I’m interested in Acourate. Have a friend who swears by it, but he is not a Roon user so he can’t tell me about the integration.

Can you outline the steps you take for this integration? What do you do in Acourate to export a convolution file so that Roon can use it?

As for learning how to use Acourate, I understand that is a bit of a chore, but I’ll have to roll up my sleeves on that…

You have to export it as Wave 64Bit Stereo. You can select in Acourate which Sample-Rates to generate(44.1 to 192kHz).

Then create a .zip file with the filters for the sample rates you need and do upload it to Roon. Roon then automatically selects the right Filter.

To create a filter follow the steps in this guide:

Various folks experiences with REW and RePhase in this thread.

There is also an excellent ebook on amazon on acourate usage.

Reading about Acourate.
I note they do not like a USB mike, since they contain an ADC and do not have good time control.
What are your experiences?

Of course I can buy a new mike. It will be my fourth, because of lack of compatibility…

I know, i have an umik-1 but bought an mbnm 550 el to use with acourate.
So i now have an usb mike and an analogue one. Hope that will be enough for a while, but you’re scaring me with 4…

The first two were for closed systems that didn’t provide calibration curve.
The mbnm, it needs electronics to connect to the computer, I assume?
Where, and how much?

When I emailed they said umik-1 was fine…

An analogue mic has to have an ADC somewhere…

Aha.
Ok, I’ll try.
Not inexpensive, but I’m the one who always argues that these software solutions are dirt cheap compared to high end hardware, so I can’t very well complain now.

I am just starting to dabble, so far from an expert, but my understanding is that it depends on what you like to do whether it matters.
Just adjusting the frequency plot works fine with a usb mike.

However, if you want to go so far as to do time alignments, then there is a big benefit (if not a must), on having the same dac & clock for both the out and inbound signal. I use a motu 828 mk3 to send the test signal to my speakers and for the microphone in.

@Uli_Brueggeman is the expert though. Not sure he checks in here actively, but lets see

I asked him directly, and he confirmed what you said, that there is value in having clock sync between input and output, and using the USB mike loses that. But there is a compensation procedure that he described to me (set the sample rate to 48000.32258!). He said the process sometimes confuses beginners, I asked him to describe it, and for sure it would have been a challenge.

In any case, I realized I can’t achieve clock sync because I use Meridian gear, which means I have an all-digital signal path with four DACs in the speakers, behind a DSP crossover – there is no chance of clock sync with the PC mike channel. So I’ll have to do that.

So I’m ordering it. I have experimented with REW and I don’t have much success. Sure, I can tame the big room modes, and mostly get within +/- 5 dB of the target, but there are still deep cutouts. I read the Acourate documentation, and I noted that he sets the target below the measured response so he can straighten it all by pulling down, no peaks. I tried emulating that process in REW, looked good but the results were awful.

Thanks for your help. I’ll report my results when I have them.

Btw, I tried moving some furniture around, it did change some peaks and valleys but didn’t reduce them. And absorbing panels are out of the question…

No DRC can eliminate nulls, it can only assist in taming peaks.

Sure, not talking about nulls. Only about valleys where you can set the target below.

My real question is about the range. Most writings agree that you should only aim to correct below a few hundred Hz, but Uli’s process of setting the target below the valleys of course requires full range correction. He told me it works fine. I’ll test it as soon as the software arrives.

Had Dirac running full range when I used it. Sounded great to me.

Back from vacation and beginning to experiment.
Stuck on the first step, hope somebody can help.
@rovinggecko you had some success…

I use the UMIK-1, @Uli_Brueggeman and others tell me it works.
I have the mic plugged in, Windows sees it, REW sees it and is able to measure with it.
But Acourate does not see it. In Mic Alignment, it says No mic channel available. (Things seem to work generally, for output I plugged USB into the Meridian but Acourate came up by default with another driver and said No device, when I changed to Meridian it was happy.)

I can’t find any device setup dialog anywhere in Acourate.

You would need to use asio4all as the driver. This should enable you to select the umik-1 in acourate.

Damn, yes I remember that.
Thanks.