Directory on QNAP NAS not available to Roon

I have a problem adding a folder from my NAS Drive (QNAP). Roon Rock lost the connection to the NAS when I had to do some work which involved the NAS being out of action for a while (checking the file system after a power failure). There are two directories on the NAS (the format is determined by by Naim equipment). Roon Rock said today that I had not imported any files - that is it had lost all the files (over 3000 albums) it had imported 13 days ago. I checked storage settings and it said “this directory is not available” about both folders. After a while it made contacted with one folder and has imported all the albums. But I cannot get it to make contact with the other larger folder. I have removed the folder several times and added it as a new network share adding all the passwords but with no luck. What can I do please? Obviously in future I will power down Roon Rock on my NUC before doing any work on my NAS drives.

Can you post an image of your storage settings? 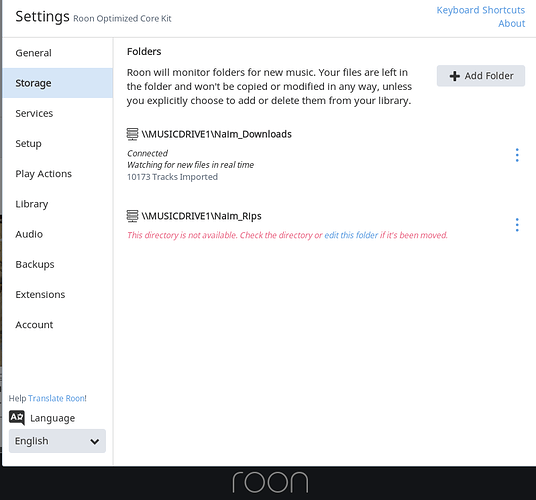 No idea whether this has worked

Hey @Paul_Mason — Thanks for reaching out!

Are you able to access \\MUSICDRIVE1\Naim_Rips over the network from other machines? Have any permissions or share settings been changed on this drive?

Yes I have checked the NAS drive files and I am currently playing music from the ripped folder on the NAS using JRiverMedia - from my desktop to my Naim player. All seems to be working fine.

Thanks for confirming that, @Paul_Mason.

Since this has started have you tried power cycling your NAS and ROCK device?

Yes I have earlier and I have just restarted again it with no effect.

Dylan - I have just tried again and Rock is now importing files from Naim_Rips! No idea why it has done this.

A post was split to a new topic: NAS watched folder not available in Roon