Disconnect between metadata and Roon

I’m looking for some help in understanding how to tweak metadata in order for albums to display correctly in Roon.

Here’s an example of what I mean. The album is Richard Strauss’s Sinfonia Domestica, etc conducted by Wolfgang Sawallisch. This is how it displays in Roon. 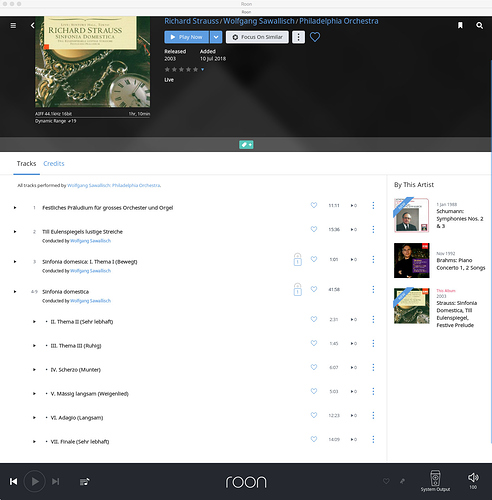 Track 3 should be integrated with tracks 4–9 – they are all the same piece of music. Here’s the metadata. 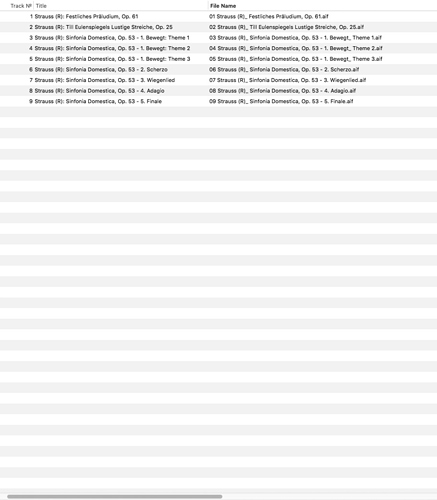 I cannot see what’s causing the problem here. Any ideas or suggestions?

More generally, how does one perm track metadata to create a group of movements under a single piece of music?

Any help much appreciated.

@Philip_Gibson This one is a simple typo “Domesica” that I’ve made an edit for on MusicBrainz. This prevents us from recognizing that the track is part of the composition.

You don’t have to do anything in this case. I should say that the typo was on the recording not the track and I’m not sure if I’ve got it 100% right, but I’ll check back once my edit has been applied (in 5 days) to confirm.

Thank you, Joel, not least for such a quick reply.

To pursue the subject I raised, here’s another of my albums, which Roon treats a bit weirdly, so I’ve asked Roon to prefer the original metadata. Here’s the metadata. 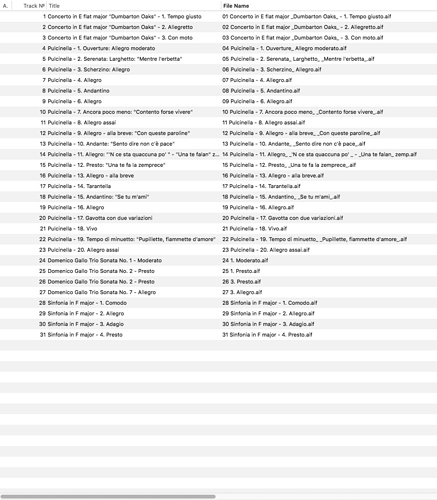 And here’s how Roon displays it. 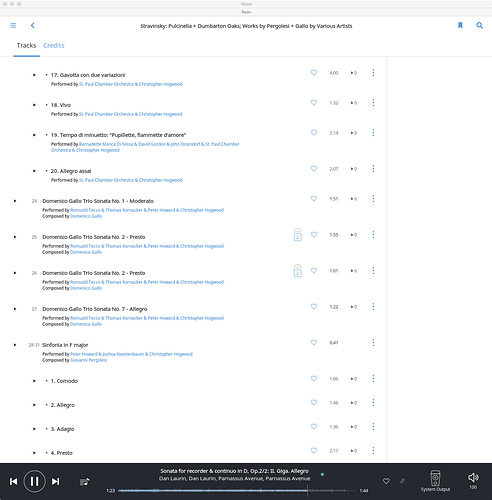 Tracks 28–31 display as they should. But tracks 25 and 26 don’t – they appear as two separate pieces of music rather than two movements of the same piece.

Please could you explain what’s going on here and what syntax I should be using to nest movements/tracks under a single piece of music?

Roon does not divulge “what is going on here” but I can help with the fix.

Use WORK and PART tags as per the Roon KB.

However, I can also report that your results may not be uniformly positive. Roon is “slow” or “reluctant” to reflect WORK and PART entries in some cases.

@John_V I know you mean well, and editing may be required, but please give us a chance to assist the OP before sending him down the editing route. Thanks.

Hi @Philip_Gibson. If you take a look at your file tags, you’ll see a mistake in the title for track 26: it says Sonata No. 2, not No. 3. The reason Roon is not treating these four tracks as a multi-track composition is because it’s detected two identical contiguous track titles. If you correct the title for track 26 (in your file tags), I think it will group properly.

@Joel. Thank you for pointing that out. The album in question is one I’ve just ripped from the CD in my collection. I set the sonata number for track 26 to 2 because that’s what the insert and liner notes say.

Let’s assume that the liner notes are correct… Is there a way of grouping the two movements under the one sonata without resorting to the editing @John_V suggested?

Thank you, @John_V. I’m using an app called Meta on my Mac. I can’t see a way to achieve what you’re suggesting so I’ve written to the developer asking if it’s possible.

Here’s another challenge I’ve come up against this afternoon. Roon has correctly identified this double album of concertos by Vivaldi. 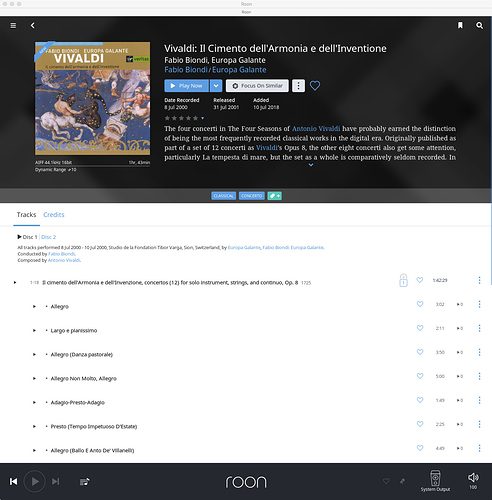 But instead of grouping the movements under concertos, it offers just a list of the movements. Changing preferences to File rather than Roon under the Metadata tab seems to have no effect at all. But surely it should do, because this is how the metadata currently look? 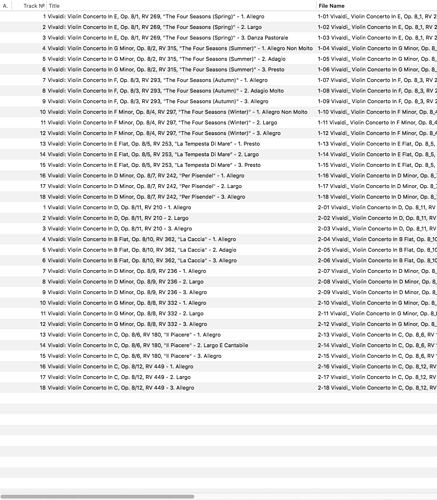 I would set the track titles to the following:

If the album is unidentified (is it?), then Roon will try to detect multi-part compositions based on common (non-identical) track titles.

That did the trick, thank you @joel. FYI, Roon had already identified the album. Hopefully you can help me solve my latest challenge too!

I’m afraid that Roon can’t help you…yet. This is actually the main example that I use in internal discussions within the team. Quite simply, classical music like this needs to be given a hierarchical treatment. Concerto 1 (and 2, 3, and 4) can be considered as a concerto in its own right (Op. 8/1), as part of _ Le quattro stagioni_ (Op. 8/1-4), or as part of Vivaldi’s entire Op. 8. Why shouldn’t we be able to view the music at each level in the hierarchy with the possibility of level-specific descriptions etc.?

Your only real option at this time is to use WORK and PART file tags to re-define these 36 tracks as 12 separate concerti, and to Prefer File for Multi-part Composition Grouping for the album in the Album Editor.

I really hope that this will happen, but it’s not imminent.

@joel. Well, that’s disappointing. I became a lifetime member in the last month and I’ve noticed quite a lot of unhappiness among those with classical music collections. Now I know why. This does feel like a pretty fundamental and important issue so I’m surprised that it seems not to be a priority. Is there a way of helping you to persuade your colleagues to do something about it? It sounds like they’re aware of the issue but intending to ignore it indefinitely. Please let me know. Thanks, Joel.

I’ve done a lot of posting lately, mostly about classical collections (going through my ripped CDs; long story). The more I see, the more I appreciate how complicated things are.

I’m pretty happy with Roon. There are areas for improvement, but Roon is a good product.

I found another possibility. Are you familiar with the album identification wizard? There is a digital download version of this album which has a single disc with 36 tracks, but a different level of concerti grouping which might be more to your satisfaction.

I’ve heard this mentioned a few times now. What is it?

I think it is this:

Ah. I use that all the time. I didn’t know it was a wizard. Thought there was something I had missed.

I only use it with unidentified albums (or at least try to) and bought digital/downloaded classical works to get better metadata (so linking it to a physical release).

I ignore all other wrong metadata. In general Roon does a pretty good job, but then again I have very few classical works.

@joel. Thank you for looking into it for me. Unfortunately I can’t find that version with the album id wizard. What search terms were you putting in?