Hi @Christoph, thanks for your reply.

So apparently it’s more Android than device related. Useful to know that the issues can also happen on Android 4. I never had them on Android 6.

Can someone from @support help us out?

Hi @Jan_Koudijs and @Christoph ----- Thank you for the reports and the feedback, both are appreciated!

I wanted to touch base as we’ve done some testing in house and are able to successfully use Roon on a Nexus 9 running Android 7 without issue. Jan and Christopher I just want to make sure I understand exactly what each of you have tried / are currently working with.

Christopher, you are using a Nexus 9 with Android 7.0 on it but have also noticed this behavior when using your Samsung tablet running Android 4 as well. Is this correct?

I appreciate the clarification from you both and if there are any other details (or devices) that you feel may be relevant to this data gathering process, and can help aide in our evaluation please share your thoughts

Hi @Eric, thanks for your reply.

The most prominent issue for me is the slow loading of the Discover screen, it currently prevents me from using it. I haven’t had the missing characters issue over the last few days, if it happens again I will try to make a screenshot.

I’m about to start using the just released update of the Roon app, if it behaves differently I will let you know. If there is anything else I can do, please let me know.

I just had a ‘not responding’ message after waking from standby and the option was given to send feedback. I did this, the message starts with ‘Roon isn’t responding (thread 14627)’, system logs are included.

I hope that you can access this information via your Android developer account, and that it will be of any help.

Hi @Jan_Koudijs ---- Thank you for following up and my apologies for the slow response. I’d like to gather some logs from your Pixel C device and will be contacting via PM momentarily.

Just noticed that there is already a separate thread for the missing characters issue (point 3 on my list):
https://community.roonlabs.com/t/roonremote-on-android-tablet-is-missing-letters/8218
Unfortunately no solution yet.

I never had it to the extent as shown in the screenshot of the OP. The impact for me is probably still limited due to the restart issue I have.

Still I consider this a workaround because the 8 days battery life will be gone by now. Would be nice if development can have a look why the app isn’t compatible with battery optimization.

I will be updating my notes with this information, as we have a meeting scheduled for mid week to discuss this issue.

Are you noticing any patterns that cause the application to end up in this state? Any feedback would be greatly appreciated!

Hi @Eric, Thanks for getting back to me.

I have no new discoveries to report. I think the issue is best summarized by referring to what I wrote in the PM that contained the log files…

The behavior is quite reproduceable.
I let the tablet switch to standby during playback, then wait for about 5 minutes and have at least one song transition within this time, then I switch the tablet back on. When the Roon app is running in the foreground then most of the times I get a ‘lost connection’ message, when it is running in the background with for example the Chrome browser on the foreground then I get most of the times a restart.

…And what I wrote a few posts back

The battery optimization setting gives a big improvement but doesn’t solve the problem. I still have a few restarts per day.

Is there a restart captured in the log files that I have sent you? In case you need a log from a specific situation, please let me know.

Concerning my setup, my endpoint is a PS Audio DirectStream DAC. In case you haven’t tried, this DAC in combination with the Nexus 9 running Android 7 should be pretty close to my setup…

Hi @Jan_Koudijs — My apologies for the confusion, I appreciate you clarifying that for me

I went back and looked through my open tickets and PMs and saw the information you were referencing. Thanks again!

I’m having the same problem Jan reported with the Discover feature, also on a Pixel C with Android 7.0: “The Discover screen opens up with some big gray squares and it takes at least 10 seconds to load, during this time the app is not reacting on scroll events and button presses.”

My Pixel C is generally working fine with Roon, although not as snappy as my Oneplus One phone on Android 6.0.1, on which the Discover page works without any hitches.

What could I do to fix this?

Thanks @Bluebeat for confirming the issue.

I increased the ‘Memory for Photos/Artwork’ setting from 64 MB to 512 MB but it doesn’t improve the performance of the Discover screen. Strange thing is that all other screens load fine…

@Eric, I’m using a non-default setting for the lock time that is used after the tablet switches to standby (Android setting), this setting seems to have an impact on the restart behavior.

In ‘Settings->Security->Screen lock Settings (cog symbol upper right corner)->Automatically lock’ I have set the time to ‘30 minutes after sleep’. I did this to prevent locking of the tablet during a listening session. As a test I changed the setting to ‘Immediately after sleep’ and also enabled the battery optimization for the Roon app again. With this setting it seems to work more stable.

@Jan_Koudijs ---- Thank you for the feedback and the reproducible steps

I met with my team today to discuss this issue and typically when a device is only seeing “gray boxes” this means we tried to load a cover on a remote and couldn’t do it quick enough. With that being said my I ask you for the following:

@Eric, to answer your request:

Some remarks:
I understand that there is not much more you can do then displaying a gray box if the image isn’t in yet, but I would not expect that this will lockup the complete user interface.

On my Nexus 7 (2013), that is running on the same network, the loading of images is quite smooth, only the scrolling isn’t very fluent but this is probably caused by the limited resources. The Nexus 7 is running in phone mode.

@Bluebeat has a similar experience when comparing the Oneplus One and Pixel C.

Marc, can you describe your network and the hardware/os of the Roon Server? That way we can see if you and Jan might have some environmental things in common.

My RoonServer is a Gigabyte Brix GB-BSi7HA-6500, which runs on Lubuntu. Music is on a Synology DS213. Both are connected with a Netgear R7000 router, which is also connected to a Sonore MicroRendu. The network is hardwired, mostly through run of the mill Cat 5e cable, except obviously for the remotes - the Pixel C and Oneplus One. 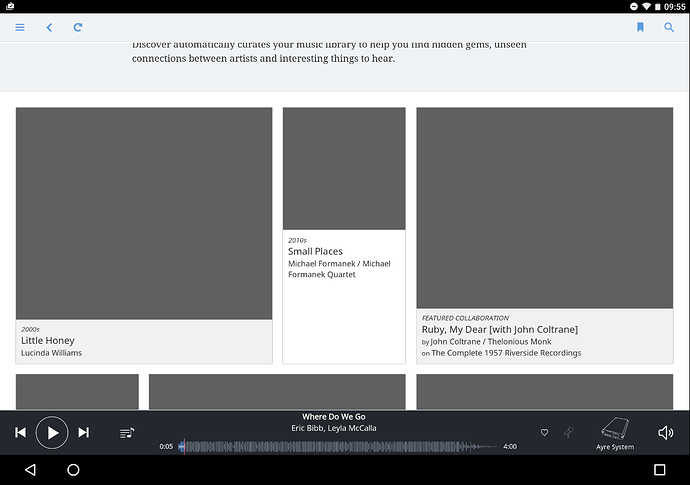 @Jan_Koudijs & @Bluebeat ----- Thank you for the follow ups and taking the time to answer my questions. Both are appreciated.

Marc, I see you are noticing this same behavior while using the Oneplus device as well. @Jan_Koudijs, I know you mentioned early on that you did not have this issue with the Nexus 7.

Hi @Eric,
No, the Discover feature works fine on my Oneplus One. See my first post in this thread.
Marc